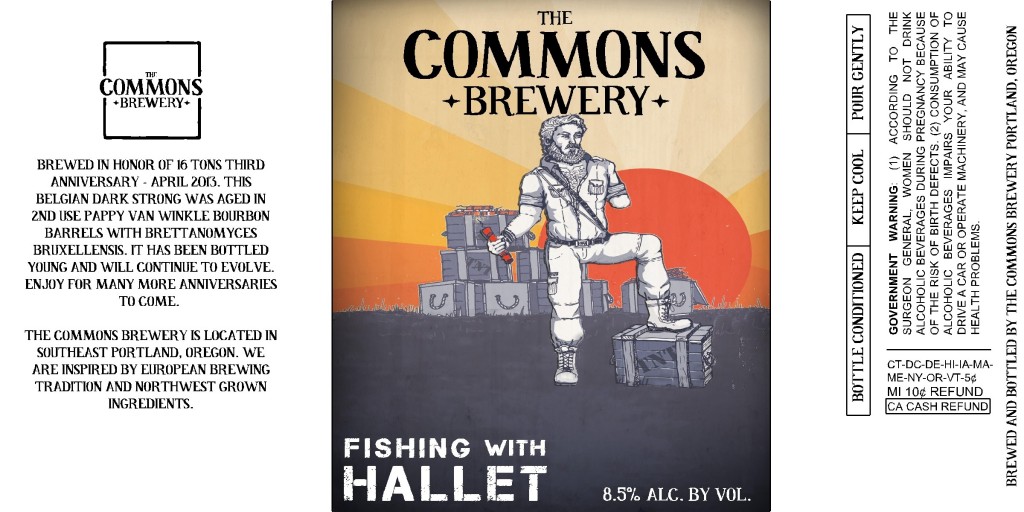 Portland, OR – The Commons Brewery will be releasing bottles of Fishing With Hallet for Eugene’s 16 Tons Cafe & Taphouse with two events on June 22nd and June 23rd.

Keeping with the 16 Tons tradition of naming their anniversary beer after one-armed authors, Fishing with Hallet was inspired by Belgium’s Jean-Pierre Hallet, a naturalist famous for his work in the Congo, which included fishing for predatory crocodiles with dynamite.

Fishing with Hallet is a Belgian Dark Strong ale aged in 2nd use Pappy Van Winkle Bourbon barrels with Brettanomyces Bruxellensis. First fermented with yeast cultured from De Dolle Brouwers, this is a nod to their Oerbier and is currently rich and malty with a touch of floral Brettanomyces character. The beer was intentionally bottled young and is meant to be stored at cellar temp to allow the Brettanomyces to continue developing.

Fishing with Hallet will be released in Eugene at 16 Tons Cafe on June 22nd at 3pm. Join us for special taps, a complimentary toast and tastings of other Commons bottle conditioned beers.

750ml bottles of Fishing with Hallet will be $14 at each location.

16 Tons Cafe is located at 2864 Willamette St., Eugene, OR. For more info about 16 Tons check out their website: sixteentons.biz.

For more information please contact Josh Grgas at josh@commonsbrewery.com or 971-295-1026.