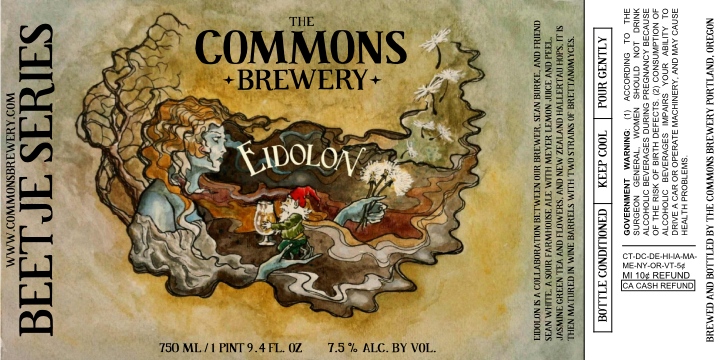 The Commons Brewery of Southeast Portland, Oregon continues to wow palates with their award winning beers. The young brewery has just announced the release the second beer, Eidolon, in their Beetje Series, a tribute to brewmaster and founder Mike Wrights humble garage nano-brewing roots (Beetje translates from Dutch to mean “little one.”)

The second Beetje release is a tale of two Seans – The Commons own Sean Burke, and former Cascade and Alameda brewer Sean “Seany Wonton” White, who is now living and brewing in his native Ohio at Jackie O’s Pub & Brewery in Athens. This beer would make an excellent addition to Sean/Shawn/Shaun Fest coming in the not so distant future. Here’s the full details including release date and pricing from Wright:

Portland, OR – The Commons Brewery will be releasing their second beer from the Beetje Series Friday August, 17th at 5:00pm. at the brewery.

Eidolon is a sour, barrel aged amber farmhouse brewed with meyer lemon peel, jasmine green tea, jasmine flowers and New Zealand Hallertau hops. The beer was allowed to mature on two strains of brettanomyces in red wine barrels, then blended back together and packaged in 750ml capped bottles. 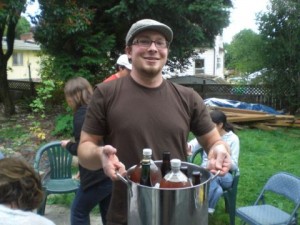 Eidolon is a collaboration between our brewer, Sean Burke, and friend/brewer Sean White, who now brews for Jackie O’s in Athens, Ohio.

The Beetje Series pays homage to The Commons Brewery’s garage roots. The brewery started in Mike Wright’s garage in 2010 on a 30 gallon system as Beetje Brewery, which roughly translates to “little bit”.

Eidolon is only available in 750ml capped bottles and will cost $12 per bottle or $135 per case.