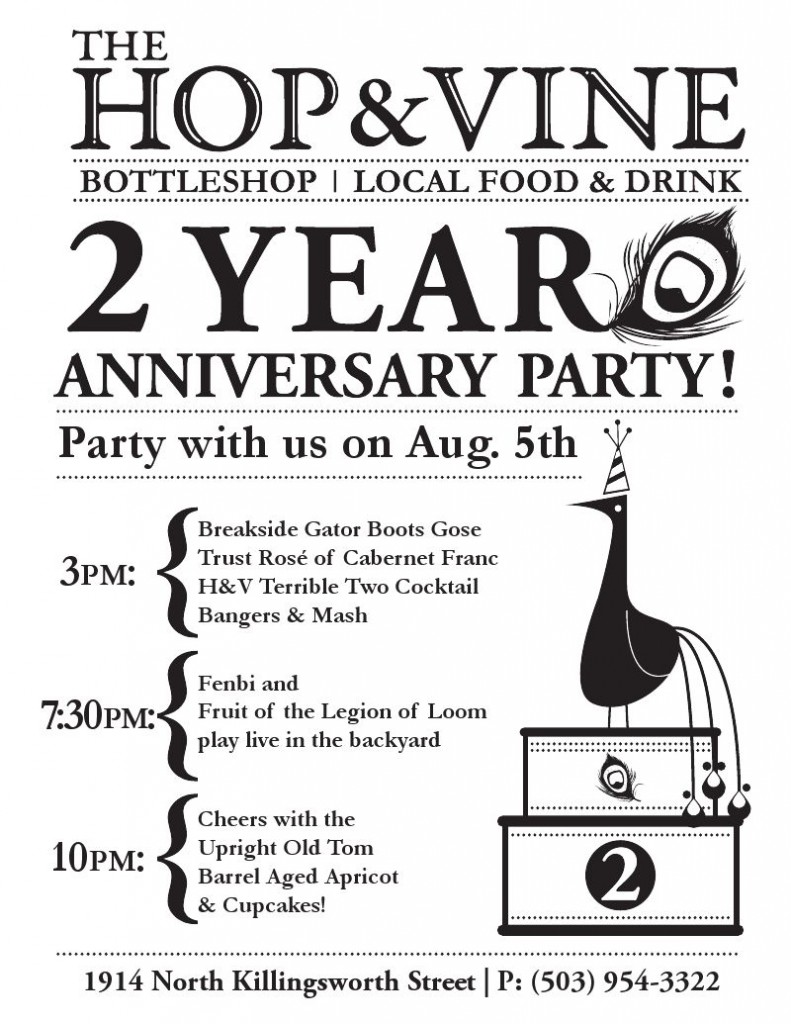 Maybe you know The Hop & Vine for their touted food or the pairings. Maybe you know the place because you love craft wine and beer and make it a destination for a multiplicity of craft libations. Hopefully, you know it. In August 2008, proprietor Yetta Vorobik brought a new vibe to the North Killingsworth Street’s Overlook neighborhood, bringing a potpourri of artisan aliment and potation. Others have since followed in Vorobik’s footsteps, making the once somewhat secluded and workaday corner a destination for foodies of all the city’s five quadrants.

Thursday August 5, 2010 marks The Hop & Vine’s second anniversary, with a special day of events to thank faithful customers and hopefully allure new ones. An expanded back patio allows for outdoor relaxation at picnic tables while barbecued treats sizzle. Beginning at 3PM, The Hop & Vine will feature an assortment of special drinks, live music, and mouthwatering foods to pair. Beer geeks will be pleased to get their first taste of Breakside Brewery‘s beer, a German-style Gose dubbed Gator Boots Gose, named for Vorobik’s official business LLC. The pub will also feature Upright Brewing‘s Old Tom Gin barrel-aged beer that made a big splash at the Oregon Brewers Fest’s buzz tent.

We sat down with Vorobik to ask her more about The Hop & Vine’s past two years and what she foresees for its future. 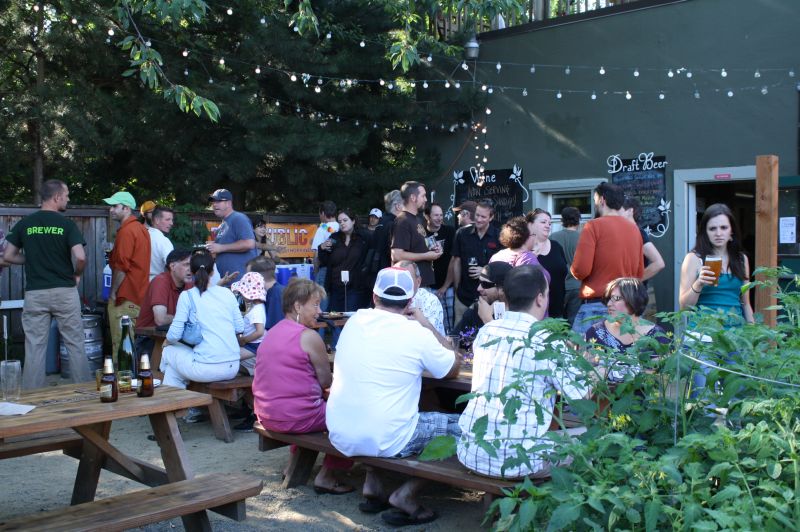 Congratulations for making it two years! How has the second year of The Hop & Vine gone for you?

Yetta Vorobik: This year has been pretty fantastic. There have been so many amazing new fermented beverages coming out, luckily I think my liver has been able to take it.

When you opened did you have any expectations/goals for the pub within the first two years? Have there been any surprises pleasant or otherwise?

YV: When first opening up in 2008, I just wanted to be a neighborhood bar and bottleshop in an underserved area. Over the last two years we have tripled the size of our bottleshop, added liquor and expanded our food menu. I’m always surprised when people tell me they drove from Hillsboro or Battleground to check it out. I think the biggest surprise is how much food we sell, it was a secondary thought when first opening but now I have a lovely crew that does a wonderful job at creating new menu items. 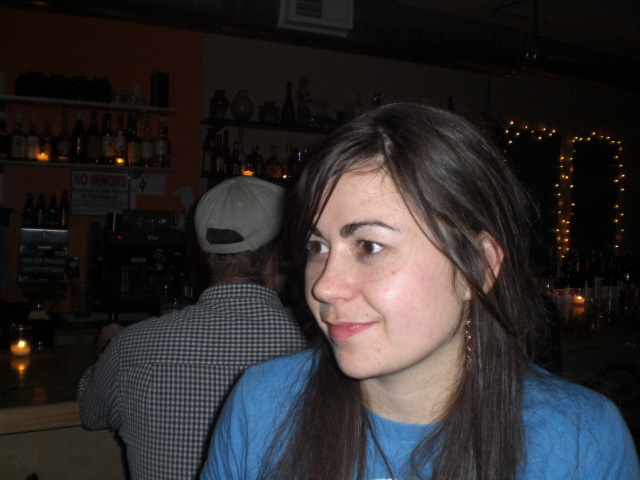 We notice you’ve recently expanded Hop & Vine into not only the studio space adjacent to the pub, but also you’ve done a great job opening up the back patio to make that more spacious as well. How do you think this will impact Hop & Vine?

YV: As the Garden Patio is still a work in progress… My hope is to have it completely finished by next summer, adding more screenage around the fence, fire pits and perhaps an awning, so people can still enjoy the outdoors during the rainy months. Creating more seating and a welcoming ambiance, will hopefully bring in more peeps. 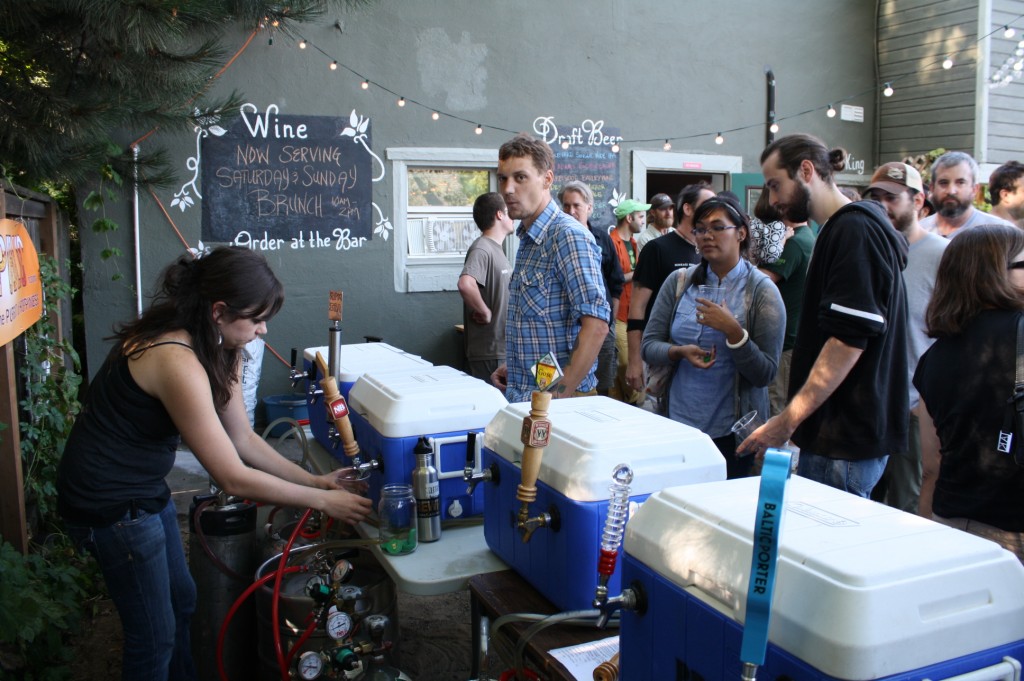 You’ve been hosting a lot of craft beer and wine events ranging from dinner pairing to meet the brewer trivia nights. What are some of your favorites that you’ve had a hand in over the past year?

YV: I don’t have a real hand in the trivia nights, however they are always a great time as it is a relaxed and learning environment. The dinner’s over the past month have been amazing and delicious. I have had guest chef’s pair some of the dinner’s and paired one myself, it is always fun to see where different palate can take you.

For people who still haven’t been to The Hop & Vine, how would you describe the ambiance and overall experience? What should folks expect?

When you walk in the door don’t expect to be greeted, there are peanut shells all over the floor, and consider floaties in your beer a snack…..(laughs). I think the ambiance of the bar is what I want my living room in my house to be: inviting, warm, cozy and comfortable, situated around a very large selection of beer, wine and distilled spirits. The staff is knowledgeable, friendly & unpretentious. Food is simple, local and fresh, we try and keep the menu changing with the seasons and pair well with beverages. Guests always talk about the backyard being like their own, there is a small vegetable garden in the center, picnic tables throughout and a large cherry tree to shade during the hot summer days. 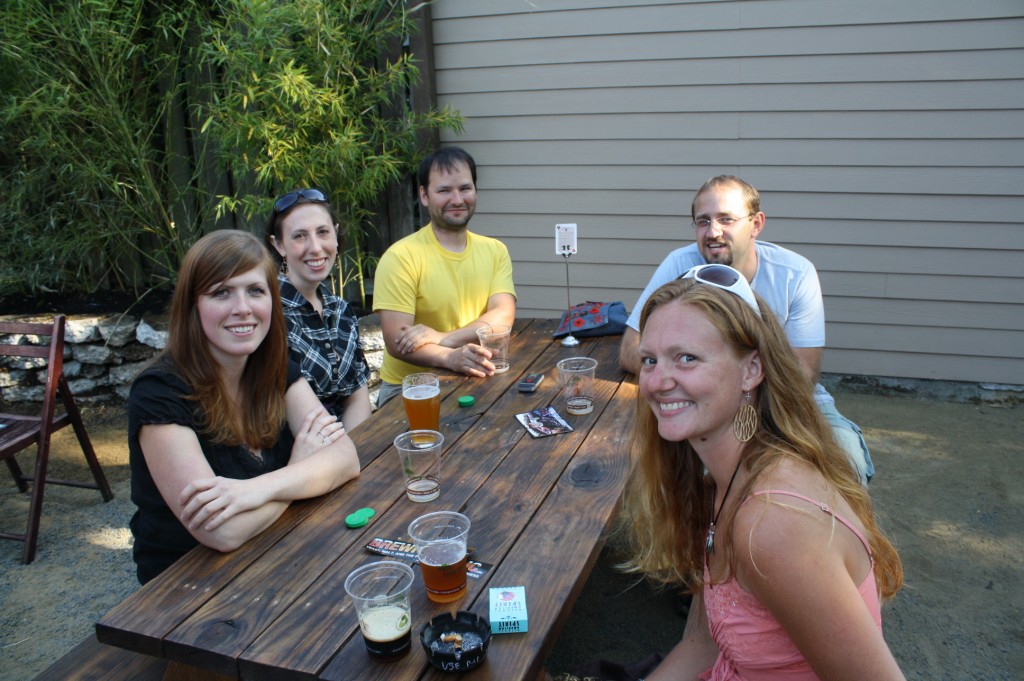 Recently, there’s been a lot of talk about women enjoying craft beer more in recent years than ever before. What do you attribute this to? As a woman in the craft beer industry, what has your experience been in an industry that has for so long been predominantly focused on male brewers and consumers?

YV: There are so many areas to consider on this topic, we can go back to the discovery of fermentation, of a woman letting her bread over rise or just over the last five years the craft beer industry has exploded, with it marketing towards women. After having a good chat with Morgan Miller (Ninkasi Brewing) today, another idea was that beer in the past has primarily been lagers that are made by huge corporations, these beers were both not marketed towards woman nor palatable. Therefore as the craft beer movement has grown; there are more varieties of beer available that have a broader spectrum of flavors, hence woman have better taste than men (laughs).

My experience in the craft beer industry has been nothing short of amazing. Everyone is kind and open. I’ve never really had to consider my sex while working with others in this industry. I’m constantly learning new things about beer, fermentation and the wonderful people involved who create and distribute.

Name five beers you’ve had on tap since last August that you’d cite amongst your favorites. 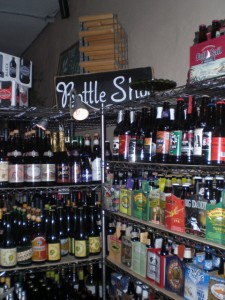 Tell us about your anniversary party on August 5th. You’ve got some interesting beers like the Breakside Gose and the Upright Old Tom’s Gin barrel aged brew. What kind of vibe can folks attending expect? 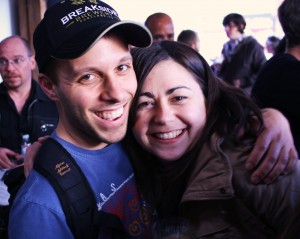 The vibe as always should be pretty chill. We open at 3PM with several specials. Ben Edmunds of Breakside Brewery made us a Gose. Just on Monday he had Magnolia (Vorobik’s coworker and roommate)  I add in the Lactic Acid to sour the beer to our taste.  All the proceeds of this beer will go to the Oregon Humane Society. Jacob Grier made up a Terrible Two Cocktail with House Spirits Aquavit and we will be serving one of our favorite rosés (and my favorite grape varietal) Trust Cellars Rosé of Cabernet Franc made by Steve Brooks. The crew in the kitchen are doing a special of bangers and mash. In the backyard the Fruit of the Legion of Loom & Fenbi will be kicking off music at 7:30PM. Alex Ganum of Upright Brewing has been so gracious to allow us to use his Barrel Aged Anniversary Ale for our two year anniversary toast at 10PM served with cupcakes. The anniversary ale was aged in a Ransom’s Old Tom’s Gin Barrel, I haven’t been able to try it yet, but I heard the beer has picked up some of the spicy characteristics of the barrel. Beyond that I hope everyone has a great time.

Looking forward to year #3 and beyond, what are some of your visions for The Hop & Vine?

I really hope to expand the bottleshop into the gallery by next summer, it would be so much fun for the neighborhood, my staff & I to have a larger bottle selection and expand into items like mead, saké and ice wine. For now I would like to keep seeing The Hop & Vine moving forward, having more Sunday dinner pairings, trivia nights and tastings.

Excellent. Thank you, Yetta. We look forward to celebrating your second anniversary. Hope to see all of you there as well!