Ever since Full Sail Brewing Company turned 21 years old, they have been involving their production brewers in a cool project called Brewers Share. This unique approach to brewing allows for creative input as well as the production of small batches of specialty styles and one-offs. These draft only brews puts the control into the hands of those who, at most large scale breweries, often don’t have this sort of creative say. According to Full Sail’s Brewmaster Jamie Emmerson, “Brewer’s Share is a great way for our brewers to show off their skills. Since we launched the program last year we have had a wide variety of fantastic beers including a Malt Liquor, a Dark Summer Weizen, an Alt, an IBA, an ESB and now a sour Berliner Weiss. As an independent company it’s great to have the freedom to brew these special beers and as an employee-owned company you can bet you have an owner’s passionate involvement every step of the way. At Full Sail we believe it is always good to know who makes your beer and we take that belief one step further with each Brewer’s Share.”

The next Brewers Share release will correspond with American Craft Beer Week, a nationwide celebration of artisan brewing. This round’s selection of Berliner Weiss (aka Weiße) is a recipe of Full Sail brewer Chris Haveman appropriately dubbed Chris’s Summer D-Light. According to Haveman, “(Summer D-Light) was inspired by my love of summer. When I found out that my beer was going to be brewed at the beginning of summer, I immediately thought of the perfect style, a Berliner Weiss. This is an easy drinking unfiltered beer made with 50% wheat malt, a tiny amount of hersbruker hops and a touch of lactic acid to give it a refreshing tartness.” Served straight this style has a sour tartness with a dry finish. A German tradition is to offer a splash of sweet woodruff syrup, called Waldmeister, for a fresh herbal character and a bright green color or sweet red raspberry syrup to provide a striking red beer with raspberry overtones. The syrups help to mellow to the sharpness and acidity of the beer, so be sure to ask for “Red” or “Green”! ABV 4%. IBU 9. 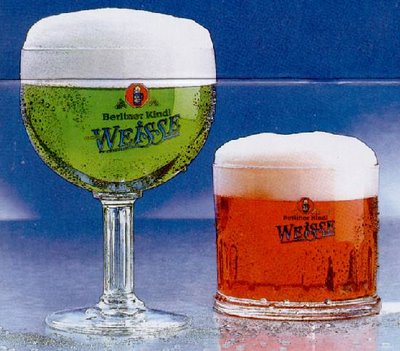 Chris Haveman and other Full Sail brewers will be on hand for two “Meet the Brewer and the Beer” events hosted by the brewery at their two locations. The first will take place at the Riverplace Brewery in Portland on Monday, May 11th from 5:00 to 6:30PM and the second at the Full Sail Tasting Room and Pub in Hood River, on Thursday, May 14th, from 5:00 to 6:30PM.