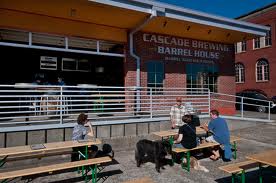 This weekend at the Cascade Brewing Barrel House in Southeast Portland, patrons can soak in the sunshine on the outdoor patio while quaffing on three refreshing beers. These are beers that promise to pair perfectly with summer. Hooray!

Summer Gose 2011: This NW sour beer is a re-creation of a historic German wheat beer style that was nearly lost to time.  This light, slightly soured beer is spiced with coriander and sea salt.   Soft creamy wheat and spice greet you in the nose, while a light spice bite and hint of lemon cross the palate.  It finishes off with a soft lingering sour bite and just a slight dusty lemon note. 5.5% ABV, $4.50/teardrop glass.

Summer Solstice: This IPA is our nod to the Summer Solstice. Glacier and Cascade hops set the tone, followed by Falconer Flight hops.  Bright citrusy hop resins and spice greet you in the nose.  A balanced resin and citrus bite on the palate is followed by malt and biscuit notes that trail off with a lingering hop finish.  Like the season itself, this beer is limited. 6.3% ABV, 65 IBUs, $4.50/Imperial Pint.

Spaten Franziskaner Weiss Beer: Weiss beers are noted for their crisp carbonation levels and zesty wheat flavor.  This beer features notes of soft wheat, banana and clove in the nose.  Slight hints of coriander and clove on the palate give way to a soft lingering creamy wheat finish with a slight clove essence.  This is great as a summer sipper or a palate refresher. 5% ABV, $4.50/teardrop glass.