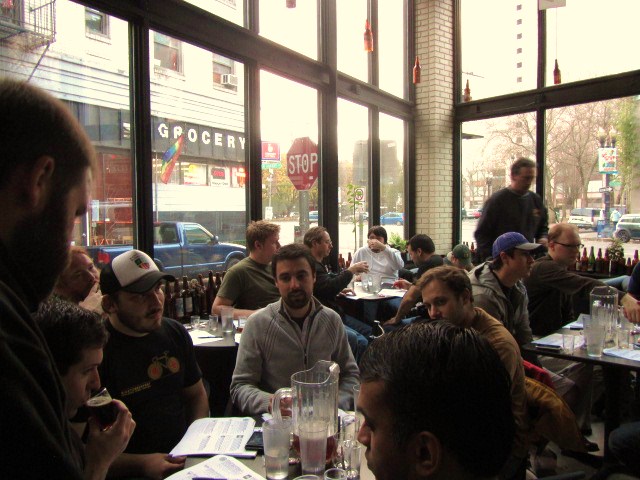 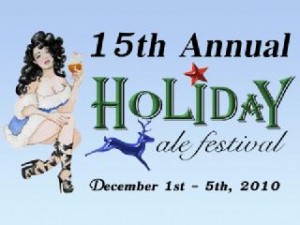 Since 1995, The Holiday Ale Fest (HAF) of Portland has been a major force in perpetuating the sentiment about cold weather brews in Beervana. Since 1998 when HAF was revamped by current owner/beer evangelist Preston Weesner, the winter solstice brew fest has evolved and unfolded into one hell of a party. Now in its 13th year under Weesner and company, HAF is arguably bigger, badder, and bolder than ever. With 47 mainstay beers on tap and 16 special tappings (i.e. vintages, blends, things that Weesner has been stashing to blow your mind), the now five-day festival under ever-growing heated tentspace at Pioneer Courthouse Square denotes rotating palate pushing winter warmers on an extensive and geek-centric roll call of brews. 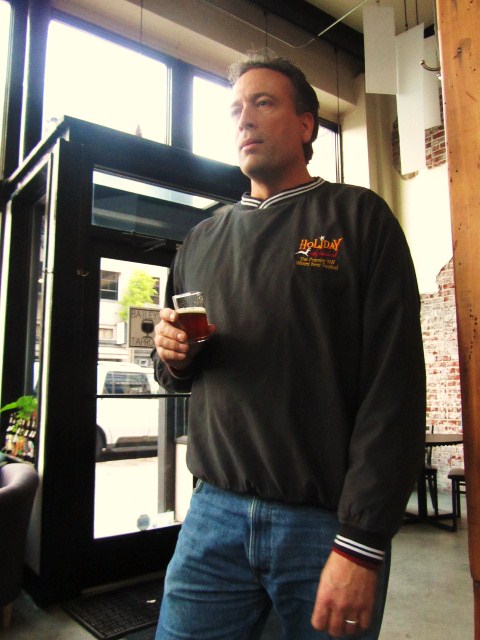 At the tail end of Thanksgiving weekend, Brewpublic was granted a sneak peak (rather taste) of a baker’s dozen of mainstay brews to be featured at this season’s celebration of great beer. Here’s our take on some of the best beers HAF has to offer:

Block 15 Figgy Pudding, Olde Stock: If you haven’t been living underrock, you might be cognizant of the fact that Block 15 was all about the rave during the November 19-21 weekend. Now their first bottle release unfolds in special form. This English-esque strong ale features Brettanomyces yeast aided by Brandy barrels. 11% ABV with 44 beefy BUs, kicked off a bold nutmeg essence with some dry molasses innuendos. 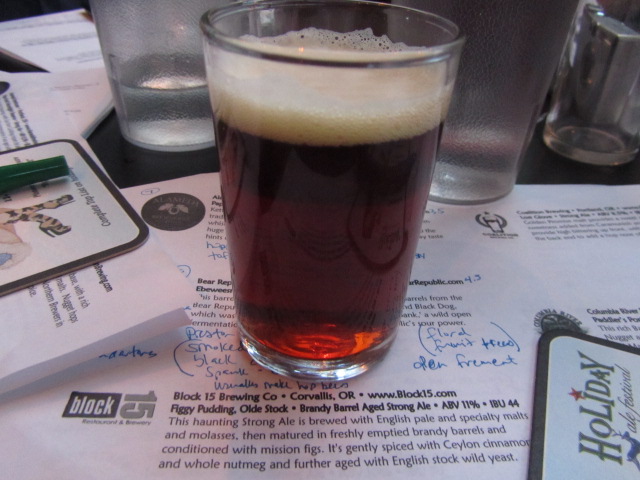 Cascade Sang Noir: If you’ve explored the Cascade Brewing Barrel House in Southeast Portland since they opened this fall, you know that they are leading the way with geek-a-riffic releases that make one-offs seem like year-rounds. This bourbon fruit sour amongst Cascade’s breadth of rouges offers a shining example of what Lactobacillus can do for the red ale. Forthright cherry whiffs through from a snifter (or plastic mug) from this young batch with an unapologetic emphasis on the bourbon-soaked wooden casks. 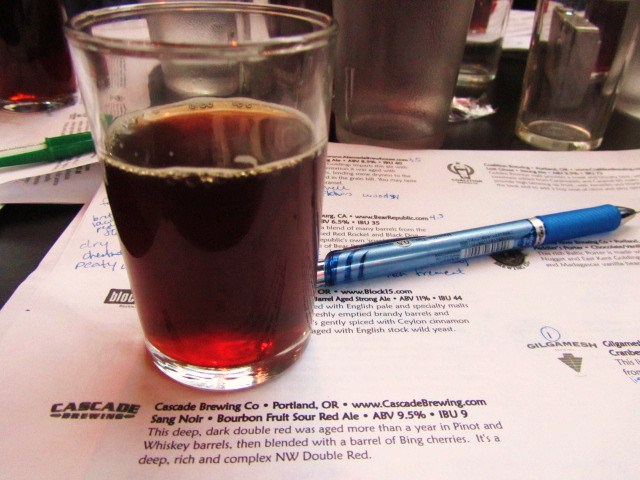 Bear Republic Ebeweesner Scrooge: After we met with Bear Republic Brewmaster Peter Kruger in person and got a deeper sense of his renegade craft beer zealousness, we got to truly understand his reckless abandon for playing by the rules when it comes to boundary pushing brews. This open barrel-fermented ale lends a floralness associated with the flora of Sonoma County, California. Flavor variables resting on the Northern Californian region’s ambiance is a major factor in sculpting this special brew. A blend of smoked Red Rocket ale and Black Dog mild/porter, Ebeweesner is then inoculated with a Brett/Lacto/Pedio combo that ends up a dry and peaty chestnut-hued prototypical brew. 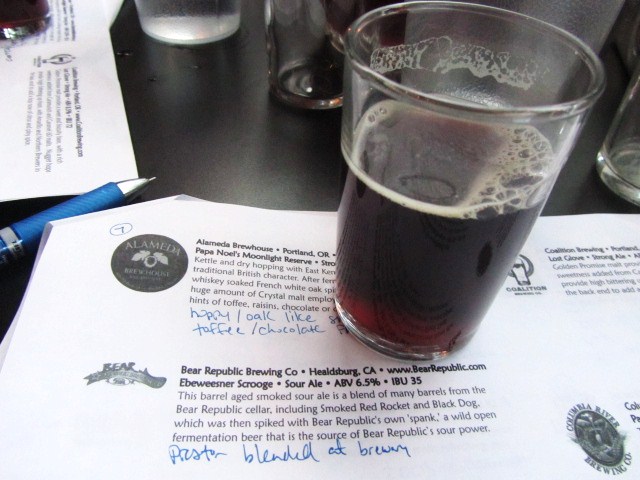 Lompoc Fanc’ly Brewdolph: This Belgian-style red ale aged in Cabernet Franc barrels for 13 months was blended with the 2010 batch to equate to one spectacular brew that lives up to and exceeds all hype. Known for crushing the status quo of what a winter seasonal can be, Lompoc has shown through their vast holiday beer lineup that they have the skills to pay the bills. This is a sure shot! Intergalactic! 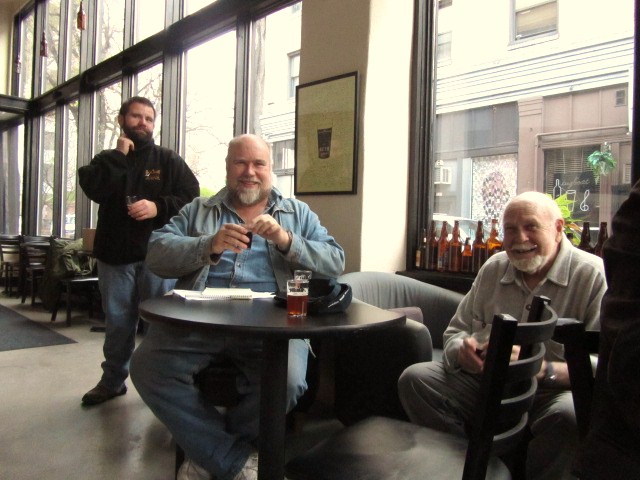 Natian Brewery Old Grogham Winter IPA: Only one IPA at HAF and here she is. Rum-soaked Oregon oak spires were added during the final stages of fermentation to compliment this high alpha 8.5% ABV 86 IBU lupulin bomb. Waves of sweet caramel work with the bitter strawberry jam-like hop beast to give you warmth and creaminess worthy of ringing in the new year. 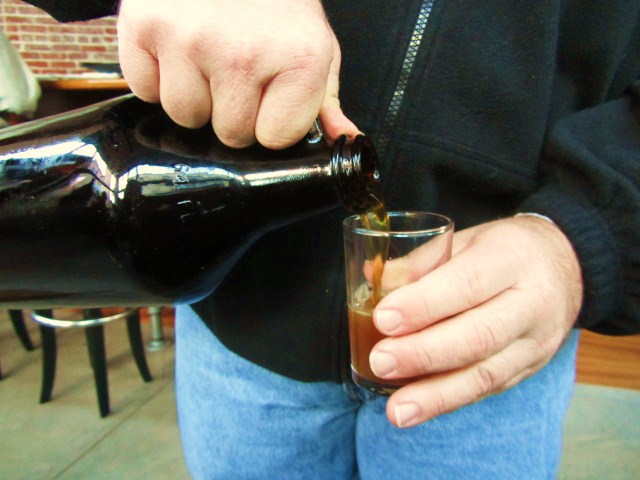 Moore Holiday Ale: An original offering of the HAF, this is a beer designed by organizer Weesner and beer “viking” Ken Johnson of Estacada’s Fearless Brewing back in 2003. A lighter option of the event, this recent rendition of the Moore was put together by Ike Manchester of Widmer at their pilot system at the Rose Quarter. Named for Preston’s granddaddy who got him into good brew, the Moore offers a slight sweetness and a full graininess. A 7.5% ABV Imperial Pilsner-ish brew might not be for everyone, but its for us! 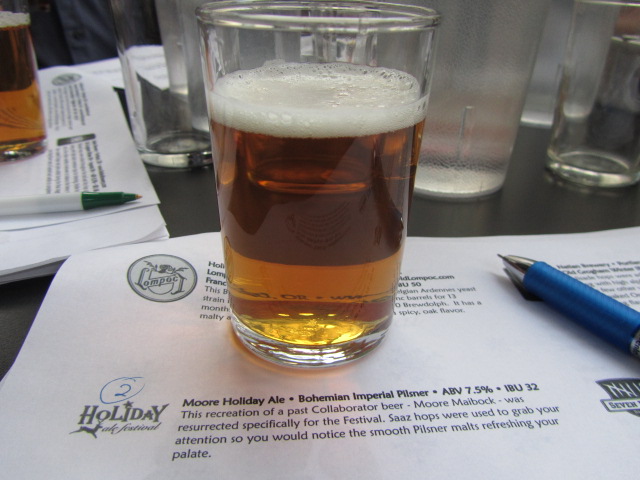 Alameda Papa Noel’s Moonlight Reserve: Alameda head brewer Carson Haney makes great beer. This is another shining example of what Haney and his team of beer geeks are doing right nowadays. With the signature Alameda hoppiness alongside big wood and toffee characteristics. With French white oak spires soaked in whiskey, this malty brew with lots of dark fruit notes is a proper representation of Beervana wintry wondrousness. 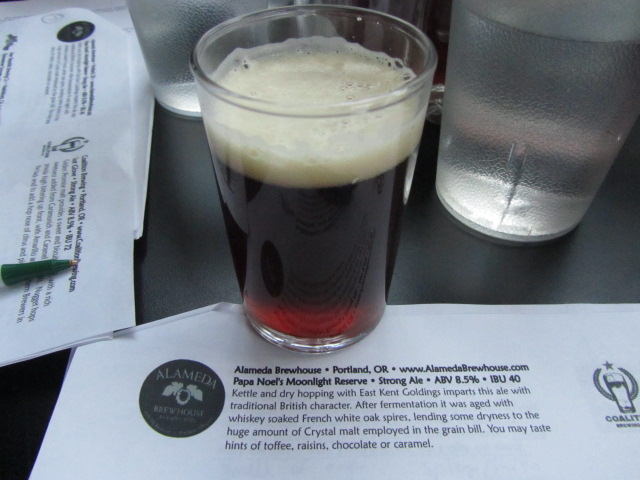 Columbia River Brewing Paddler’s Porter: Here’s a beer we first learned about from the CRB folks on our first tour of the new brewery. A deep chewy seven-malted lager showcases the potential of Madagascar vanilla beans and cacao nibs in conjunction with the already dessertif potential of a gripping 8+% ABV brew. Where’s the chocolate cake? Oh, it’s right here in a glass. 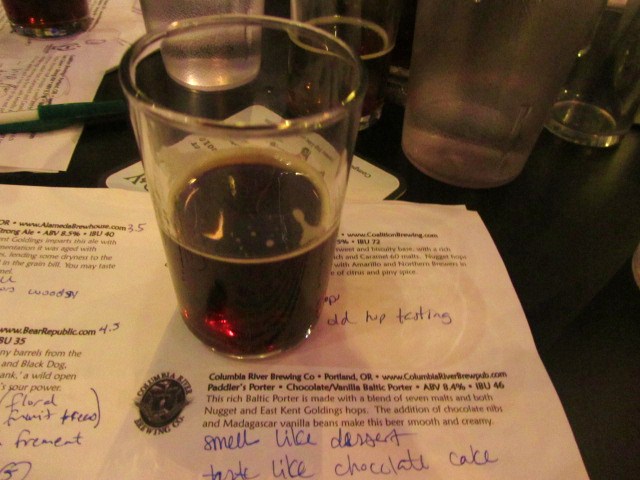 Gilgamesh Cranberry Saison: What part of “Cranberry Saison” doesn’t have you running for the Gilgamesh tap at HAF? An unparalleled bright pink-peach color with a bubbly tight whitish head is the first alluring beckon of this beer. Dry rosé qualities made this vinous ale a slight tart sparkle that has the ability to resuscitate a potentially bruised HAF palate. Kudos the Gilgamesh for their inventive spirit regardless of the event. Try this and discover the Turner, Oregon’s sense of adventurism. 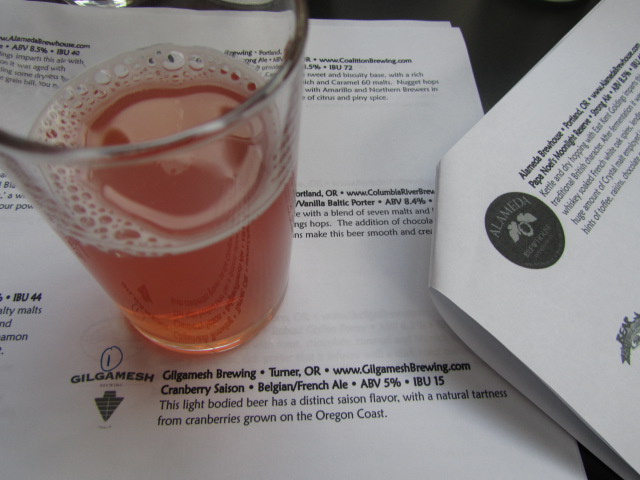 Many thanks to organizers Preston Weesner and Chris Crabb as well as Geoff Phillips of Bailey’s Taproom for hosting the HAF media preview and proving to be a continual supporter in the effort to perpetuate good brew.