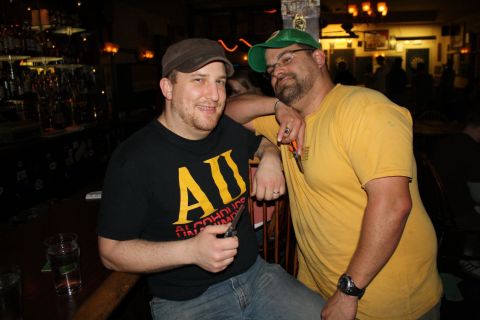 Happy Tuesday. Brews day. Oregon Craft Beer Month day #13. We’ve put together a list of a few things that you might want to consider checking out.

Hopworks What the Helles? Release – You may remember we mentioned this just yesterday, but, hey, here’s you last reminder…HUB unleashes a keg of summery goodness at Apex Bar with this organic session brew made in the Bavarian tradition. 4% ABV and brewed with Saaz and Hallertau hops. This brew as well as the monstrously hopped Evelyn’s Imperial Sunshine IIPA will be pouring from HUB’s bike bar. Brewers will be on hand as well.

Beer Trivia at Hop & Vine – Got a penchant for beer geekdom? Think you know more than your craft brew lovin’ pals? Test your wits at The Hop & Vine tonight with host Abram Goldman-Armstrong. He probably knows more than you do, but luckily, he’s the host so you don’t have to worry about competing against him. Starts at 7:30PM.

Two Dollar Tuesday at The EastBurn – Since it’s Tuesday, we might as well mention that it means pint night at The East Burn. Outrageous deals on sixteen craft beers on tap. This isn’t just an Oregon Craft Beer Month thing, it’s every Tuesday, but, hey, it’s a hell of a bargain. We like to arrive early so as not to have to fight the crowds. Still, a deal is a deal. And, it’s even better with a great beer selection.