We just caught wind that  two new breweries have started brewing here in Beervana.  And just when you thought Oregon was at the top of its game.  Dog Mountain Brewing of Portland began brewing an original hemp-infused IPA as its flagship. 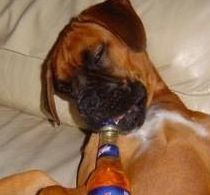 In attempts to finally make a dog friendly beer in the area, Dog Mountain will also produce a meat-based non-alcoholic brew for dogs. “Its about time some one in this area started taking notice of our furry friends” said owner and brewer Bob Cannon. “People in Oregon really need to accomodate dogs more.” Cannon, a native Oregonian is the cousin of Rep.  Ben Cannon, and also a proponent of his cousin’s proposed beer tax hike. “I think the tax is great” said cousin Bob. “Our dog beer will be the first to be taxed whether the bill passes or not. I propose that the tax goes toward funding dog training classes for obedience.” Bob, a graduate of Alabama school of Fermentation Sciences in Little Rock spent years formulating his recipes illegally in the shadows of strict anti-brewing laws in the deep south. “I am happy to now live in Beervana where beer runs freely and just beer taxes can support folks like my cousin and my dogs” he said. Wow!  Well, good luck, Dog Mountain.  As a side note, it should be pointed out that due to the difference in dog years, pups must reach the age of 3 (human years) to consume the doggie brew.

Also making a public announcement yesterday, a new Bend brewery will soon be open as well.  Fish River Brewing will soon be churning out an assortment of all organic beers from a unique water-powered brewery. Claiming to be “the first ever sustainable brewery”, owner Stone Birgutt is happy to finally get his dream off the ground.  “We are doing some crazy things that other breweries haven’t even realized were possible” said Birgutt in a recent interview. “Our brewery is for extreme bicyclists, not just your every day peddler. We realize that the impact of cars is killing people every day and we are doing our best to change this.”

The downtown brewpub/food co-op has no parking lot and Birgutt joked “We reserve the right to refuse service to anyone burning fossil fuels.”  Birgutt continued “We are taking it to a whole different level. We are are using old bikes not only as ornamental design, but we are are retooling the frames to use as paddles to stir the brew kettles and the converting the peddles and gears to pump grain from our silo.”  Fish River’s practices, to some, may seem a little extreme, but Birgutt himself, is one extreme guy.  An avid white water rafter, the brewer also spent a year training for Tour de France.  In the process, he picked up a few Biere de Garde recipes that he hopes to employ soon at Fish River. “50 percent of the state sales tax we make will go directly to restoring salmon in the Columbia River” claims Birgutt.  In addition to the water-powered facility, the pub will also feature a solar powered cash register.