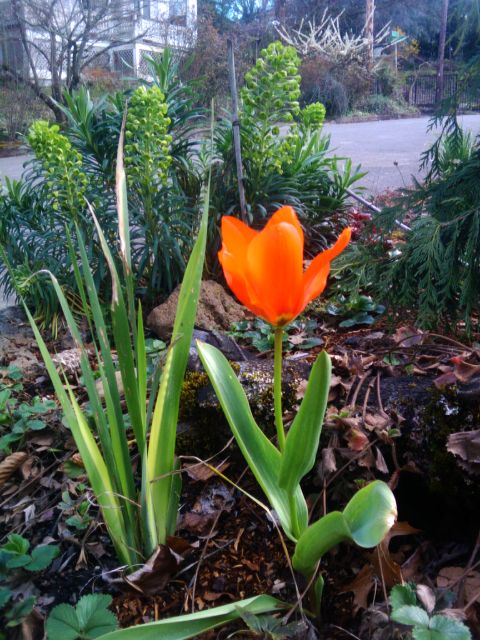 Spring is finally here and not soon enough. March 2011 was the coldest on record in Oregon history with average temperatures 7 degrees Fahrenheit below normal. How could this be? Still, if it’s true what is said about April showers bringing May flowers, we can count on a lot of beautiful colors in the weeks to come. This weekend past was the first in a while that genuinely felt like spring had at last sprung. A lone tulip peered up in the yard, and all is green in good. Spring beers are making their presence known with CDAs moving aside for ambers and a slew of other new releases popping up like said flowers. 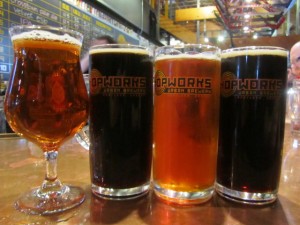 As is typical for us here at Brewpublic, the weekend lasted throughout most of the week. This was initiated by Hopworks Urban Brewery’s 3rd Anniversary party on Wednesday March 30. For the entire day, HUB offered $2 brews as a thank you to their loyal customers. We enjoyed Terry Porter, Ace of Spades Imperial IPA, HUB Lager, and several rounds of their latest session ale, a light refreshing 4.2% ABV brew with a nice aromatic dose of hops. Assistant Brewmaster Ben Love shared some samples of Bourbon Kronan Baltic Porter with us that was simply delicious. Also as a special treat for folks at HUB, the staff brought out a handmade chocolate cake to pair perfectly with some Seven Grain Survival Stout. 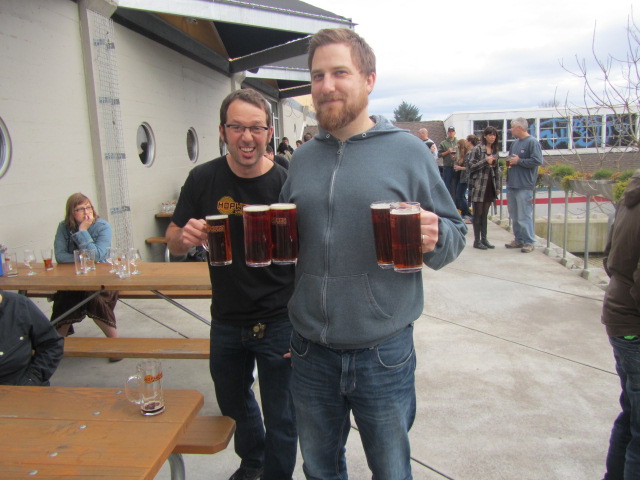 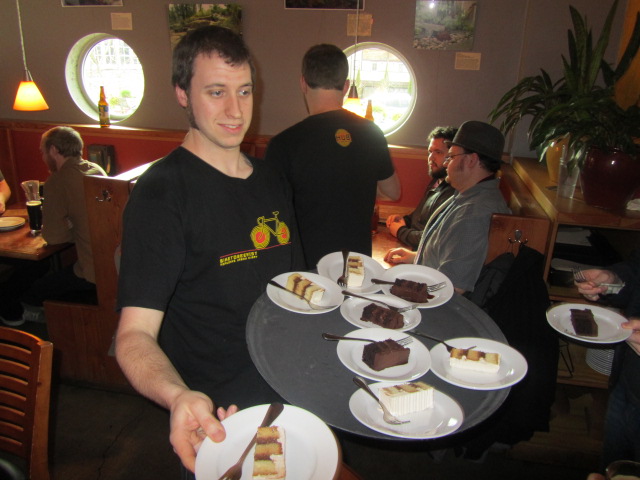 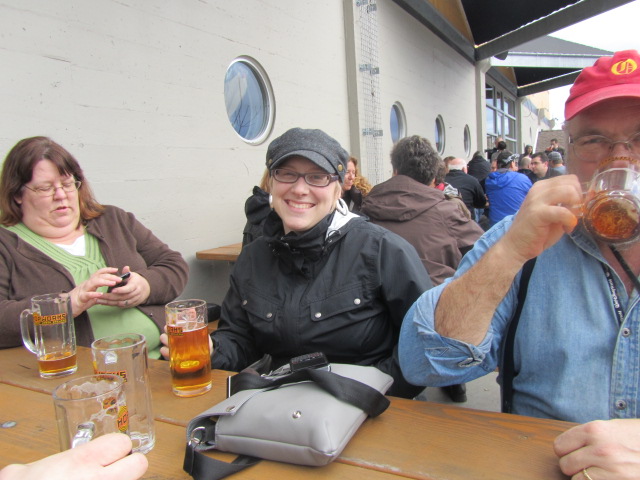 On Thursday, we made our way down to Rock Bottom Brewery in downtown Portland for the unveiling of their latest release – a spring Dunkelweizen. Also known as “Slam Dunkel,” this murky, unfiltered, malt-forward wheaten ale was free to those in attendance to those in the bar at 5:30PM, when Rock Bottom Brewmaster Charlie Hutchins addressed the crowd and raised a pint to spring finally arriving. 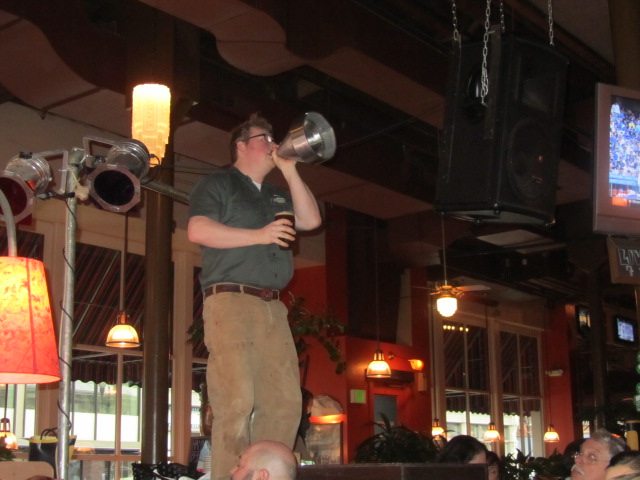 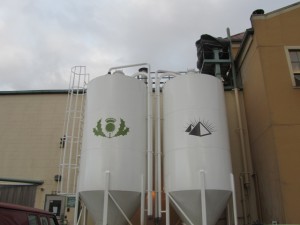 After Rock Bottom, a group of us traveled to the depths of Portland’s Northwest Industrial District to hit up $2 pints at MacTarnahan’s Taproom. Here we bumped into some of the brew crew including Brewmaster Thomas Bleigh, head brewer Vasilios Gletsos, and brewer Ryan Pappe. Just releases was MacTarnahan’s Spine Tingler Belgian-style Triple Ale, a bold, spicy, and effervescent golden-hued beer that was surprisingly smooth considering it weighed in at 8.5% ABV. Also on draught only, we enjoyed a new dry-hopped lager that the brewers have been tooling with. Around 6% ABV and aggressively spiced, this taproom exclusive will be coming out in full force soon. Gletsos informed us that he’s been recalibrating some recipes at Pyramid’s Seattle brewery that has been out of commission for a few years. We’re excited to see what comes of this revamped undertaking. 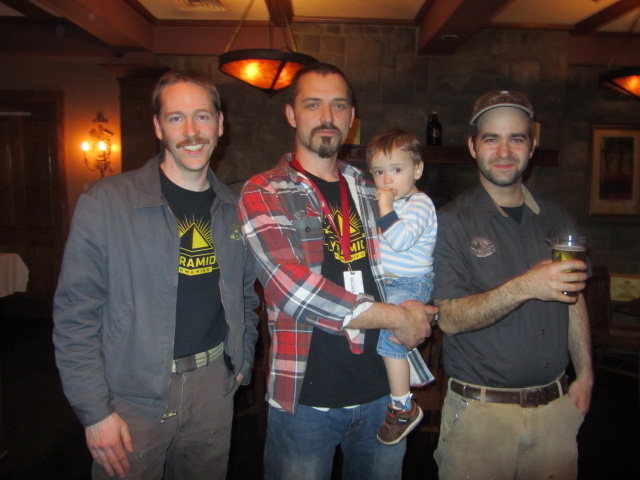 Lastly on Thursday evening, we landed at Deschutes’ Pearl District brewpub in Portland. Here, an assortment of new brews were flowing, including an interesting hoppy wheat ale known as the”31-25,” named after the final score of the latest Superbowl won by the Packers. Apparently someone in the brewhouse is a big Cheesehead. Also on tap was the Bitter Orange, Inverted Pale, I.N.L.Y. Lager, and Ursus Strong Ale, among other favorites. 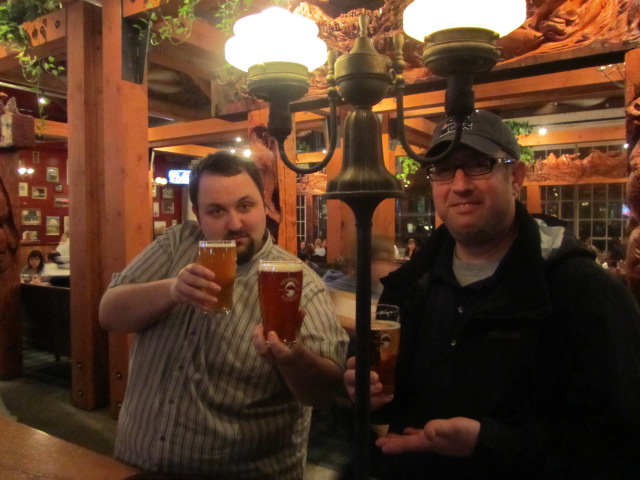 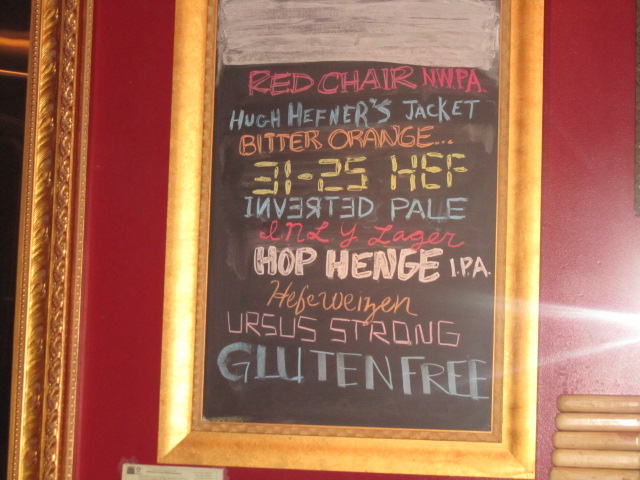 Friday was April Fools Day, and we enjoyed the many pranks and shenanigans going on around the world, especially here in Beervana. According to the fellows at The BeerMongers more than ten people were fooled by a Facebook post that claimed they had a keg of bourbon barrel-aged Pabst Blue Ribbon. In fact, it is said that one couple was so upset when they arrived and found out it was an April Fools hoax, they stormed out stating “we’re going to Belmont Station!” We hope they didn’t fall for Belmont’s prank a few years ago stating that a case of West Vleteren 12 had arrived… C’mon people, April Fools Day has been around over 500 years…lighten up! 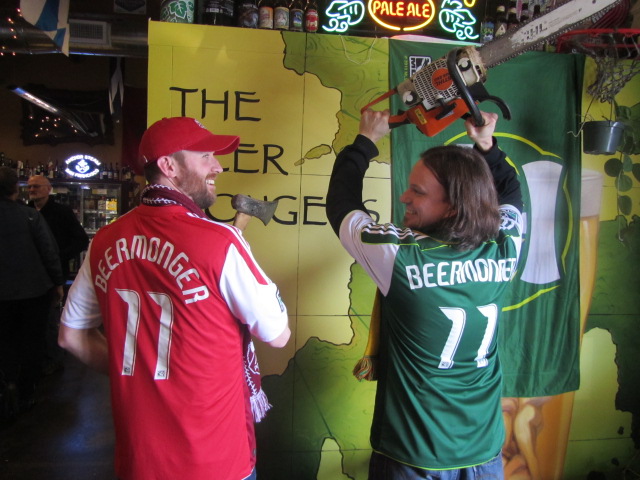 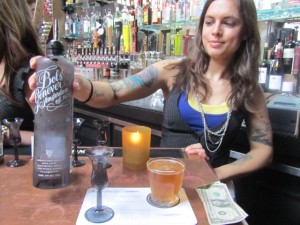 We found ourselves at an interesting pairing event at Circa 33, a newer bar housed in the space where It’s A Beautiful Pizza used to be on SE Belmont Street (also next to it is Hall of Records). At Circa 33, Upright Brewing was releasing a new beer made in conjunction with Bols Genever Amsterdam gin. The gin, made for a variety of botanicals including hops was served from the bar top where patrons were to bend forward and slurp from the full stemmed shot pour before chasing with the new Upright brew. The brew, known as Kopstootje, meaning “Little Head-butt” in Dutch, was a hazy pale biere de garde made with a variety of botanicals itself, including anise seed, ginger, angelica root, licorice, and juniper berries. Mixologist Jacob Grier and Bols Genever representative Tal Nadari were in attendance as well to describe the conception of this unique marriage of flavors. 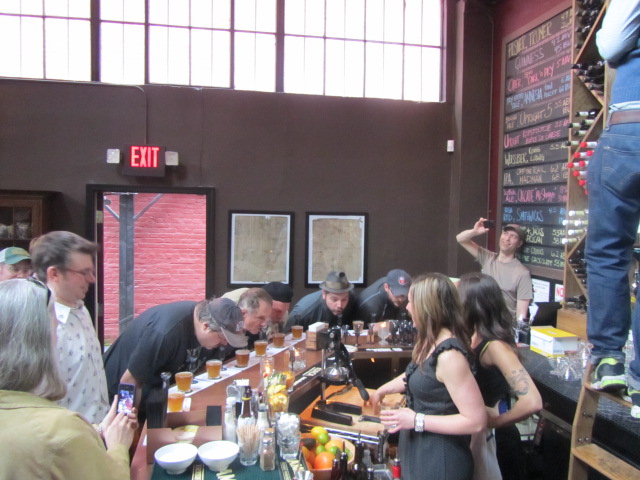 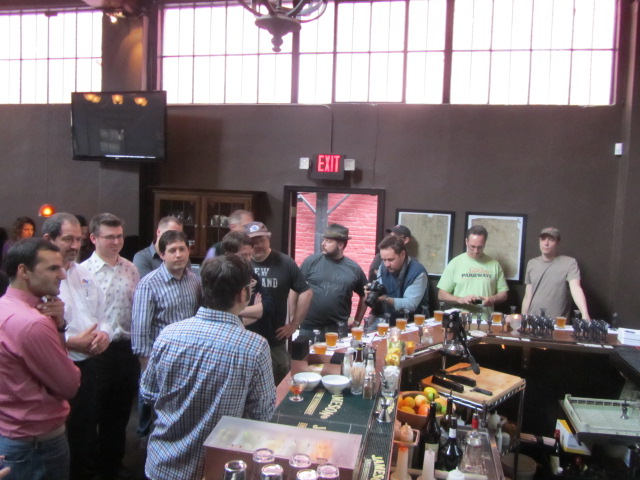 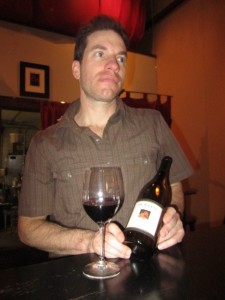 Friday evening we wound up at, of all places, a wine bar. Press Club, on SE Clinton Street and 27th Avenue is run by our old friend Kevin Friedman and his partner Peter Strolis. A cozy and warm atmosphere, the Press Club offers a great variety of wines and spirits as well as bottled beer. Recently the establishment added two beers on tap. During our visit we enjoyed Ninkasi Total Domination IPA and Double Mountain IRA. Press Club features regular musical performers, artists, and film showings. On Friday, Brewpublic’s Aaron Miles (aka DJ Miracle Miles) was spinning some of his favorite jams. 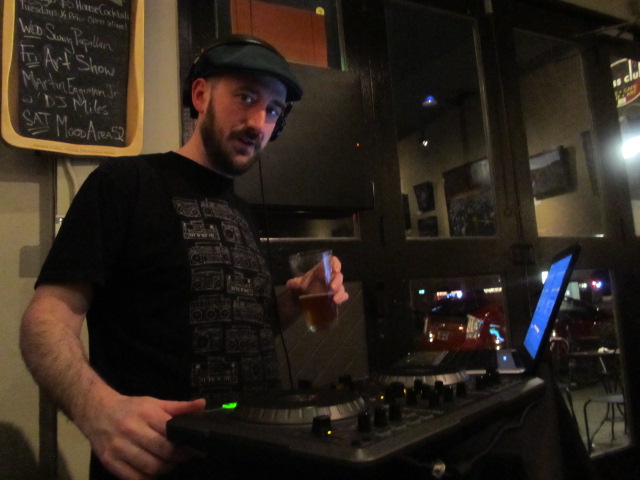 On Saturday evening we celebrated the release of Fort George Brewery’s beer in cans. Their 1811 Pre-Prohibition Lager and Vortex IPA were featured in cans, as were draught pours of Bourbon barrel-aged Cavatica Stout and XVI Chapel Imperial IPA. Fort George co-founder Chris Nemlowill and his lovely wife Zetty McKay were in attendance raffling off swag and meeting with the healthy crowd of folks congregating in Sarah’s Side-space. As an extra special treat, Saraveza’s Lori Adams Clinton aka “Sugar Pimp” made an amazing cake depicting a large can of Vortex IPA. Clinton told us that it took here six hours to make the cake which featured multiple levels of chocolaty goodness and pairing greatly with the Bourbon Cavatica. 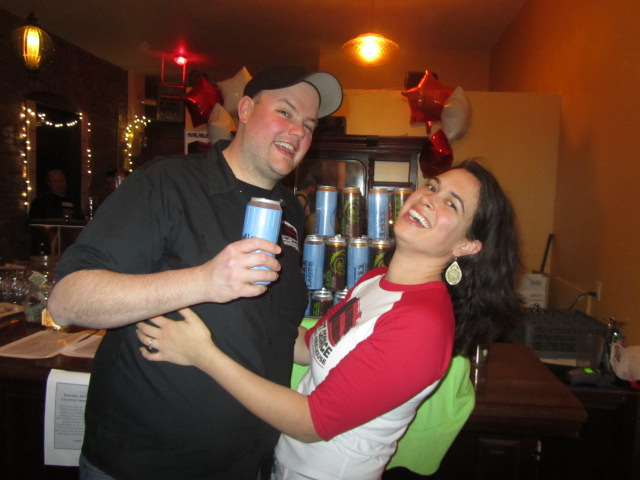 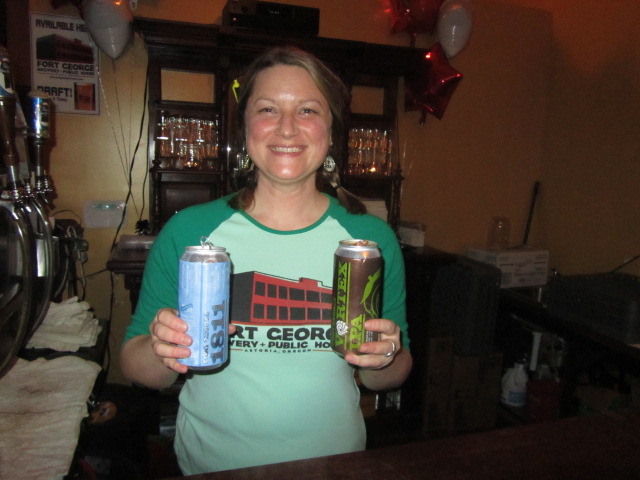 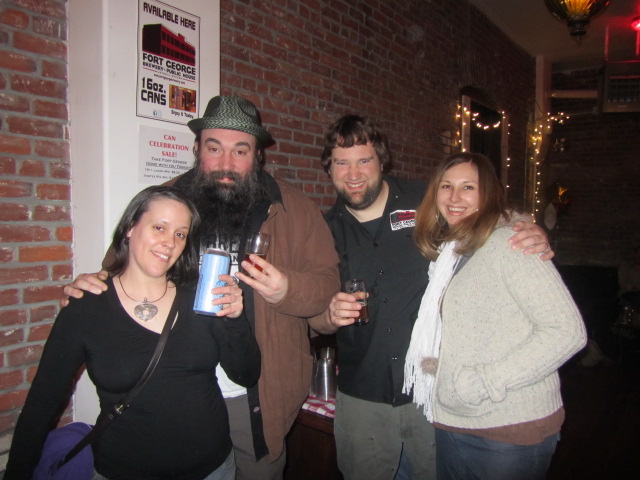 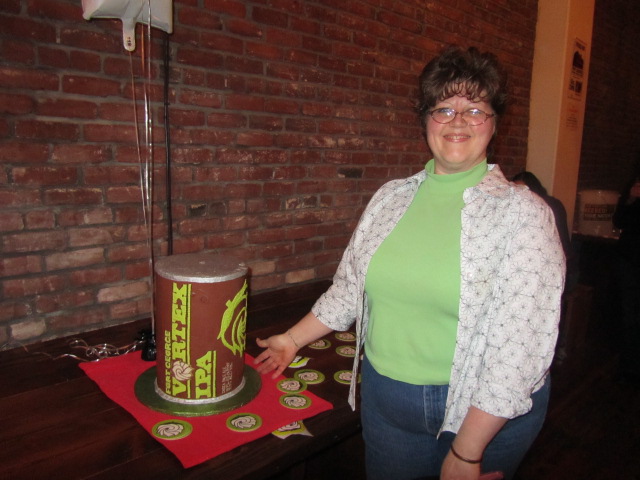 Sunday was a rather mellow day during our weekend. When the rain ceased, we spent a fair amount of time weeding and dead-heading in the yard to prepare for the growing season. We procured our hops rhizomes, noticing some sprouts that should soon be climbing high to the heavens. We even picked a few young hops shoots and steamed them with a little olive oil and herbs. 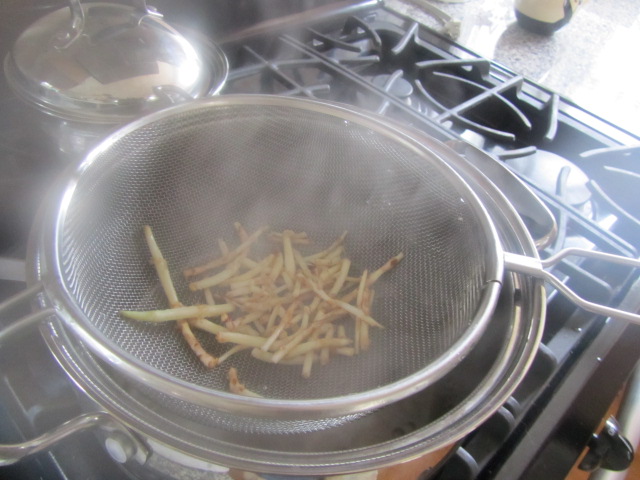 Sunday evening we wound down with some beer and wine at Bar Avignon. Avignon is a terrific little neighborhood pub that was recently featured on our 2nd Annual Meet the Brewers BrewPubliCrawl. Pouring on tap was Upright Four, Fort George Vortex IPA, North Coast Old Rasputin Imperial Stout, and Full Sail LTD 05 Lager. Upright and a glass of Mornac was a nice means of closing out the weekend…Well, we actually stopped by The BeerMongers on our way home to snag a few more brews to drink at home, but who’s counting… Cheers! 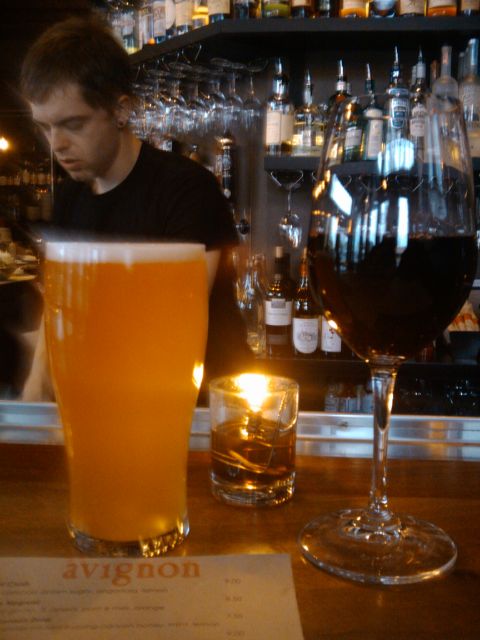