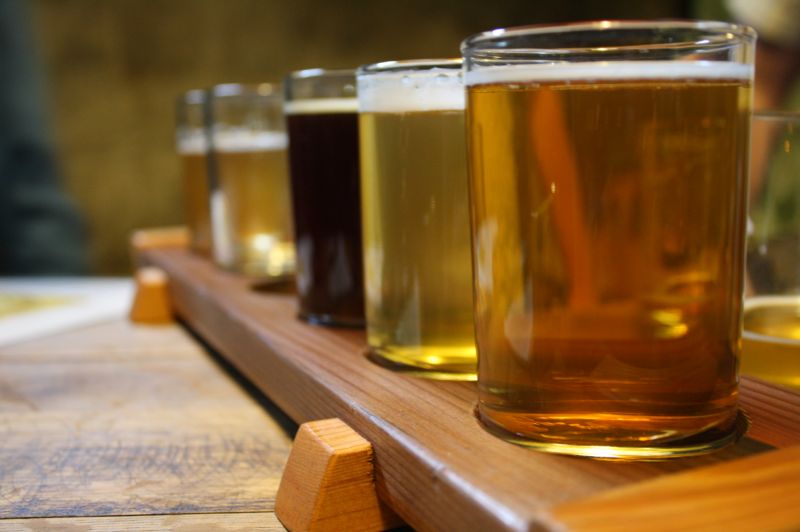 The weekend came and went with such celerity that, when chewing the cud, it appears to have moved with the fervor of one devoid of last minute tax filing work. An old adage asserts that there are only two certainties in this world: death and taxes. Well, death happens only but once and sees to an end of its own condition for he who is of its grasp. Elseways, taxes are an annual quibble that returns to haunt us just as we’ve survived the throes of winter.

As mentioned, the past weekend wasn’t without a bit of stress, but once the final tax hurdles were cleared, all seems good in the world…that is until next April (however, if apocalyptic prophecies are fulfilled early enough in 2012, we may be spared of one of these certainties). So, yeah, the weekend… 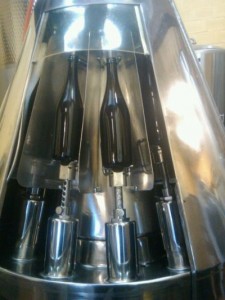 Thursday and Friday we put in some hours over at Cascade Brewing’s Barrel House in Southeast Portland assisting in the bottling of two forthcoming sour delights. First, on Thursday, we put some palates of 2010’s Apricot Ale into tidy corked and caged 750 ml’s. Then, on Friday, we did the same with a bit of Cascade’s Sang Royal. When the Royal is ready for release, it will be a spectacle to behold. A beautifully rounded fruitful Lactobacyllic ale blended from a variety different wine barrel-aged bases, sharp cherry notes promise to meld revealing authentic and complexly labrynthine results. We’ve yet to try it, but if it’s anything like its last release two years prior (one in which users on Ratebeer crown the beer an overall perfect 100 score) , it will certainly wow.

Following Friday’s work, we retreated to the bar side of the Barrel House to partake in some quaffs. At 5PM, for the first time ever, all three Cascade “Sang” brews were on tap simultaneously. Sang, Royal, Sang Rouge, and Sang Noir. Still, nothing might be as refreshing as a simple Portland Ale sipped from a bulbous Victorian pint glass. 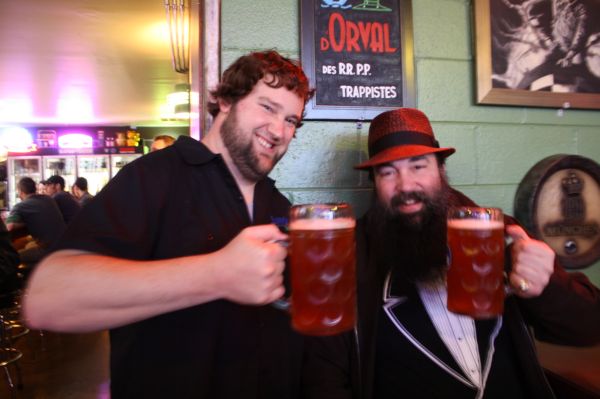 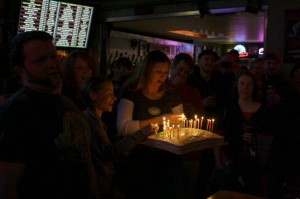 Following an action packed day at the Barrel House, we cleaned up and headed over to APEX, one of our absolute favorite Southeast Portland haunts for a special birthday party. Not just one person’s birthday, but two. And, not just two, but two brothers. And, not just two bros, but the Ensign boys, Chris and Tim. Both are well-known and beloved local Beervanian beer dudes. Chris, aka “King C” tends pub at both APEX and the Horse Brass, and served time at Lucky Lab, Rose & Raindrop, and at the pre-Rogue Green Dragon. Tim aka “Tiny”, has also worked a multitude of craft beer promotion jobs including Mountain Peoples Organic Beer & Wine Distribution and rep for Fort George Brewing. His latest endeavor, Powered By Yeast looks to provide him with a more independent and creative outlet for his brokerage skills. 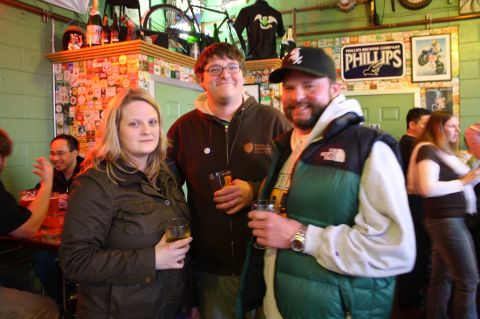 For King C and Tiny’s birthday, all profits from a keg of Fort George Vortex were donated by APEX to Japan Tsunami Relief charities. So, as expected, we settled up to a big malty, dankly hopped 7.7% ABV pint of Astorian goodness. One particular beer of note at APEX on this night was Bayreuther Aktien Original Helles Lager. Making its Oregon debut, this light crisp Dortmunder/Helles beer was a nice contrast to the estery and chewy attributes of Vortex (at last check, this beer is still on tap so get it while the gettin’s good). 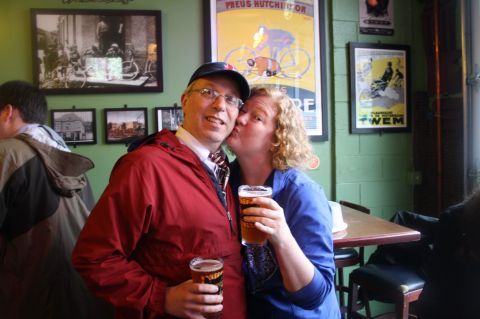 A cake with lit candles was brought out and the Brothers Ensign made a wish and blew ’em out (we suspect they were wishing for more good beer, which shouldn’t be too hard of an order for them to fill). Many friends and prominent figures from the Portland, Oregon craft community were on hand to wish the lofty lads many returns. 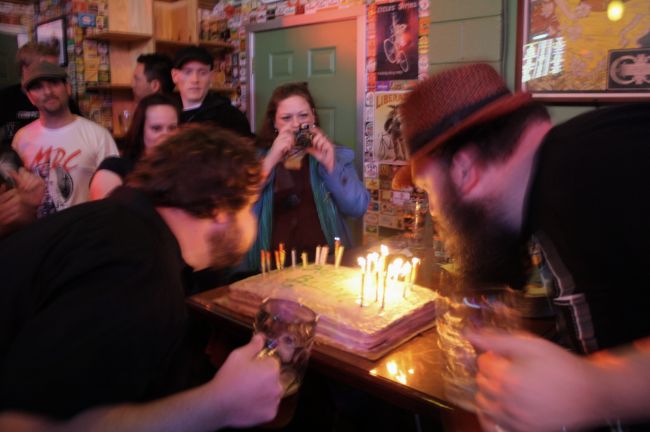 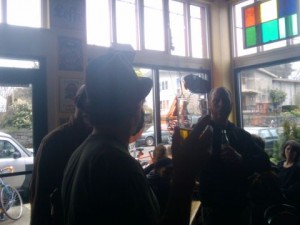 On Saturday, after aforementioned pain in ass tax filing was finally completed, we made our way over to Belmont Station to raise a glass to a friend of ours and that of the craft beer cause. Richard “Rich” Bobkin was memorialized by those who shared pints with him at his favorite beer stomping grounds. Rich passed away on April 9th  while hiking in the Gifford Pinchot Forest. In a statement appearing on their website, Belmont Station said “If you’ve spent any time here you almost certainly know Rich. To all of us Rich became not only a friend but a part of the very fabric of Belmont Station.” Belmont Station owner Carl Singmaster toasted Rich at 5:03PM  in front of a full Bier Cafe while a slideshow of pictures of Rich was presented on a television atop the bar. Many folks partook in German boots filled with Pilsner, a favorite of Rich. Also, as a tribute, Belmont offered free glass bottled Mexican cokes, a favorite of Rich. Rest easy, brother! 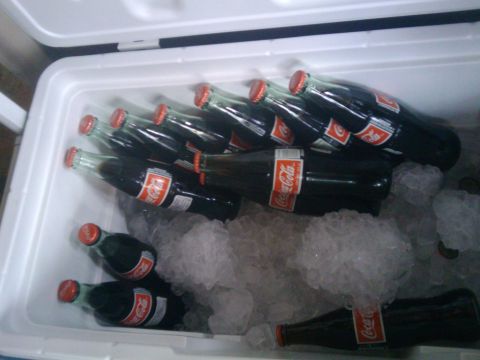 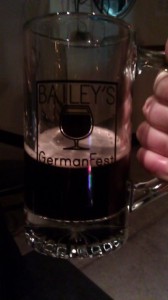 ater in the afternoon on Saturday, we wound up at Bailey’s Taproom for their first annual GermanFest, an interesting event showcasing all Oregon-produced beers brewed in the style of Germany. Two Berlinerweiss brews were on tap including a tradition rendition from Block 15 and a barrel fermented more soured and funkedified Flat Tail Corvaller Weiss. Four different sweetener syrups were made available for these lower ABV tart brews, including two house made syrups from Flat Tail. Two Alt beers flowed from Bailey’s nozzles including Widmer’s original and one from Laurelwood. Other highlights of the festival included Silver MoonBridge Creek Pilsner (a bronze medal winner at the 2010 Great American Beer Festival), Heater Allen Hugo Bock, Columbia River Hollywood Hefe, Block 15 (under the moniker “Brewed By Beavers”) Up in Smoke Rauchbier, Breakside Kellerbier, Lompoc Roggen Roll Roggenbier, Hopworks What The Helles? Helles Bock, Vertigo Zen Dunkelweizen, and Oakshire Black Wolf (probably our favorite beer of the day).

On Sunday afternoon we landed at The BeerMongers where the Ladies of Lagers and Ales, or “LOLA,” were holding a potluck. A specially ordered keg of Fort George Coffee Girl Imperial Stout was on special for the member of the group (just $2 a glass). After a $5 imperial pint of this 9.5% ABV breakfast ale, we were prepared for a mid-day siesta, but not before a quick $3 pint of Sierra Nevada Pale ale at Blitz Ladd while catching a little Timbers action (Portland’s soccer club is now 2-0 at home). 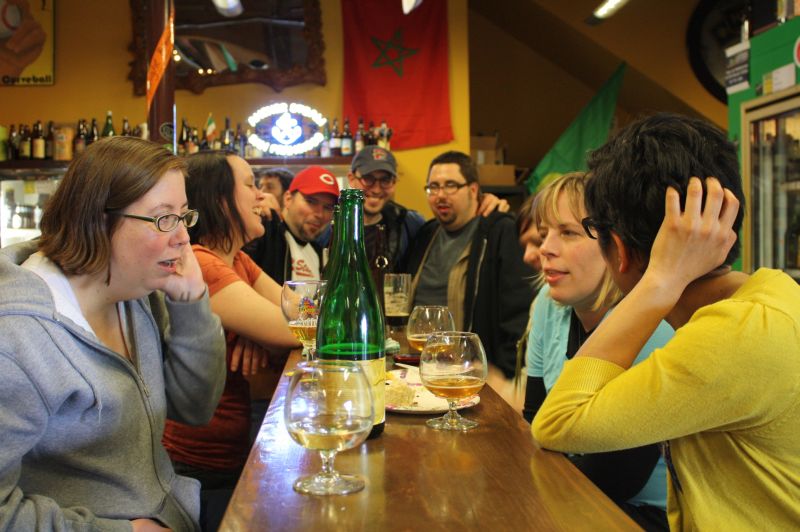 In the later afternoon, we swooped into Upright Brewing‘s tasting room to garner some samples of their fine brew and to pick up a keg of Engelberg Pils that we had filled. While at Upright, beertender and label artist Ezra Johnson-Greenough shared tasters for Fatali Four, a unique pepper sour ale bottled earlier last year. 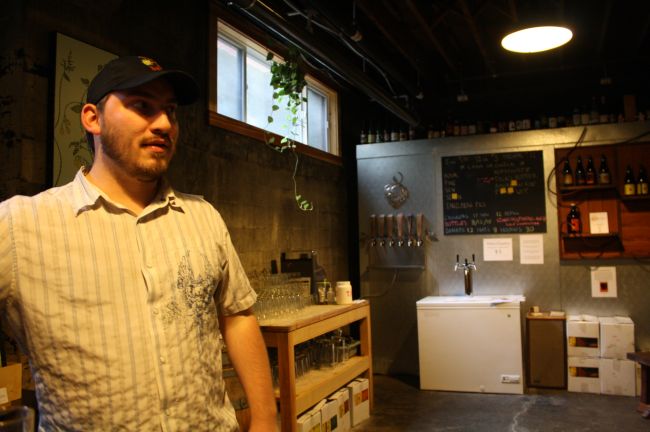 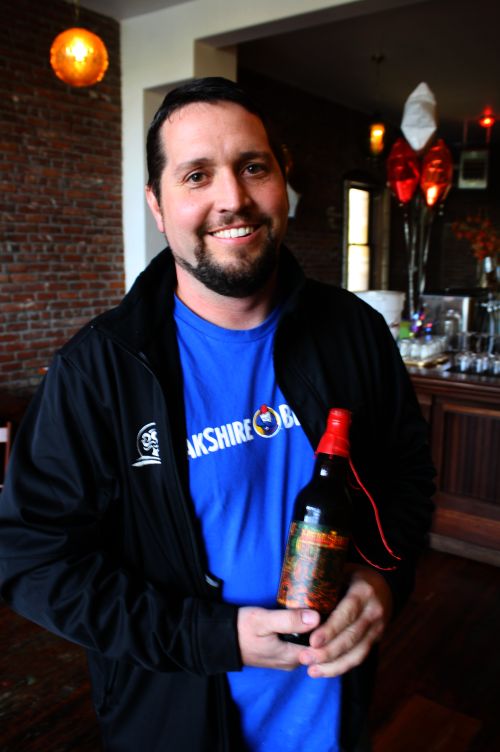 Early in the evening on Sunday, we popped into Saraveza‘s Sidespace for a media press conference held by Oakshire‘s Matt Van Wyk. Here, the Eugene Brewmaster unveiled a new series known as Hellshire. Van Wyk greeted about a dozen bloggers and writers, familiarizing them with the brewhouse’s latest one-off undertaking. Hellshire will showcase beers from Oakshire’s barrel-aging program housed across the street from their brewing facility. The first release, Hellshire I, is an American Barleywine aged 100% in bourbon casks. Waxed dipped bottle pours were shared with attendees. It is hard to find words to describe how delicious and complex this barleywine is. Beginning on May 7 at 8AM, a limited 120 cases of Hellshire I will be sold during the Saturday of Eugene Beer Week. No kegs are in existence according to the brewer. When we asked him how Hellshire I compares to Wooden Hell, a white whale specialty (and 2006 GABF bronze medal winner) from Van Wyk’s former brewhouse Flossmoor Station in Illinois, he pointed to some similarities. He noted a prominent difference being the yeast (now White Labs Cali Ale yeast 001 versus Wyeast London Ale yeast 1318), giving Hellshire a drier rather than sweeter character as opposed to Wooden Hell. Also, Van Wyk pointed to the variability of barrels. 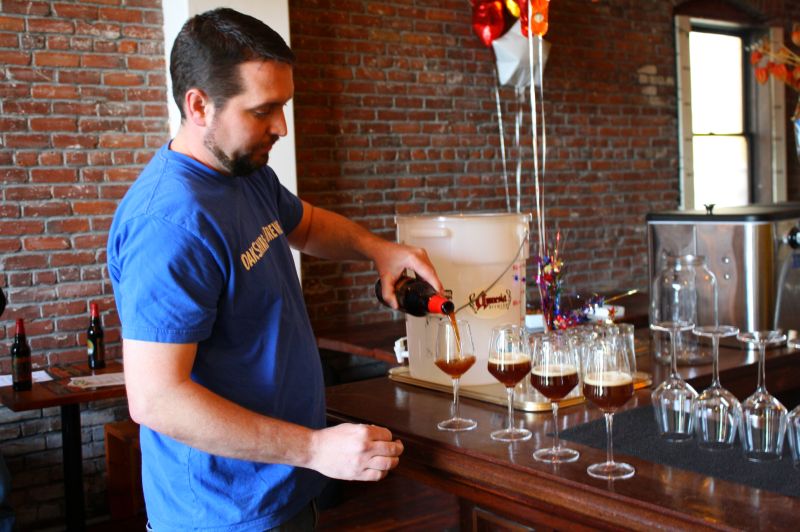 Hellshire I will be Oakshire’s first bottle conditioned beer and is filled with the brewery’s own 4-head maheen. Future releases from Oakshire’s barrel-aging project could include a Drie Fonteinen/lactic fermented beer coming in the not too distant future and an imperial rendition of their award winning Overcast Espresso Stout, but as the brewer points out, there is a lot of variables to consider in order to release a successful barrel-aged product. Look for more information to come on Hellshire in the near future, but in the meantime, make sure you get down to Eugene Beer Week to get your mitts on this grubbin’ goody. 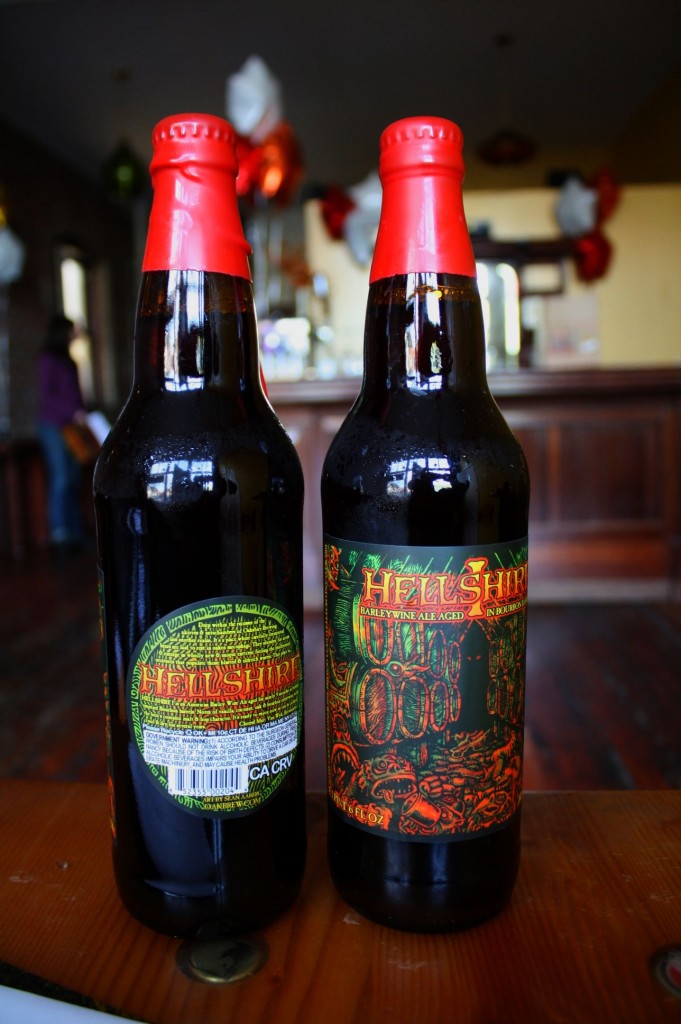 Our last beer destination of the weekend was at Amnesia Brewing. Here, we refreshed our palates with a nice pint of Trailhazer Dry-hopped Pale Ale. Just in time for a Portland basketball playoff run, the ‘Hazer is a perfect session beer for any season. Now on to the work week… 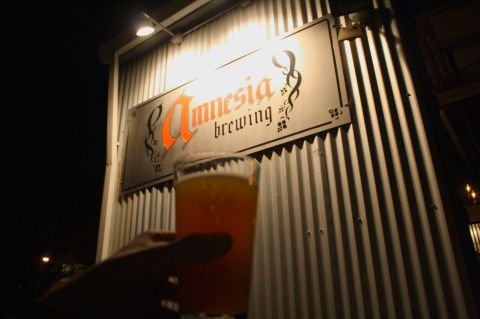