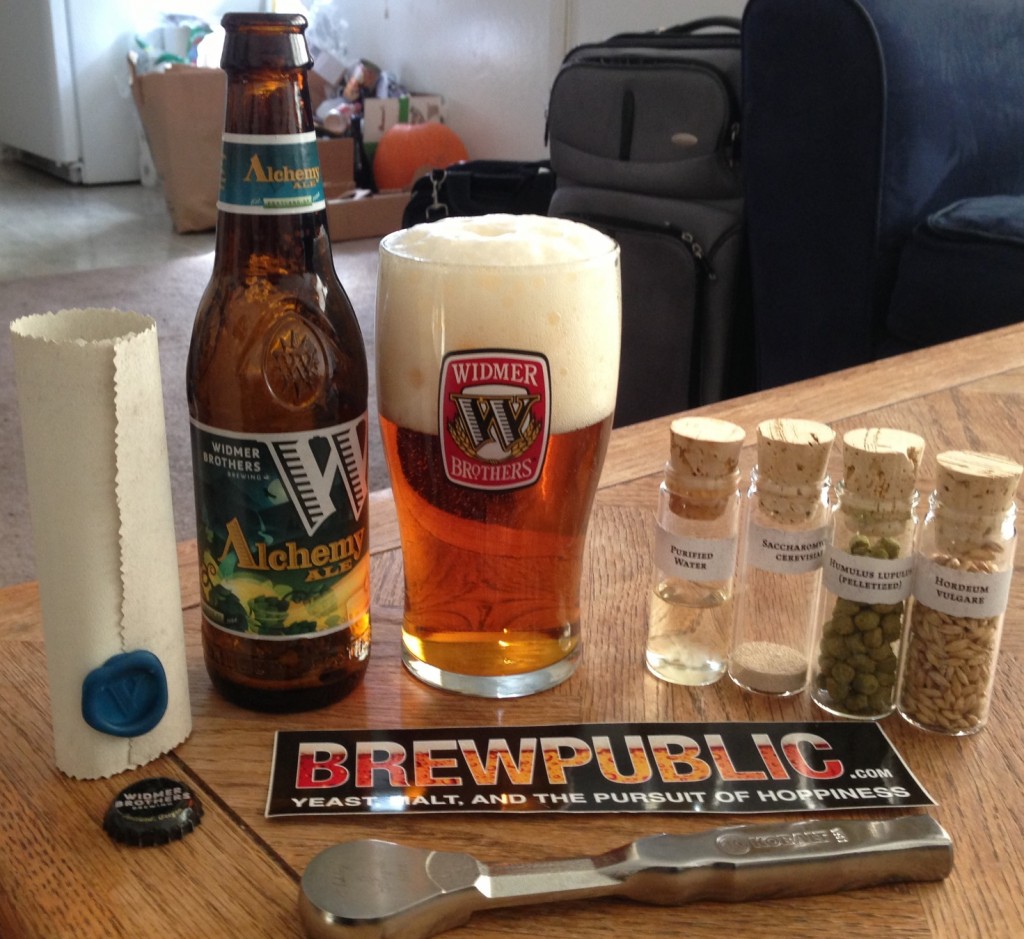 Like Jesus turning water into wine, the Widmer Brothers humbly performs a miracle of their own…okay, so that’s a stretch, but it has that sort of context upon a first read after getting into the wax-sealed manifest of the latest Alchemy Ale from the Portland, Oregon brewery.

It is no lie that the latest release from Widmer showcasing their patented house hop blend is a thoroughly enjoyable amalgamation of simple ingredients. In standard Craft Brewers Alliance fashion, we were graced with a beautiful orchestrated press kit replete with not just a fresh bottle sample of the beer itself in fancy packaging, but a not quite gimmicky array of separated ingredients: purified water, Saccharomyces Cerevisiae (beer yeast), pelletized Humulus Lupulus (hops), and Hodeum Vulgare (malt). This is not only important for non-brewing novices to understand the basic ingredients of Reinheitsgebot-appropo flavor components that go into making beer, but for the geek, it’s a terrific means to get a feel for the specific parts of this sessionable wonder. 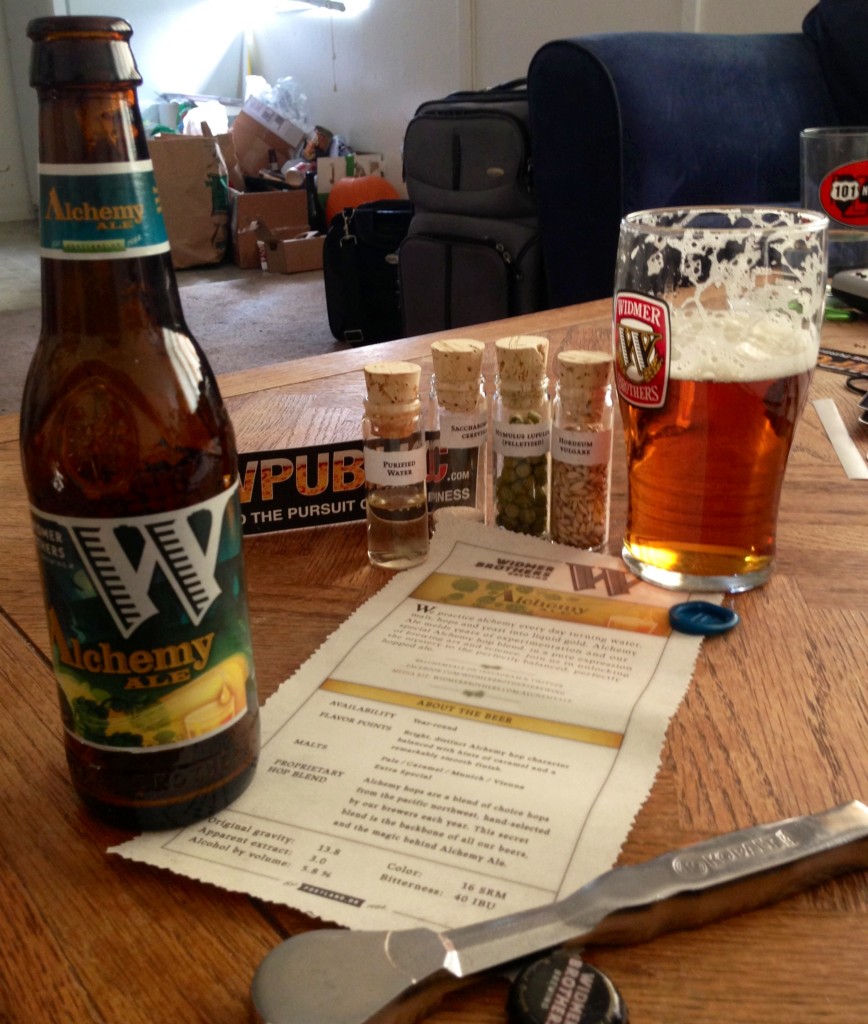 Alchemy Ale is Widmer’s latest year-round addition. And here, in a very fresh format. Widmer’s packaging is stunning. Lots of Portland colors: green, gold (the Timbers Football Club Army is sure to accept this at first glance). The beer pours a burnished copper-golden hue with just the right amount of carbonation and a fluffy, pillowy, and cascading whitish head. The nose of flowery Northwest hops is the first indication to the Cascadian ale lover that this is a proper brew. Soft and crisp grains meld with the citrus, piny, and unobtrusively catty piquancy of the pellets. Not sure we’d call this magic like the branding indicates, but it certainly is artisan craftsmanship with beer at its peak, especially considering the magnanimous and somewhat corporate nature of the company pushing it. It’s apparent the folks who designed and executed this beer were inspired and focused, not losing site of their vision for a perfectly balanced craft offering. The yeastiness of the tipple lends a fruity, wet mouthfeel that is less astringent than more heavily front-hopped ales. We are pleased! Now we just need to knock back a 6’er or a 12’er of this stuff to make sure we’re right about it! 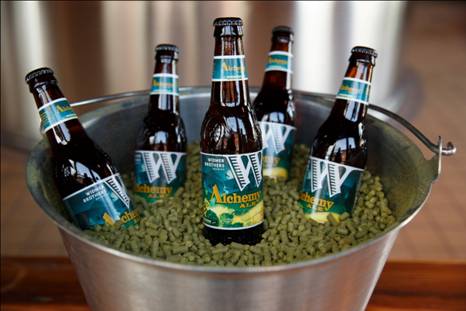 Alchemy hops are a blend of choice hops from the Pacific Northwest, hand-selected by Widmer Brothers brewers each year. After the annual selection of hops, they are blended during the pelletization process which creates a unique, blended pelletized hop exclusively for Widmer Brothers Brewing. This secret blend is the backbone for all Widmer Brothers beers and the magic behind Alchemy Ale.

“Alchemy Ale is a great expression of brewing art and science,” said Joe Casey, Brewmaster. “We initially developed the Alchemy hop blend as a way to differentiate Widmer Brothers beers while managing variances in hop crops from year to year. And while the Alchemy blend contributes to all of our beers in some way, no other beer in our portfolio showcases the complexity of flavors and aromas in hop blending better than its namesake, Alchemy Ale.”

“As brewers, we practice alchemy every day,” said Rob Widmer, co-founder of Widmer Brothers Brewing. “There’s a lot of ways to combine water, malt, hops and yeast to brew a great beer. With Alchemy, we really wanted to celebrate the brewing process; turning traditional brewing ingredients into liquid gold – and we’re really happy with the result.”

We practice alchemy every day turning water, malt, hops and yeast into liquid gold. Alchemy Ale melds years of experimentation and our special Alchemy hop blend, in a pure expression of brewing art and science. Join us in unlocking the mystery to the perfectly balanced, perfectly hopped ale. Alchemy Ale has a bright, distinct hop character balanced with hints of caramel and a remarkably smooth finish.

Proprietary Hop Blend: Alchemy hops are a blend of choice hops from the Pacific Northwest, hand-selected by our brewers each year. This secret blend is the backbone of all our beers, and the magic behind Alchemy Ale.

What started as a dream for two ordinary brothers who just loved beer has now become a reality for two ordinary brothers who still just love beer. Kurt and Rob Widmer helped lead the Pacific Northwest craft beer movement in 1984 when, in their 20s, they dreamed of brewing unique interpretations of traditional beer styles. In 1986, Widmer Brothers Brewing introduced the first American-style Hefeweizen; today, the unfiltered cloudy beer is the company’s signature brew and one of the best-selling wheat beers in the country. Based in Portland, Ore., the brewery currently brews a variety of beers including its Rotator IPA Series, Drifter Pale Ale, Pitch Black IPA, Nelson Imperial IPA, a high-end Brothers’ Reserve Series and a full four seasonal lineup. For more information about Widmer Brothers Brewing, visit www.widmerbrothers.com.