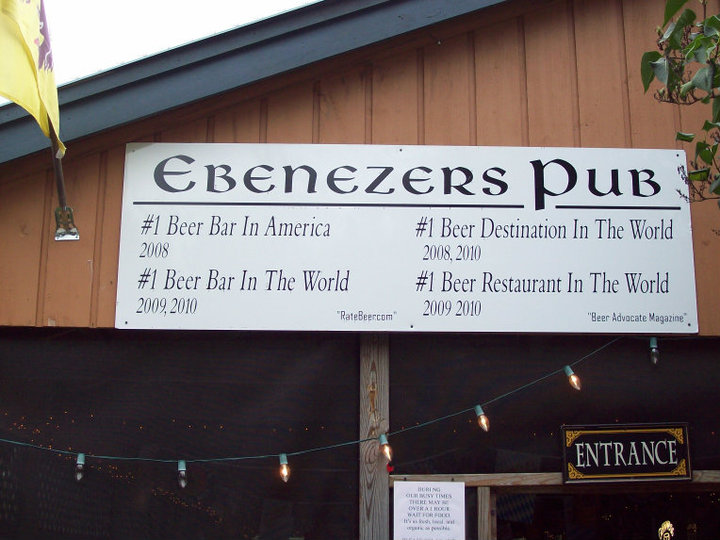 My own pursuit of hoppiness and great beers lead me to Ebenezer’s Pub in Lovell, Maine for their 6th Belgian Beer Festival.  This trip has been managed by the Bieropholie website.  I could gather with friends and get a private driver for the whole weekend.  Isn’t that beautiful?

We left Montréal on Friday to reach Le Siboire, another great brewpub that opened within the last three years in our province.  Located in Sherbrooke, it came to the world in an old train station.  Brick walls, wood, nice view of the brewery, smiling staff, and with music not too loud that offers an inviting ambiance to a quite young crowd.  A tasting panel revealed a high quality of beers, without defaults.  The Belgian White Capricieuse and the Abbey Tripel Trip d’automne III where among my favourites.  The brewer Jonathan Gaudrault, poured us some of his new Citra Pilsner directly from the fermentor.  These new hops (for me) provided a bold citrus taste and made this sampling experience very interesting.  I like it when brewers go out of normal bounds to make the effort to try new recipes instead of just keeping the classical blonde, brown, red and black.

On Saturday, we pick up some US bottles to bring back to Canada at Glen Beverage, in the cosmopolitan city of Glen.  Lots of classics (Stone, Rogue, Dogfish Head, Sierra Nevada), so we didn’t purchase anything special there.  Few hours after, we reached Lovell, Maine.  I was expecting for a crowded site, without any place to

put our tents and it stressed us a little, but when we showed up, there were plenty of places, so much that we could have a table for twelve.  Except the glasses and the t-shirts printed for the event, nothing gave us the feeling that a beer event would take part here.  Instead of a legion of beer geeks, families with kids and grand parents were in the place.  It was miles away of my first thoughts.  Nevertheless avoiding long queues, and being served promptly always a pleasure.  The tap menu was a real Belgian Beervana. A majority of beers I’ve never tasted before and some I’ve never even heard of. This sort of experience pleased our group. I give big thumbs up to De Struise Black Albert, an imperial stout brewed specifically for the pub, a great mix of vanilla, coffee and black chocolate flooded through 13 % of alcohol.  Simply excellent.  Another great extreme brew was the Mocha Bomb, also from De Struise.  Another explosion of coffee, chocolate and bourbon barrel.  Again, I discovered a brewery that creates products that brings your tastebuds to another level.  Thanks De Struise.

I had the opportunity to have my first Cantillon (Cuvée des Champions) on tap.  Acidic (of course), sour and a bit funky.  Great Cuvée that you want another pint of.   I had, like everybody in bar, a glass from a Methuselah of Val-Dieu Triple.  I think this bottle has been offered by Chris, the owner.  If not, thanks to the guy who order a too big bottle and to his decision to share it with the rest of us.

For the evening, an event has been planned by the pub, and Alan Sprints from Hair of the Dog was invited.  I thought there could be a booth, a promotion on HOTD beers, some special kegs, but the event was a presentation from Alan in the Ebenezer cellar including a tasting of Doggie Claws, Matt and Dave.  Yes what you red is definitely true, a taste of Dave.  Of course, some selected bottles from the pub’s cellar did complete this presentation/tasting.  Would you like to see the pictures?  Well, don’t ask me.  I wasn’t there.  Only 20 peoples were admitted in the cellar and the entrance was sold at 50 USD $$$.

Everything has a cost in life, and it is valid for beer, too.  I choose to not pay this amount for 2 ounce tastings.  Try to appreciate a beer when you share it with 20 people…  Even if it is a rare bottle, it is quite ridiculous. Sometimes, you have no obligation to join the family.  That’s why I continued to have beers with my folks at the table.  At the closure, we received a bill of 966 $ USD for the whole table.  Ouch!  But it was so good.

This huge dinner has been continued at the tent village beside the pub with folks randomly met.  We brought some of our great brewery products of Québec like Microbrasserie Charlevoix and Unibroue.  Some other folks from brought growlers of Hill Farmstead brewery.  This brewery will be considered for another trip to Vermont.

Back home on Sunday, we stopped at the Moat Smoke House & Brewing Co.  It’s been a while I had beer for breakfast.  Gee, I discovered that passion has limits.  The worst is that I wasn’t impressed by what I tasted, and it was not caused by the early hour.  Do you know only one great beer is brewed with blueberries?  Can it be only used for jam and pies please?  That was my feeling of the Violet’s B’s Blueberry.  On the opposite end of the spectrum, the German Hefeweizen was quite refreshing.  I can’t really recommend that place, but if it’s on your way, you might give them a try, but try to have a breakfast before.