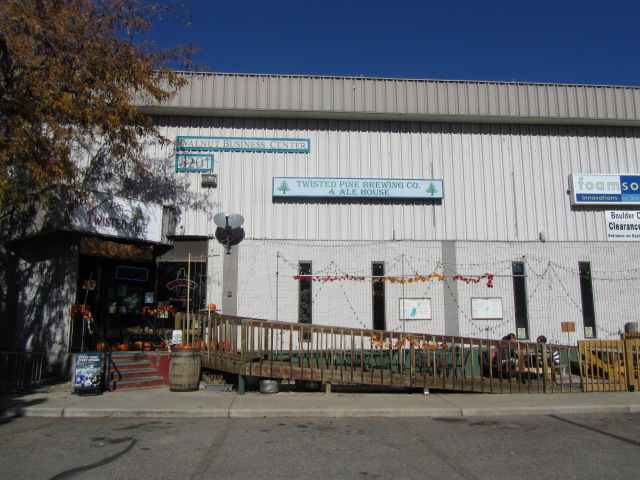 When we first arrived in Boulder, Colorado on Friday, we made a stop at the Twisted Pine Brewing Company taproom for our first taste of the city’s beer. Turns out it was a wise choice, as the variety of beers that were sampled were all aboveboard. In fact, a few were outright spectacular.

Located in an industrial park not far from downtown Boulder, Twisted Pine has been in operation since 1995 and has stuck to a simple mantra: 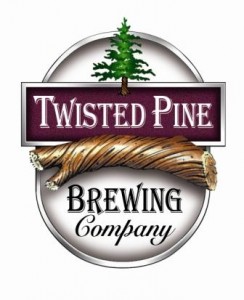 We maintain a strong local presence and feel proud that our beers capture the full flavor and variety of style found at our brewery. It is our intention to bring to you a select family of individually distinctive ales that we as brewers would enjoy drinking ourselves. That is our final measure. We ignore costs, fads, and difficulty in creating our ales. And, while we are very serious about the art and business of beer making, we try to avoid taking ourselves too seriously. After all, we realize brewing a fine beer isn’t exactly nuclear physics. It’s something far more important. 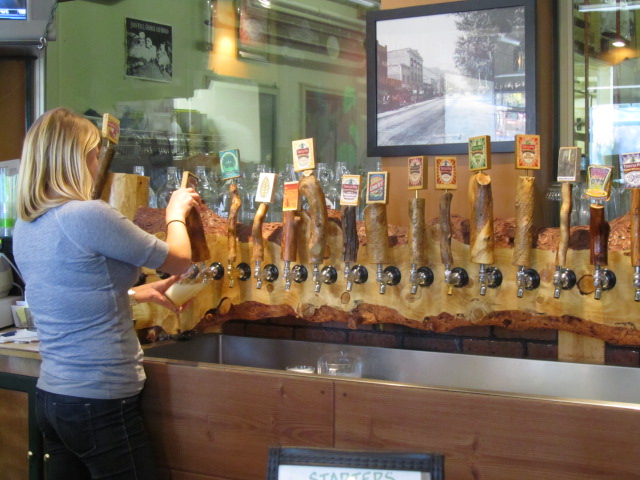 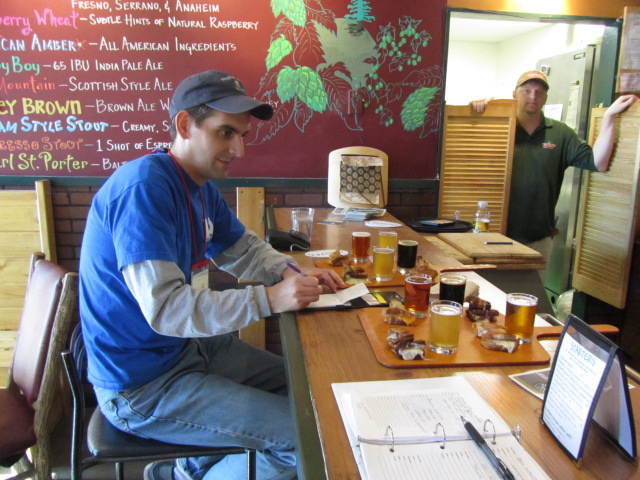 Since we only had a limited time before heading off to our conference on Friday, we tried just a few brews, all of which sounded quite distinct and interesting, and all of which lived up to expectations. 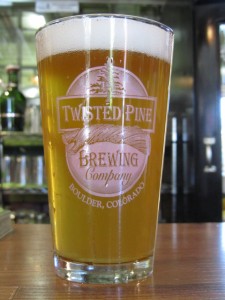 Le Petit Saison: This was a great beer to enjoy in the pub’s sunny outdoor patio while the sun was beaming down providing a rare 70 degree November day. Very light bodies with subtle notes of fruity phenols and a grassy hint from Noble hops and the peppery yeast to provide a clean crisp very light finish. Like the brewery states: “The yeasty characteristics of this Saison make it a natural pairing for a variety of breads, cheeses and salads.” One of the lighter saisons we’ve enjoyed, Le Petit was sessionable if not a bit unassuming. Also, it wasn’t the only saison pouring on this fine day… 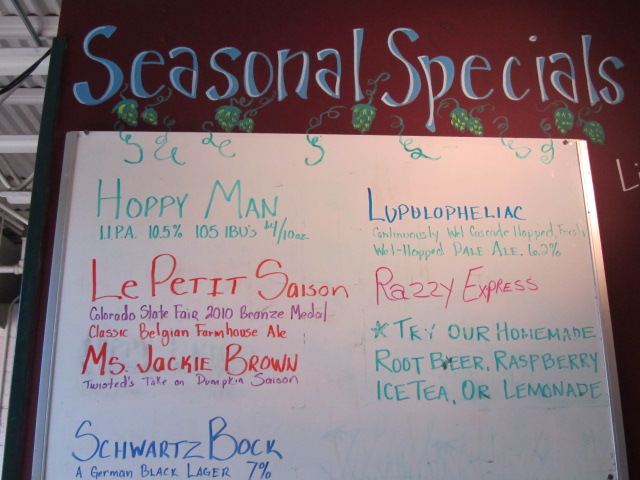 Ms. Jackie Brown: Another saison brewed specifically for the autumn season, this particular rendition implemented a bold pumpkin spice over a bit more malty body than the straight up saison. Lacking a bit of the pumpkin mealiness of many more robust gourd beers, Ms. Brown was a golden-orange hue with a rich nutmeg, all-spice profile. A few folks at our table were quite keen on this brew. 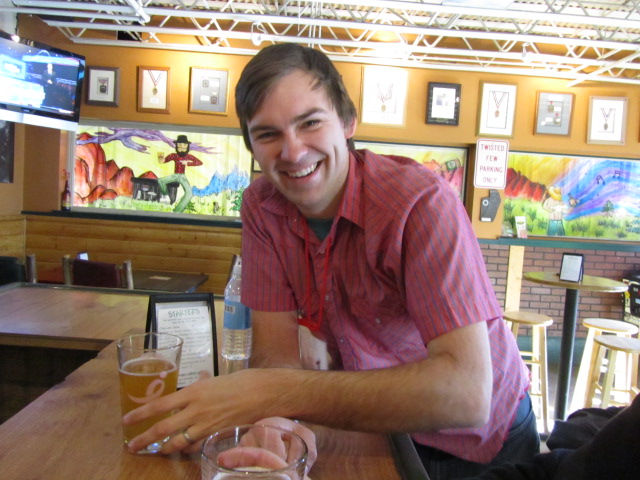 Billy’s Chilies: A light 5.1% ABV golden ale base with a low hop profile (10 IBU), this particular brew is all about showcasing the five varieties of peppers in its bill. The nose foreshadows the bold fresh Serrano, Habenero, Jalapeno, Anaheim, and Fresno chili peppers profile like few others can. The result is a mild heat and a big earthy chili flavor we found far from overpowering.Back to the topic of food pairing, the folks at Twisted inform us that “Pine BillyŌĆÖs Chilies…pairs perfectly with chicken, steak and especially tacos.” An excellent example of a chili brew, this beer is understandably not for everyone, but we love it! 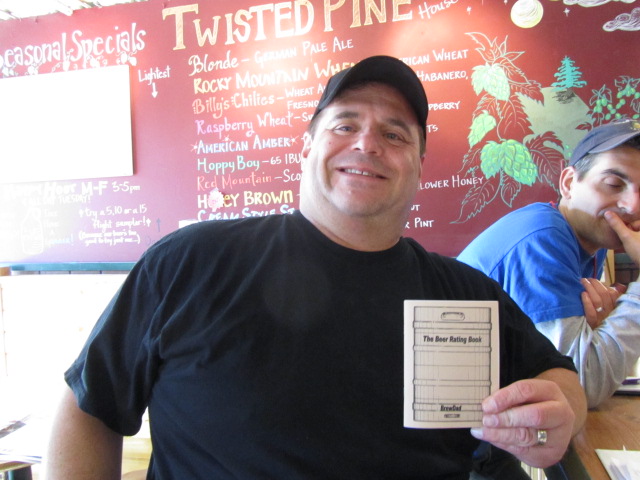 Big Shot Espresso Stout: Fans of Oakshire’s Overcast Espresso Stout will really appreciate this java-centric and robust stout. Employing a shot of espresso per pint, Big Shot absolutely lives up to its name. It could be said that this is the perfect breakfast beer, and we’d have no reason to argue. We enjoyed quaffing more of this during the Sunday session at the Beer Bloggers Conference, thanks to Kerry of Taplister who passed around a growler to many hungover people in attendance. A perennial medal winner at a variety of beer competitions, Big Shot’s most recent and notable accolade was taking home a bronze medal at the 2010 GABF. 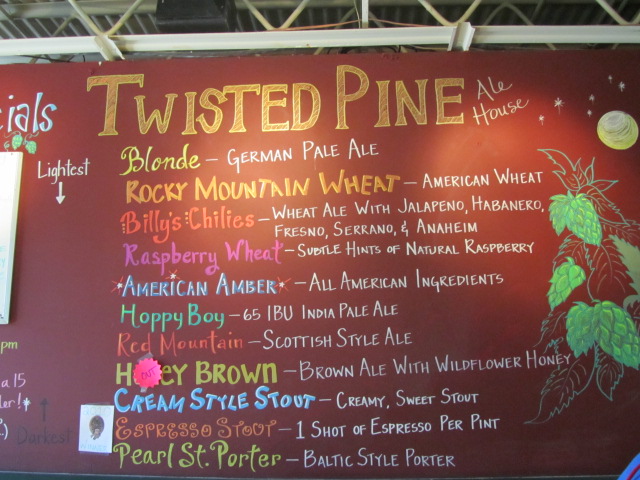 Hoppy Knight: Available in bottles to go, here is Twisted Pine’s Cascadian Dark Ale brewed in celebration of the brewhouse’s 15th anniversary and named after founder Gordon Knight. At 85 IBU, and with a boatload of citrus and resinous piny hops, we found this to be one of the better examples of the CDA/America-style India Black Ale style. Glad we got a bottle to take home. Thanks to Mike of BrewDad for sharing a sample with us. 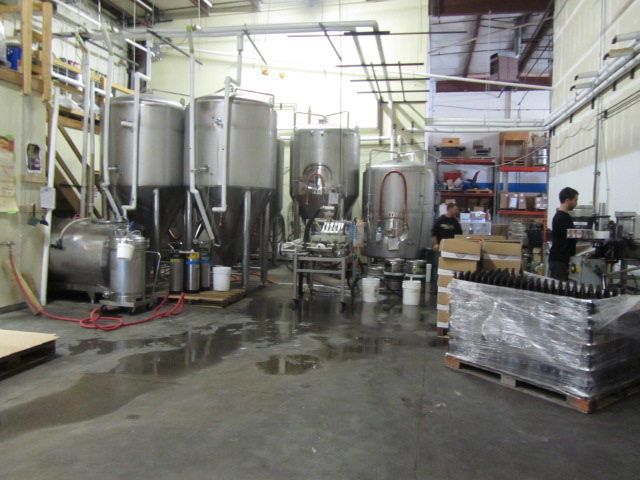 If we had more time to spend in Boulder, we most definitely would find ourselves revisiting Twisted Pine and enjoying their smorgasbord of beer styles. If you’re ever in Boulder, do yourself a favor and check ’em out! According to our friends at 2BeerGuys, their beer can be found in Colorado, Texas, Louisiana and Missouri an future plans include distribution in Arizona and New Mexico.