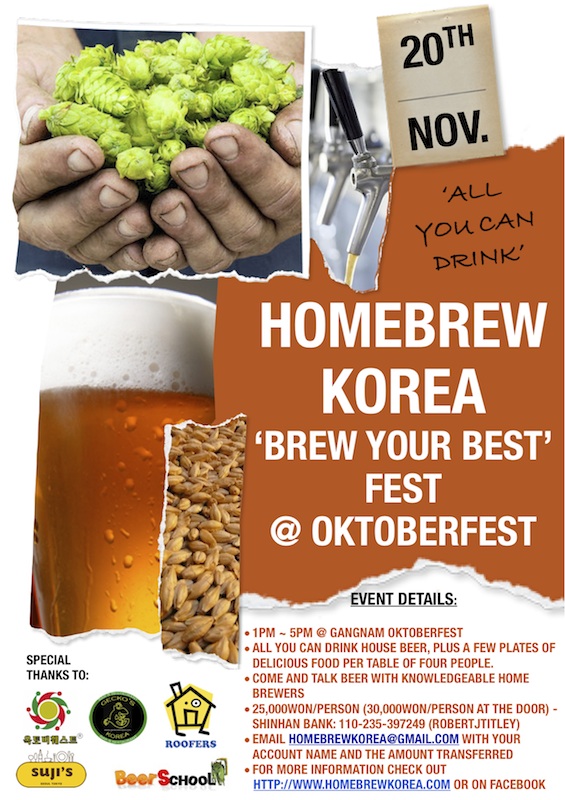 I didn’t drink a bad beer all night.  “But Jay, I thought you were in Korea?  Where are you getting good beer?”  News flash, kiddos: there are enough purveyors of good brew on this little peninsula to incite a few people to take matters into their own hands.  And, the taste buds of many thank them for their crafty ways.

I could thank my buddy Garret, also a beer hound, for turning me on to last weekend’s event: Brew Your Best, put on by Homebrew Korea.  I could also thank Brewpublic’s Angelo, who inspires me to report on beer experiences around the world despite my lack of passion for writing.*  Good thing, I enjoy sipping quality barley pops to continue this endeavor. 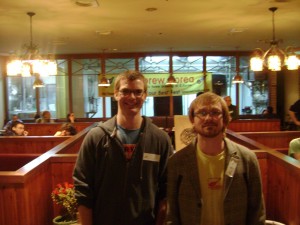 Homebrew Korea’s Rob Titley has put on events like this before in Seoul, but many of the brewers on this peninsula seem to believe this was not one not to be forgotten.  Oktoberfest’s (http://www.oktoberfest.co.kr) location is fairly central for most of the expats in this country.  I arrived on time to be greeted by Rob and his partners Adam and Helen, who insisted I grab a house brew right away.  Oktoberfest offers a standard pilsner, dunkel and heffeweizen.  I had a couple on the house while waiting for Garrett and crew.  In the mean time, Rob got together with me for this interview:

The features of the event included brewers’ own concoctions of their best brews.  More folks than I initially expected took part in the craft of fermented goodness; Koreans and expats alike.  Not everyone was able to sample all of the entries, which amounted to over twenty or so varietals.  There were over 100 beings in the spot, a record presumably.  I personally sampled some light Amber Ales, an Indian Brown Ale, Belgian Red Rye, quite a few IPAs, and even a stout or two from the enthusiastic contestants. 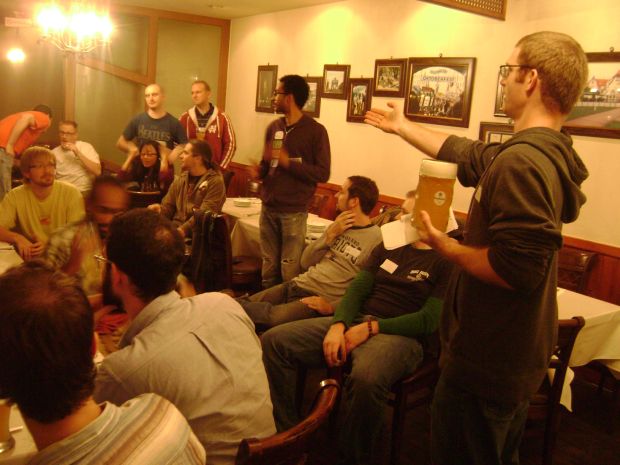 Of all the yeast-laden submissions, the IPA (a big one, by the way) courtesy of Bill Miller, placed first in the contest.  Ryan Rink took the second spot and John Gamboa took the third prize.  Look forward to exclusive interviews from some of these guys in the next segment of Peninsula Brews.  With the many other delightful appetizers quaffed throughout the afternoon, there should have been awards for fourth, fifth and sixth place. 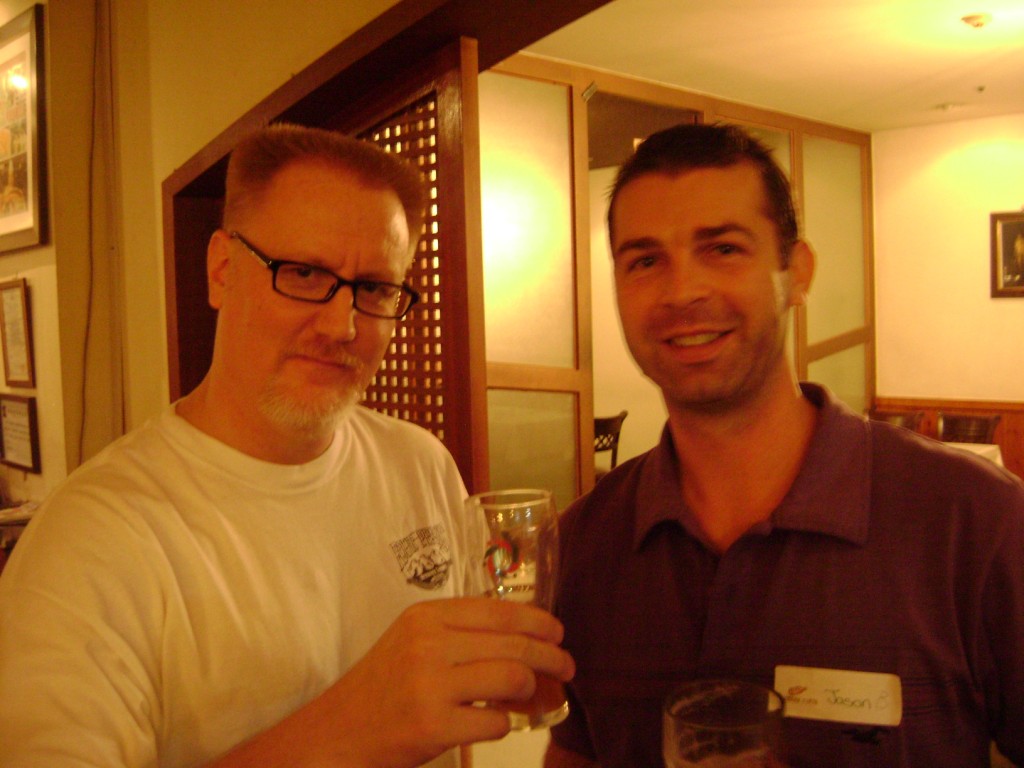 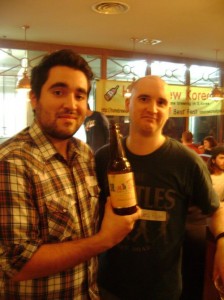 In addition to all the tempting homebrews in one location, some had taken it upon themselves to drag extra bottles along.  Mark had the 90 Minute Dogfish Head with him, there were some Sierra Nevada’s floating around, and even Moylans IPA made an appearance.  From now on, the excuse of limited beer choices in Korea should not keep you from visiting the place, as has been the rumor in most of Asia for quite some time.  Be on the lookout for more of the same on the peninsula.

Readers can also anticipate interviews in the very near future from some of Korea’s more progressive craft brewers with the likes of Bill Miller, Ryan Rink, Garrett Hohn and Jason Lindley.  Slowly but surely, there have been some new brew pubs popping up in the area, so stay tuned.

If we’re lucky enough, nobody will be forced to partake in Cass, Hite, Max or OB ever again.  Although, on a scorching afternoon, which happens here, some might welcome a bit of hydration.

*Believe me, if you know me, you’d know I like being as vague as possible.  There is a reasonable explanation for this, I assure you.

Jason “Jay Bar” Butler has traveled the world extensively to broaden his cultural experience and the hunt down tasty craft beer options.