Jay Butler has seen much of the world from his days in the Navy. After serving his time in the Forces, Jay settled in Portland for some years before traveling back to Asia and Europe. This time, Jay investigated the world of craft brew beyond the plethora he was spoiled with in the Pacific Northwest. You may recall Jay’s post in Brewpublic about his China brew excursions. This time Jay delivers some notes on his travels to and through Europe. From Portland, Jay made his way up to Seattle and found his way across the pond via New York City. In Europe, Jay tasted beers in Netherlands, Czech Republic, Belgium, Ireland, and in Romania where he has been residing for the past few months. Prost!

Medium, orange hoppy bite with a smooth, malty after taste. A true pale ale, but nothing outstanding compared to the plethora of beautiful pales found in the rest of the NW.

I should continue you this epilogue by stating that I should have had this report done by MayDay, at the latest. If I were a brew, I’d be a Lazy Boy IPA…or porter; a non-reporter.

After my short Brooklyn bounce (10 hour layover) and a couple of cold ones, I had to make my way back on the train to JFK. While taking in much of the neighborhoods of Flatbush and those along the Jay St. corridor, this area had a different flavor than East Village. I like to walk around and discover….nooks and crannies, bodegas, people gathering, etc.

I popped into an Irish pub on the other side of the bridge where I was served up, not one, but two of the famous lagers from Brooklyn Brewing. I forgot how tasty this malty beverage was having been spoiled by all the pale varietals on the West Coast. There has also been a release of the Summer Ale I can’t wait to sample when I return to the other side. I regretted having to hop off the stool and make my way underground, but knew that I was on to a new adventure.

Another layover in Dublin only allowed time for a Guinness on tap. This served as a filling mid-morning brunch…that and a biscuit. Time to go fly the friendly skies. On a side note, Air Lingus will charge you for EVERYTHING. I had to make my way ‘off’ with one of those ½ oz. 4×4 blankets ?. 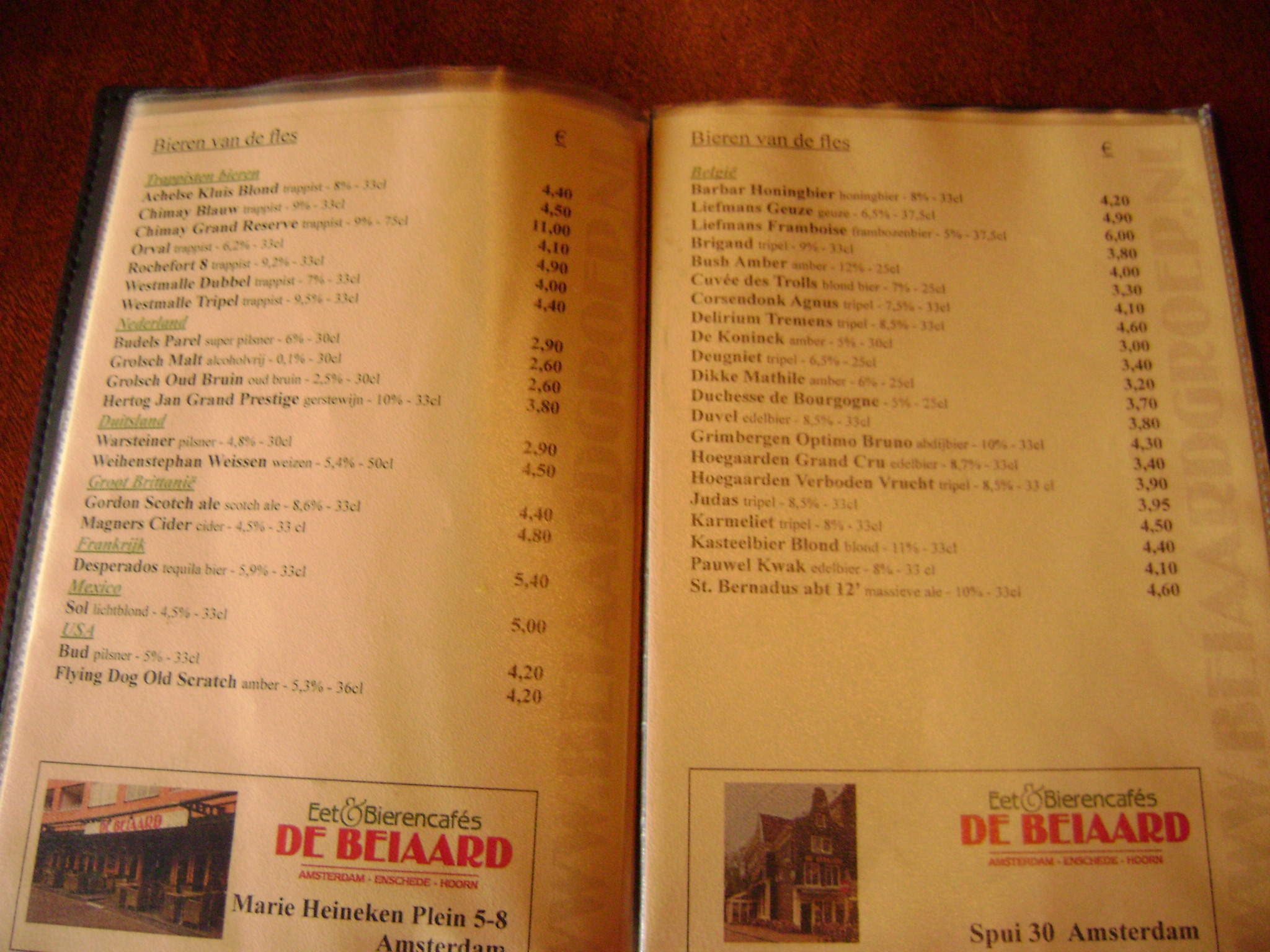 Holland – this particular location had the best selection in biers…meaning one of the only pubs that did not have “Heini” as its main attraction.
DE BeiAArd – See menu photo
Catherine, my host, put me on to this place and it was a little piece of heaven in a tourist-dominated, pseudo-good bier town. First, I should say that I love Amsterdam. It is a very clean and forward-thinking town, much like PDX. One particular American only frequented two of the coffee shops to sample the Jack Heir and Cheese-flavored plants. ‘Nuff said. 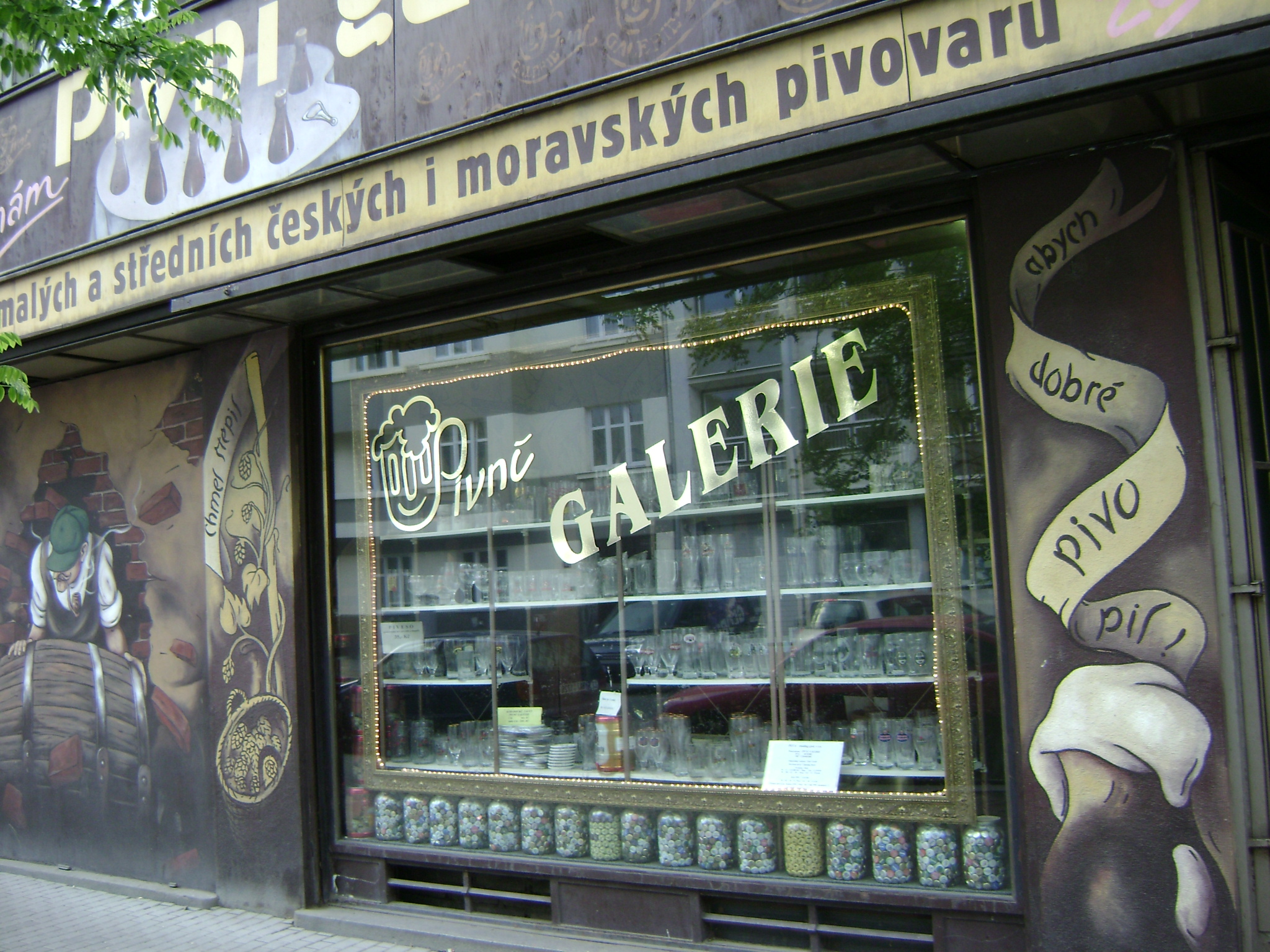 Going from memory (it is now half past the monkey’s ass), the Puvel Kwak was a thump of good lovin’ A super, yeast sweet Belgian kept me busy for almost an hour; I had good company. Notice the crafted flask mitt that held the quaffy-splendor. This bready, malt bomb is a wonderful compliment to an afternoon meal and people gazing endeavor. Holla!

Catherine sent her brother a bottle of this Hoegaarden special for his bachelor party. The Vreboden Vrucht was a tasty bev and a fruity brewgeek’s Eden. Dark, fruity, sweet, mild bitter. Sipped and enjoyed this nice afternoon brew.

The Pilsen brewery was nice. Pics present. Pilsen is just a 45-minute bus ride outside of Prague. The tour lasts about 2 hours and samples are given to ticket holders. A bit of history goes a long way for lovers of pilsner brews.

In Prague –
I only happened upon this bier shop, because it was two blocks from the hostel, Sir Toby’s in Prague, CZ. The name is escaping me (Knam Pivni Galerie?), but you know I like to explore…so it was a good find. I believe I’ve got pics with the name and a biz card, hmmm. Additionally, they sold bottles, but had an exclusive seating of 10-12 tables for members only. I purchased the Hopus, Satan’s Gold and Trol.

The Hopus, which I’d sampled for the first time, poured a nice golden pool with a thick white head. The fruity citrus and honey flavor had me by the balls. The bitter end was quite a delight. Some might say, too sweet.

Satan’s Gold (one of two varietals) – golden brown and vinegary. Average carbonation, some slight citrus flavor and maybe a bit old. Not sure when the drink before date was.

The Cuvee des Trolls. I really enjoyed this Belgian. I typically do not have an every day taste for them. The bottled poured an orange, cloudy fresh sample. Being a sipper, I almost drank it too quickly. This is the trick. A, not too-hoppy, strong Belgian brew.

Writing all of this for the past hour has tempted me to go grab a clitita (Romanian pancake) and a pint of Ursus. My options here are limited. I do have a few though.

Shall I take a train to Budapest, Sofia, Belgrade?? Nothing is set.
Will write about my next beer adventure when I discover something out of the ordinary. It may just be something I’ve never heard of…..most likely.