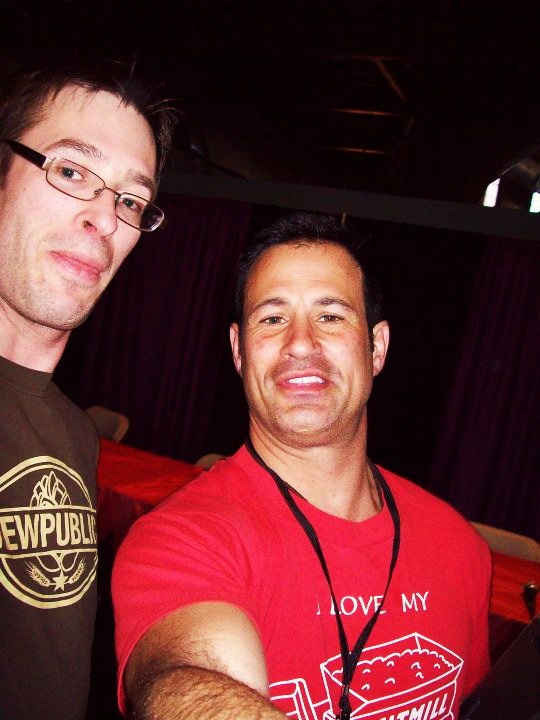 Fill up the car, grease your liver correctly and be prepared for the Extreme Beer Fest (EBF), managed by the Beer Advocate (respect beer). It was my third participation in this event. 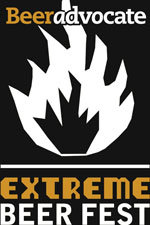 Before, let’s take a look at this 800 miles car trip. Surprise! Our first stop is at the US customs. New security rules… well, they look inside the car, asked us questions and didn’t really understand why four guys would attempt to Boston for a beer festival. We started earlier so we could have a first beer tasting for lunch at the Martha’s Exchange Restaurant & Brewing Co. Eight homebrews where on tap, including an India Red on cask. Thumbs up to the Another Ale, an American pale ale brewed with Simcoe and Warrior hops. Food was quite greasy, so that’s why we will return there only for the beers.

A walk from our hotel leads us to the queue for the first event: Night of the barrels

( NOTB ). A very special, exclusive, and all inclusive evening of wood-aged beers (from fresh oak to bourbon barrels to wine barrels), guest speaker panel, tasty snacks, complimentary hydration, chance to rub elbows with the industry. Not to be missed. Limited to 500 tickets. For a 3 ½ hour session, over 50 different beers were offered at will. Yes, at will monsieur! Even if you try to be cartesian, it is unfortunately impossible to drink all these beers in a short period of time. I can assure you that all Russian River products can perfectly be aged in barrels with brettanomyces. Supplication, Beatification, Consecration and Temptation are incredible chef d’oeuvre. Lost Abbey Angel’s share grand cru is a magnificent blend. Captain Lawrence presented a special blend for the event. For all of you in PDX who likes Cascade products, order some of CL brews, you will be pleased of their sour ales. Portland brewers were represented there with Rogue (John John Dead Guy Ale) and Full Sail (Top Sail Imperial Porter Brewmaster Reserve 08 and 2010).

Even if I recommend attempting to this event once in your drinking life, I discovered that my consumption capacity is affected by barrel-aged products. After a couple of tasting, I would have appreciated something softer, just to change a little. Perhaps that I will skip this session at a subsequent visit and scout for Boston’s breweries and taprooms instead. That’s exactly what we did to achieve this first beery day.

Cambridge Brewing Company has been founded in 1989, which makes it the oldest brewery-restaurant in the Boston area. They installed the brewery in a refurbished mill building where exposed brick, light woods and earthy colors combine for a casual, lively atmosphere (adapted from their website, I don’t have such a good English). Close to Boston MIT, the place serves a crowd of students and they certainly learn good things about beer over there. My favourite brew was the Big Man Ale, an American strong and hoppy ale that felts refreshing after all these barrel aged beers. The other 5 beers tasted there did correspond to their respective style (amber, porter, tripel, scotch ale, pale ale). An excellent local brewpub.

Session 1 of the Extreme Beer Fest.

100+ Extreme Beers from upwards of 27+ American brewers. Quite possibly the best fest on planet Earth, and now in its 7th year, this is the original fest that helped define what “Extreme Beer” is all about. This epic celebration of American brewers who push the boundaries of brewing will feature a stellar line-up of creative and unique beers. Limited to 1,000 tickets per session. A must. Simply a must for the quality of beers presented here. First thing to do is to try to get the most precious ones. Instead of Night of the barrels where the kegs had no ending, the situation is critically different today. Alex gave me a sip of the Sierra Nevada vintage 1994 Bigfoot barleywine. This keg runs out in less than an hour, same thing for the 27 % 2009 Samuel Adams Utopias. Gone! A real chicken run and you can’t drink those precious beers like macrostuff. The strategy I adopted was to have one and taste it while being in another line up. Russian river with Pliny the Elder & the Younger had a huge line up, so did Dogfish head with magical brews like the World Wide Stout and the 120 minutes IPA. I would like to drink gallons of those beers. A Lagunitas Hop Stoopid remembered me that Brewpublic anniversary party at Savaveza’s. Good times there.

I had the chance to have a Lost Abbey Framboise di Amarosa (well I thought the name was Frambooze…), added at the last minute to the line up. So intense, raspberry, lactic, kind of drinking a glass of jam… so I had another madame s’il vous plaît.

A discovery from Italia, Birrifico le Baladin. Xyauyù Fumé 2006 is certainly the weirdest beer I’ve drink. This barley wine smells like smoke and taste like kind of ashes and peaches. Even if it has 13,5% of alcohol, it is quite soft. A very strange beer sold at 50$ USD. The aging process of this beer seems complicated and takes 2 years ½, which explains the high cost of that unique product.

Wormtown brewing presented a Medieval Ale. It is always interesting to learn and figure how beer might have been brewed in the past times. This beer has been mashed one hour, put into a fermentor, casked and served 36 hours after brewing. It gives a flat beer with a taste of cereals and a touch of herbs. Interesting recipe which combines history and alcohol.

After all those (and others) incredible beers, we went to the Sunset Grill & Tap. This place offers the biggest beer selection on tap I’ve ever seen. 112 taps. Can you beat that PDX ? A Turbodog from Abita Brewery and a Bear Republic Racer 5 kept me in shape before dinner. Every time we come the Sunset is during the EBF. I would like to see this place when it is less crowded, if it happens. Nevertheless, the service was excellent and it bar is a must, just for the view of the 112 taps line… Think of it!

We choose to have a dinner at the John Harvard Brewery. This brewery is very nice, but those extra large tv screens does give a sports bar ambiance, which doesn’t fits to me. Anyway, we tasted 5 brews there and conclude that everything was good, but not exceptional. A good brewery to initiate your fellows who only drink major’s breweries. If they don’t like, they could listen the hockey game while you sample the beers.

On our way back, it is essential to fill up the car with good and precious bottles at Julio’s Liquor Store. Just imagine the Belmont Station with enough space to shop with a cart between rows. I saw few bottles of Cascade Kriek ale, but they disappear suddenly, bought by somebody with a no-ending throat. Anyway, the choice offered here is so amazing. As long as you have enough budget (some bottle are getting quite expensive), you can fill your cart with great brews impossible to have in Québec. Our cellars will be more respectable, for a while.

After the loading process, we drove to New London, NH at the Flying Goose Brewpub & Grille. We had a good surprise there. 15 different beers are offered to local consumers. I did prefer their porter and the brown ales offered. Haven’t found incredible beers there, but everything been good, which is a good point.

The last beer stop we had will be described in another post. I really think it is deserved. Keep on reading.

Yeah! It’s been a long a time I had a major failure with a car. Our driver exploded the water pump before the US customs. We’ve been able to run the car to Canada and then make an hour towing ride back to St-Hyacinthe. Three beer geeks squeezed on the front seat. Shit happens, but we saved the beer.