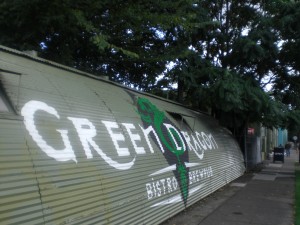 Apparently the news we broke of Rogue’s intention to acquire the Green Dragon Pub and Bistro raised quite a stir.  In John Foyston’s article about this yesterday in the Oregonian, it was mentioned that it sounded like “(I) didn’t talk to the Rogue Folks.”  This is true.  In fact, being a lesser known resource than the big O, we often don’t get the press releases or inside scoop on a lot of the local beer happenings.  I tried to comment on the Beer Here’s blog, but was unable to do so.  What I wanted to let people know is that I made attempts to contact Rogue and the Green Dragon.  Rogue sent a vague letter from their “Attorney General” (lawyer), Brian Schweppenheiser demanding a retraction and clarification.  Schweppenheiser wanted me to clarify that “no employs have been fired.” I didn’t say anyone had been fired.  I reported that “Officially no one has been fired but no one is expecting to have a job and they already have new people lined up.” Schweppenheiser also asked me to clarify that “no employees at the Green Dragon have been fired, we do not have new employees “lined up”, the proposed purchase is not final and is subject to regulatory approval, the Green Dragon will not be closed down for 3 days.  It will not be closed at all.”  Schweppenheiser continued: “while it is true that we export Rogue Ales, Stouts, Porters, and Lagers to 19 countries, it is not accurate that “many feature repackaging of other available brands.”  We make special bottles (Red Fox, White Crane, and Brown Bear) in Japanese for our long-time importer, bar owner, and Japan craft beer pioneer Phred Kaufman.  All other Rogue Nation countries offer the same beers made available in the U.S.A.- no “repackaging” at all.”  When I sent a follow-up email to Schweppenheiser for my own clarification, my message was ignored.  I asked him “Why don’t you clarify what is really going on with Rogue and the Green Dragon so I can let people what is up.  Also, I know for a fact that you repackage your beers such as the Jazz Man, the Saturday Market Beer, and a number of the Aquarium series beers which are simply other Rogue beers with different labels.  Is this not true or are websites like Ratebeer.com and BeerAdvocate.com wrong about this?”  Thusfar, no response.  We also received a comment on the post from Brett Joyce, current president and son of founder Jack Joyce, announcing the demand for retraction and clarification, restating the same bulletin points as  sentiments of his lawyer. Joyce also commented “So, the rumors are true that there is a proposal, but nothing concrete. Glad to hear the staffs jobs are safe for a little while. Everyone at the GD always treated me great, sad to see it go.”  What is that supposed to mean?  “Safe for a little while”?!  How long is a little while and isn’t he the president of Rogue?  Most people’s fears echoed in the comments of this blog appear to be that of what Rogue will do to the establishment and its labor once they have control of assets.  Joyce, from this perspective could be interpreted as making it sound as if the Green Dragon is the one who would be responsible for job cuts.   Hmmm.

So, after a day of anticipation to talk to a human being about what is really up with this situation, I was able to speak with Ed Schwartz, majority owner of the Green Dragon.  Schwartz appeared up front and cordial about the goings on with the deal, and has always come across to me as a straight shooter.  I interviewed him this morning and he put some perspective on things from his end.  Schwartz said “I am looking to sell (the Green Dragon). I have gotten some amazing surprises to change occupancy.  When we opened it was 49.”  When I asked him what the current occupancy is, Schwartz was unclear whether it is 49 or 98.  “(Occupancy) needs to be 200.” Apparently after toiling with the city, a struggle for many business owners, especially when dealing with alcohol, Schwartz seems tired, frustrated, and in financial upheaval.  “I just got a call from the city and they another $50,000 in fees” said Schwartz.  “For what needs to be done, is going to cost $220,000.  I don’t have it. Here’s the deal: the only way the company has been going on is by me putting $10,000 into it.  I am trying to do what’s best for the employees.”  According to Schwartz, however Rogue, as a potential buyer views the Green Dragon as “over-staffed by five people.”  To accommodate this issue, if Rogue buys the company, people would be forced to move to Flanders (Rogue’s current Portland ale house location).  Said Schwartz “The only people to lose a job would be those who are hung up.”  From his tone, I wasn’t certain if Schwartz was truly confident in Rogue or in dire need of a quick financial fix.  “The whole reason Rogue is doing this is they don’t want to make it a typical Rogue Place.  I mean, they don’t want to completely take over and make it Rogue.  The idea is to keep all the current guest taps and install an additional twenty taps for (Rogue) beers.”  Schwartz seems to genuinely care about the welfare of his staff.  “I am trying to do what is best for the employees” said Schwartz. So what is the timeframe on a potential changeover to Rogue?  “We’re looking at Wednesday-ish.” he said “There will be no interuption of service but if and when it goes through, (Rogue) will shut it down for a few days.” As of right now: “Nothing has been signed.”  May the Schwartz be with you.