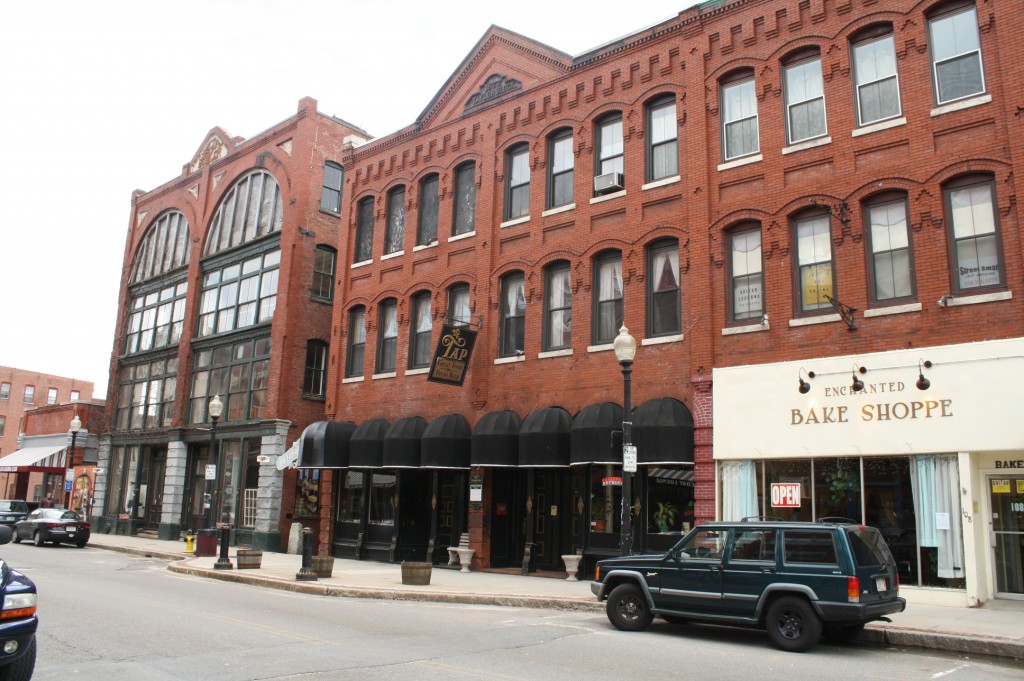 Brewpublic’s East Coast beer adventures continue as we head North from Worcester up the I-495 and into Havehill, Massachusetts. Here, in a historic city, once booming amidst the 19 Century, remains, like much of today’s post-industrial New England, a quiet shell of the past. In downtown Haverhill, the imposing brick building remain a symbol of its history when the Northeastern Massachusetts city was renowned for its world famous shoe factories.

In the heart of the city, on Washington Street and on  the banks of the Merrimack River, resides the Tap, a restaurant and bar dating back to the late 19th Century . Like many of the surrounding architecture that defines the remnants of yesteryear, the Tap is in a towering brick building. Since the early 21st Century, the building has also housed a microbrewery. Haverhill Brewing, under brewer Jon Curtis, produces a variety of ales and lagers in the underbelly of the building. We stopped in, unfortunately missing Curtis to the Craft Brewers Conference in Chicago, Illinois, and ran the gamut of Haverhill’s craft beer offerings. Here’s our notes:

First off, we’d like to acknowledge the kind bartender working the front during the lunch hour. A gentleman in his early thirties with a faux-hawk hairdo and tattoos (he looked like he could rip your head off if you crossed him, but was so very kind and accommodating), this guy made some valid recommendations that coincided with our takes on the house offering. We also were provided with free popcorn from a nearby popper to help cleanse our palate between samples. 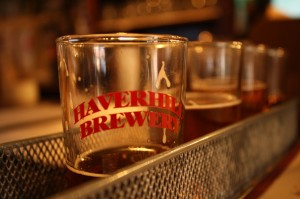 Haverhill Brewing at the Tap offers 16-ounce pints for $4.25 or five 5-ounce samples in a wire-sided tray for $6.50. We opted for two of the later (just shy of two trays worth in the whole lineup, so our server provided us with supplements of our two favorites to fill the second tray).

Haverhill Ale: Haverhill’s best selling flagship beer, this beer was coined “The king of ales so get off your ‘bud’ and try one.” A light, clear straw hue with a minimal white wispy head, this beer was what you might refer to as a “steam” or California Common Ale. An lager brewed at ale temperatures, it was easy to understand why this highly sessionable beer was a house favorite. Clean, crisp, and with a mild sweetness and well-attenuated finish was one that we’d reach for if we were regulars to this area. 4.5% ABV, 18 IBU.

Homerun APA: The term “APA” or American Pale Ale, is a readily used name for a style in New England. Not as beefy as a Northwest pale ale, the APA, at 6% ABV and 50 IBU, played more like a golden ale with a deep copper-bronze and clear body and soft white top. The nose was riddled with butterscotch notes indicative of prominent diacetyl with some fruity esters from the yeast and sharp Glacier, Ahtunum and Cascade hops. Bitter and dry on the tongue, this beer was not to our liking and our sample remained unfinished. Unfortunately, this beer did not hit it out of the park for us. 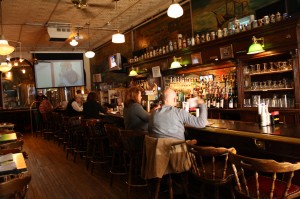 Leatherlips IPA: 5% ABV, 50 IBU. A deep copper-bronze clarity almost identical to the Homerun IPA. Using Centennial, Nugget, and Chinook hops, this beer also revealed some diacetyl in the nose, though not as prevalent as the APA. Piney astringency dominated the back of the tongue. Another attempt at a hoppy brew that missed its mark for us.

Gesalt: A German Alt-style ale with a deep chestnut clear body and fluffy white head, this 5% ABV, 40 IBU brew was an attempt at the Dusseldorfian style. Dubbed by the brewery as “the complete beer,” Gesalt is the newest year-round offering to Haverhill’s repertoire. Dry, roasty, and full of chewy malt flavor. A solid brew with no apparent infection issues. Quite drinkable and a nice representation by the brewer.

Whittier White: A cloudy, hazy orange-golden body with a thick white head, this 4.6% ABV, 36 IBU ale was a brew we’d been recommended by our barkeeper. Fruity, spicy notes from the use of suspended yeast, orange peel, Curacao, coriander, and “a top secret spice,” this beer was both refreshing and quenching. 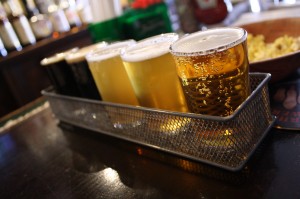 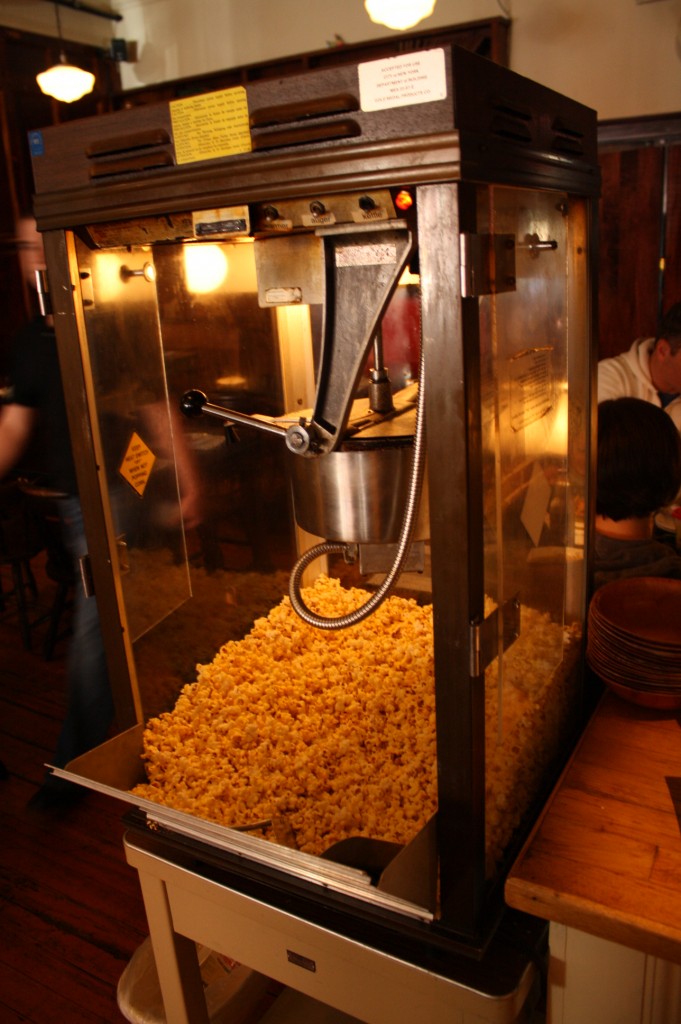 Last Stop Cask Lager: On special during our visit, this dry-hopped (with Tettnang hops) golden lager was crisp, floral with a biscuit creaminess, and available for $5.25 for a 20-ounce pour. Quite clean and refreshing, the prominent 25 IBUs shined over a 5.5% ABV (well-masked) alcohol.

Three Graces Belgian-stye Tripel: The biggest brew on the menu at 9.1% ABV (35 IBU) was another recommendation of our goodly server. Using Pils malt, Styrian Goldings, and sugar, the commercial description stated “Special yeast strain originally from a small brewery in Belgium” where “the yeast makes the beer.”  Available in 12-ounce glasses, Three Graces was our favorite beer here. A hazy, murky golden color with a big white head, there was a big fruity, peppery essence in the nose. Clean and dry, this beer was also available to go in 22-ounce bottles that we gladly purchased for the road. This beer gets an A. 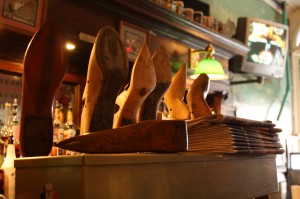 Before we hit the road, we also purchased a bottle of Haverhill’s Snowbound Old Ale. We’ve yet to try it but look forward to it. Overall, we enjoyed the beers of Haverhill, though the hoppier offering left something to be desired. Perhaps we’ll have the opportunity to return and give ‘em another go. If you ever find yourself in Northeastern Massachusetts and you seek craft beer, you know where to visit. 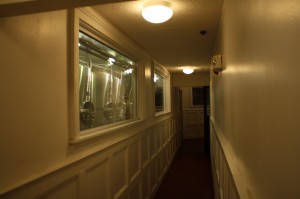