Here’s a look at Belmont Station’s Bier Cafe beer menu from this week.  Note: the names in green are fresh hopped (except for Klamath Basin’s Migration Destination barley wine). If you haven’t gotten down to Belmont to try some of these…do it now!  The Laughing Dog Hop Dog won the people’s choice award at this year’s Yakima Fresh Hop Fest in Washington.  Several others definitely worth trying are on this list.  Belmont also carries a bunch of other Fresh Hop beers in bottles in their store side, such as this year’s Sierra Nevada 12th Release Harvest Wet Hop Ale, BridgePort Hop Harvest, and Hales O’Brien’s Harvest Ale to name a few. 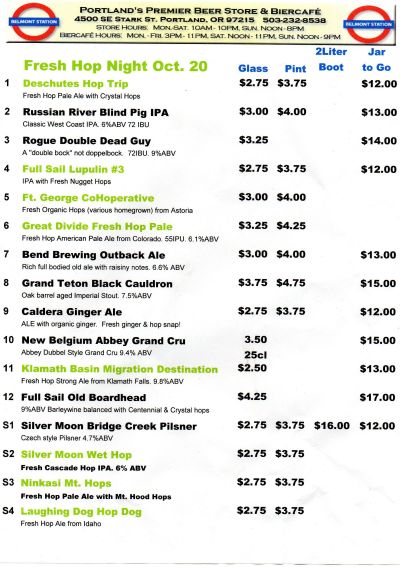