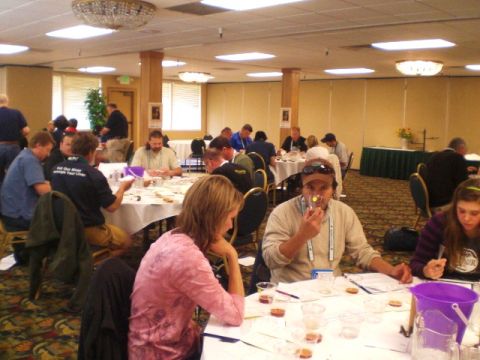 A few years ago, if someone was to tell me that Idaho Falls, Idaho was a must visit spot for craft beer, I’d have laughed at the notion. However, as the craft beer revolution unfold before our very palates, more towns like Asheville, Astoria, and now Idaho Falls are putting up a good fight to liberate libators of the dud suds. Granted, there’s a lot of work to be done, and the battle is uphill. It was evident from the tap selection at pedestrian establishments like Applebee’s that the conglomerate macrobrewers still have a stranglehold on people’s options and perception of beer. One good thing about macrobeer and big scale craft beer, is you can often count on invariability. The Blue Moon White, Widmer Hefeweizen, and New Belgium Fat Tire I drank at Appleby’s were all certainly clean, crisp, and as I expected them to be. You’d be hard pressed to find one of these beers on tap and be a sour or butter bomb (save for somewhere that doesn’t move the beer quickly enough, stow it properly, or neglects keeping taplines clean). On this first evening in Idaho Falls, I was satisfied knowing that there would be a lot of different beers in the week ahead. Not just the flights of beers to judge, but at the Mountain Brewers Beer Festival that would be the highlight of the week. Further, my roommate for the week, Shawn Kelso of Barley Brown‘s, brought growlers of his hop-forward craft beers that I prefer to most.

At the conference center of Idaho Falls’ Red Lion hotel, panels of beer judges, including myself, worked through what would be 149 flights and nearly 1,200 beers. Following a truncated first evening of judging on Tuesday, the real legwork began Wednesday at  a.m. Many folks not in the know might perceive beer judging as a drinkfest; one that is fun, easy, and cool to do. But judging beer, as anyone who is a seasoned BJCP (Beer Judge Certification Program) student knows, is hard work that requires arduous note taking, advanced sensory awareness, adequate communicative skills, and the innate ability to discern an array of characteristics and off-flavors in an objective and categorical manner. 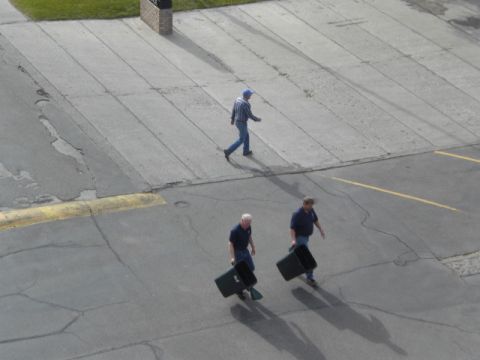 To be honest, my beer judging experience coming into this year’s panel was rather limited, though I was working from a mostly hermeneutic consistency standpoint. This means I have, for some time, analyzed beer in a manner that is consistent and involves coherent explanation. Basically, I’ve critically tasted a boatload of beers with the objective of identifying the characteristics that substantiate each one. I’ve been involved with a few BJCP courses and have come to appreciate the range of interpretations one person’s palate can hold over that of the next. Still, the majority of my critiquing of beer has been at homebrew competitions and in various round tables with other beer-minded folks.

In the room was a smorgasbord of varying experience levels when it comes to critical analysis. To be honest, I would have to rate myself somewhere in the middle. I view this experience as a stepping stone toward further enhancing my ability to characterize and methodologically understanding what defines a beer as more than simply “good” or “bad.” In the room was accomplished brewers like Pelican’s Darron Welch, Widmer’s Ben Dobler  and founder Rob Widmer, to name a few. These are folks I respect deeply when it comes to quality, consistency, and dedication to their trade. They each have a practical scientific and theoretical understanding of brewing, from boiler to bar top, that I’d be safe to say dwarfs my own. Still, from my vantage point, the hermeneutics behind me probably tasting more brands of beers critically than the average brewmaster could have added an interesting element to the equation and outcomes. I was nonetheless approaching this experience humbly and with much to learn. 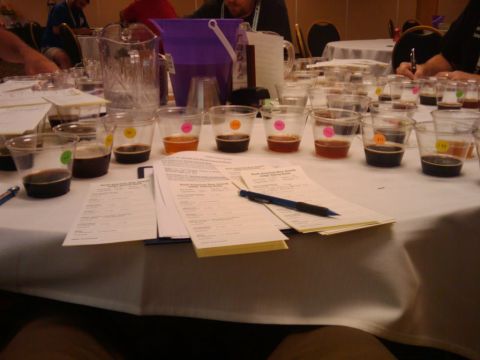 Discussing the elements that qualify and quantify beers is a great way to learn and enhance your palate and perception. The average beer drinker likely knows a badly skunked beer when she tastes it, but the nuances of ingredient play and subtle off-flavors like diacetyl and DMS are probably not on everyone’s mental checklist. Most folks, even those who train themselves in the ways of objectiveness, are still swayed by marketing, especially attractive and beckoning labels on beer. The great thing about beer judging is trying a brew in a bare-bones environment where the appearance, aroma, taste, mouthfeel, and overall impression are what dictates your feelings about the beer. There’s also the biases each judge and taster brings with him to the table. For someone who really doesn’t enjoy the bitterness of an IPA or the sourness of a lambic, it is quite important for him to be cognizant of these feelings as personal preferences, and to develop the ability to discern quality in accordance with fixed style guidelines.

The first full day of judging at NABA began early. While 9 a.m. typically is a good time to begin your day, it’s not, at least for me, the ideal time to begin ingesting alcoholic beverages. So, it’s safe to say, it was hard to get going. At my first table of tasting beer with alcohol (the night before I judged carbonated soft drinks and non-alcoholic beer), I was  joined by brewer Rudy Borrego of Snake River Brewing in Jackson Hole, Wyoming, Todd Campbell of Pelican Brewing, a few NABA folks, and a nice woman named Michelle from Ball Corporation, world’s leading suppliers of rigid metal and plastic packaging products and services (among many things, Ball makes cans for beer). Local homebrewer and NABA volunteer named John was also in the panel. A friendly man, John provided me with a little insight to the goingson in Idaho Falls. “There’ s really nothing here for young adults” he commented “It’s boring.” John was content living here and enjoyed the quiet life. I figured that by the end of the week, I’d be ready to return to Portland where there’s no shortage of great beer and progressive artistic culture. While waiting for our first flight to arrive, John spoke of the two malting facilities in town. Anheuser-Busch and Grupo Modelo (makers of Corona) were two imposing structures visible from highway 15 as we approached town. Talking with John and folks from AB and Modelo, the grain of Idaho is a matter of local pride. The region boasts some of the best and widely abundant barley harvest and malt production in North America. Interestingly, John mentioned that Idaho Falls has more beers per capita than any other city. 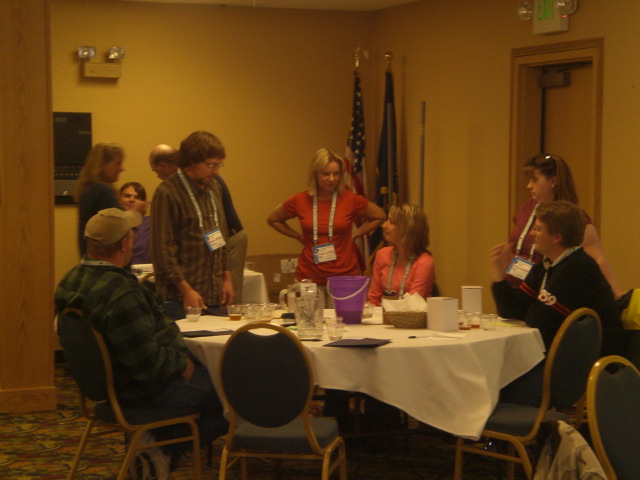 At 9:30 a.m., our table received a flight of entries for the brown porter category (10A). Being a preliminary round, it was our table’s mission to find the three best representations of the style and advance them to another round. By 11 a.m. we were working on Irish Reds (category 8D). And, at noon, the hotel staff catered in food. It would turn out to be the same offering each day, cold cuts, not something I as a vegetarian was too enthusiastic about. Still, there was beer, a lot more beer.

After the break, three more categories would find their way to groups I was assigned to. After meeting an assortment of mostly friendly and interesting people, and laboring through Belgian Wits (16A), American Pale Ales (6c), and  liver-bending Wood Flavored Beer (18c), the work day had commenced. As interesting as evaluating myriad beer styles, was the side conversation of folks. Gathering an understanding of these Americans’ backgrounds and lives. One gentleman offered an idea for a beer blend consisting of Anchor Old Fog Horn and Pyramid Apricot that I will have to try someday soon.

After Wednesday’s judging was complete, Shawn and I retired to our room to relax and unwind. A spot of  Barley Brown’s Turmoil Cascadian Dark Ale was surprising well received by my body after this full day of sipping. Soonafter, we headed over to Idaho Brewing near downtown to attend a private party being thrown for NABA judges. This wonderful event included a spread of free food, a live band, and a variety of free beer from different Idaho breweries. Of all the tasty craft beers available, my preferred brew of the night was Lost Continent Double IPA from Grand Teton Brewing in Victor. Despite troubling weather reports, the evening stayed dry and relatively warm. This made for a nice relaxing experience on the brewpub’s deck that featured a beautiful pink sunset.

Morning seemed to come sooner Thursday than it did the morning before. Perhaps the second Double IPA and nightcap were not the wisest of decisions. A 9 a.m. panel featured a sizable number of American Pale Ales (6c), followed by Strong Pale Ales (6E), German Pilsners, and a medal round flight of Brown Porters. Again, this education experience was filled with getting to meet new people like Tony Savoy, the brewer-owner of Flyers Restaurant and Brewery on Whidbey Island in Washington. I’d actually met Tony before at festivals, but never got to talk to him much though I have greatly enjoyed his beers. I really enjoyed judging with him and learning more about his brewing background that involved a stint at Skagit River in Mount Vernon, Washington. 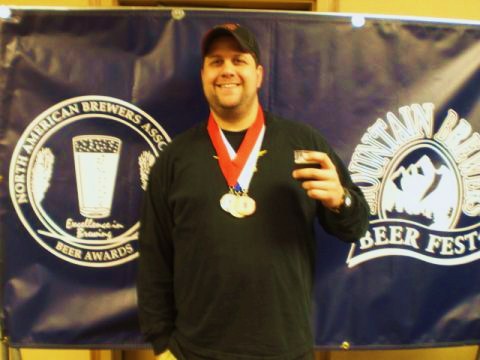 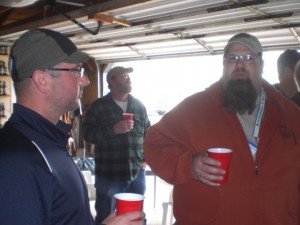 Near the end of the judging day around 4pm, Andy Shaw of Grupo Modelo, a local guy who has been involved with NABA since its inception back in 1997, announced a barbecue that he was hosting at his home. I was quick to see that Andy was a charismatic presence at the event and most of the returning judges where friendly with him. Andy arranged a taxi shuttle to bring groups of people to his home about three miles from the Red Lion. Here, Andy and his wife graciously provided an amazing spread of food coupled with some of Andy’s impressive homebrews. On tap he offered a stout, Bavarian hefe, and perhaps the hit of the night, a pale ale brewed exclusively with New Zealand Nelson Sauvon hop, that emitted a wonderfully floral gooseberry and chive aroma. Matt Beamer from Squatters Brewing of Salt Lake City, Utah also provided tasty bottles of their Hop Rising Double IPA and their Saint Provo Girl Pilsner. 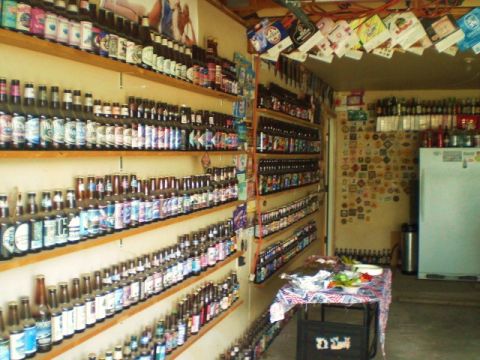 Around 7 p.m., I was quite tuckered  and ready to call it a night. So, back to the hotel to catch some of the NBA Finals on television and rest up for the next morning. On Friday a bit more judging would continue before the NABA medals would be doled out at 5 p.m.This was going to be the home stretch for the judging. However, the Mountain Brewers Beer Fest on Saturday, I knew, would likely be the biggest beer event of all.