Last weekend, I’ve joined the Rencontres Inbièrenationales, 6th edition. This trip is yearly organized by the Loup Rouge, artisan brasseur. We were a group of 12 who gathered for scouting breweries and brewpubs. The theme of this edition was the Lawson’s road.

Lawson’s Finest Liquids, LLC is based in Warren, Vermont and distributes small, custom batches of unique beer through their exclusive wholesale distributor. We did follow the distribution pathway of the America’s smallest commercial brewery.

The first Lawson stop was at the American Flatbread in Waitsfield, Vermont. Their thin pizzas are famous. There are five or six different locations of the AF and the one in Waitsfield is the first one of the chain (I use to know only the one in Burlington). A keg of Lawson’s Chinooker’d IPA has been put on tap just for our visit. Thanks to Mr. Lawson. Excellent IPA with 6,5 % alcohol and an intense hoppy taste! We did enjoy the place and the beer hunter cat.

The Warren Store in Warren, Vermont was our second visit. Because we are good beer tourists, the brewer reserved us few bottles. It is a unique opportunity. Those brews are only distributed in Vermont in a very small scale which makes them quite rare. I bought two bottles of the excellent Chinooker’d IPA.

The Pitcher Inn. Just in front of the Warren store. It is hard to describe this place. Think of a huge colonial house with a private high-class hunting club in the basement. They were quite surprised to see a rumble of 12 thirsty French beer tasters. I had a glass of Lawson’s Papelblonde Ale, with an interesting hoppy punch, a real surprise.

Editor’s note: For those of you who are Red Sox fans, Lawson’s also has a Weiss K wheat ale, and the Big Hapi India Black Ale. 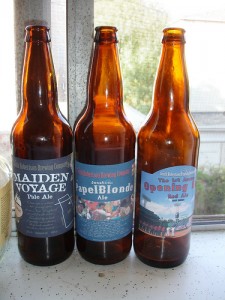 The Common Man Restaurant. Over 150 years old and one of the most charming and romantic 19th century barn’s in New England. The soaring hand hewn rafters of the timbered interior are lit by crystal chandeliers, soft candlelight, and a huge open hearth manor fireplace in season. Thumbs up for the collection of Dom Pérignon bottles on the walls. Drinking champagne in a sugar camp might be a strange experience. It was a real contrast from our last stop. Slightly weird place were you may rather expect a visit of Santa Claus instead of beer taps. We disturbed a little the regulars, but they realized that we were not troublemakers. Lawson’s Maple Nipple has been tasted. Interesting, but I personally didn’t detect the maple taste.

All those places and brews were totally new for me during this trip. We did combine those four stops with others places. For sure, we did beer shopping before returning to Montréal. That will be described into another post.