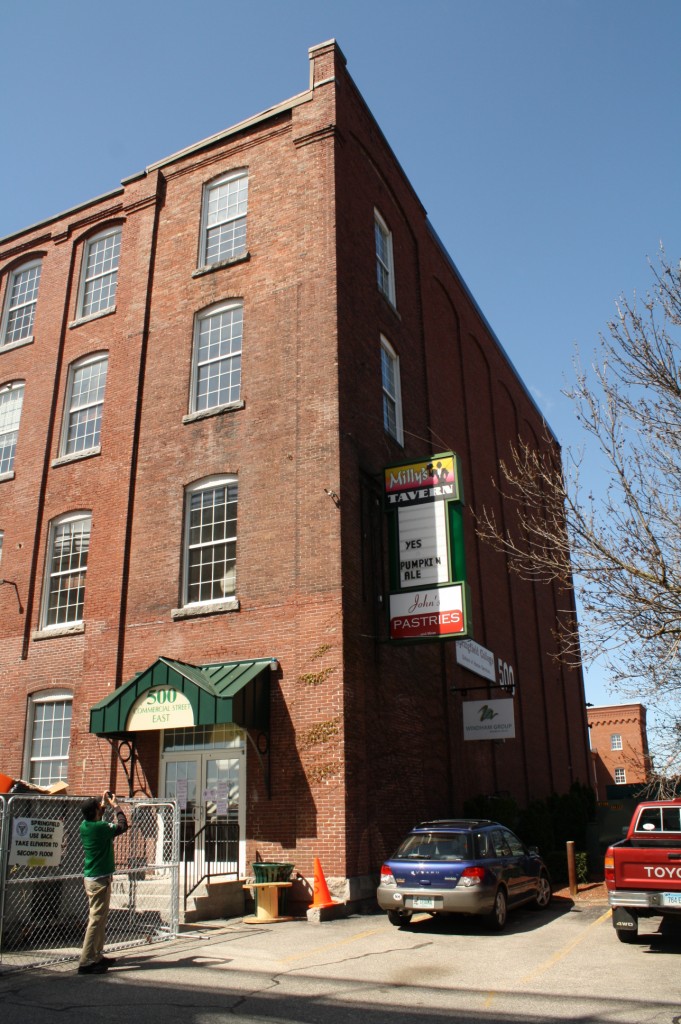 Just up the highway in Manchester, New Hampshire, the next stop of our New England adventure brought us to Milly’s Tavern, a unique brewpub and nightclub. Located upstream on the Merrimack River and down the street from Southern New Hampshire University in a redeveloped industrial waterfront, sits a three or four story brick building. Milly’s is the only known brewery/nightclub to our knowledge in the United States. This combo made us skeptical and not sure if it would be worth the stop,  but since it was such a distinct opportunity, we decided to give it a go.  As we walked into Milly’s, the first thing we noticed was a stage for entertainers to perform, and down a couple of steps into the main bar area where the house brewery sits in the open behind the bar. Milly’s has sixteen of its own beers on tap and not a single guest tap. To make up for the lack of Bud on tap for the nightclub crowd, the brewpub makes its own version called the Fisher Cat Ale. At 3.8% ABV and 15 IBU, this beer turns out to be quite a refreshing beer. Made with European Pilsner malt, pale straw in color, hopped mildly with German Hallertau, MIlly’s claims this is a low calorie beer. 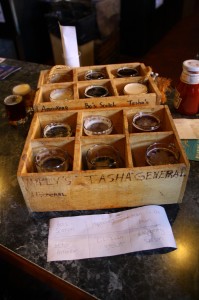 Other highlights of Milly’s included the Milly’s Pumpkin Ale (4.7% ABV 14 IBU)  brewed using fresh pumpkins supplied by a local New Hampshire farmer. This is the first time we’ve experienced a beer with a cinnamon and sugar-spiced rim. While we could have done without the extra seasoning, we still found the flavor of this beer to be very enjoyable, tasting just like a pumpkin pie.

Another noteworthy beer we tasted was Tasha’s Red Tail Ale (4.8% ABV 33 IBU,) which happens to be the reigning best seller at Milly’s.

The Manchester Mild (3.7% ABV 15.7 IBU) is an unfiltered English-style brown ale that is light in alcohol but full in malt flavor. Milly’s states this beer is what is known in the craft beer industry as a “session beer”  that is readily suited to drink in quantity during a single session. 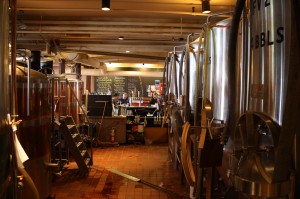 The hoppy beers at Milly’s were a bit disappointing,  but being from the Pacific NW and Beervana, this will be the case with most East Coast IPA’s.

After Milly’s, we headed north up Highway 3 to the neighboring town of Hooksett. We’d been hoping to get a tour of newly founded White Birch Brewing there, but after calling brewer Bill Herlicka, we discovered he was out of town. However, on Bill’s recommendation, we paid a visit to Bert’s Better Beers on Hooksett Road.  Here we discovered a microcosm of beer geekdom where lots of Northeastern brews were available to go. In this quaint bottle shop, more than a few hundred different bottles of craft beer were for sale by a friendly and informed staff who were far from short on passion when it came to their trade. 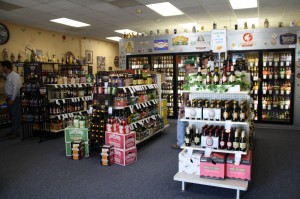 As we perused the offerings, we bantered with owner Ron Parker who pointed us towards three available White Birch varieties including a Wrigian Belgian-style Rye Ale, Bohemian Edition Tripel, and a Belgian-style Pale Ale, all in 22-ounce bottles. We also picked up a four-pack of Shipyard XXXX IPA (9.5% ABV),  a few bottles of Cisco beers (from Nantucket, Massachusetts), and a bomber of Manchester Brewing’s Over Regulated American Ale (Live Free or Die trying). 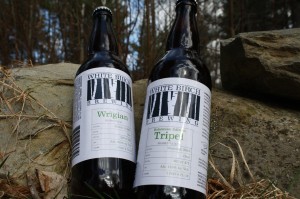 After our nice visit the Greater Manchester area, we again hit the highway heading northeast, off  to one of the most anticipated stops on our New England journey.