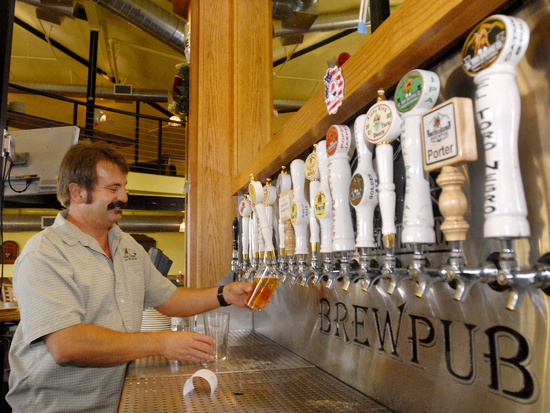 Yet another special meet the brewer event at APEX is happening on Thursday February 3 from 5-9PM. This time, El Toro Brewing from Morgan Hill, California. Brewmaster Geno Acevedo will be on hand to talk about 11 special beers that will be on tap. Here’s a list of what folks can expect to have available at Apex for this fun-filled night:

Gena’s Honey Blonde Ale Brewed with a bunch of clover honey two-row barley malt and very lightly hopped this is our lightest colored and lightest alcohol containing beer. It is named after the owners’ daughter, who is a little honey blonde. She begged to have a beer named after her since her sister, Amber, had one for so many years. 4.0% abv 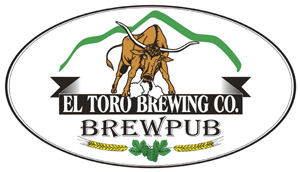 El Toro Whiskey Barrel-aged Stout This Beer is a traditional English-Styled Oatmeal Stout using 10% flaked cold rolled oats. It has rich coffee flavors with mild cocoa tones.  El Toro Negro has a smooth, mild bitterness, full body and is very drinkable. We took some of our El Toro Negro Oatmeal Stout  and aged it with charred Oak chips marinated in Jim Beam Whiskey. The aging gives the beer a subtle but distinctive complex whiskey flavor and aroma. Supply is limited on this beer. 5.5% abv

Deuce Imperial IPA Over 100 International Bitterness Units and a starting gravity of 1.074. This beer uses over 90 pounds of hops in a brew size of 400 gallons. 48 pounds alone in the dry hop stage. That’s a lot of hops! Hops are:  Columbus/Tomahawk/Zeus, Centennial, Citra, Simcoe, Summit, Cascade, and Amarillo. 8.1% abv

Poppy Jasper Amber Ale Named after a precious form of quartz indigenous to only Morgan Hill, California, this classic dark ale is smooth and refreshing. Its dark color results from the use of caramel, higher kilned dark crystal and chocolate malt. The beer’s flavor is malty and fruity with a subtle roastiness.  To finish Poppy Jasper is generously hopped with Galena, Cascade and Liberty hops for a perfectly balanced wonderfully complex character. 5.2% abv

Extra Hoppy Poppy Jasper Simcoe We take our Poppy Jasper Amber and spike a finished keg with an extra ½ pound of hops. An ankle length nylon stocking filled with the pellet hops is hung through the bunghole of a Hoff-Stevens Converted Sankey keg. Some stocking is left outside the keg. Then the keg is wooden bunged closed. This adds a boost of hops flavor. We do this with pretty much every kind of hops we get our hands on. Simcoe hops has a very distinctive resiny piney sort of kick If you are into hops, this method of hop spiking a keg will allow you to better understand the characteristics of that particular hop. Its and educational thing we do on our part for you.

El Toro Oro Golden Ale Gold Medal winner at the 1994 Great American Beer Festival for Classic English Pale Ale. And then a Bronze in 2003 for English Styled Summer Ale. This Classic English Pale Ale is delightfully refreshing medium bodied golden ale. It is moderately hopped to give the beer a smooth taste and subtle spicy/floral aroma.

William Jones Wheat Beer This beer is named after the Brewmaster’s father-in-law. It was formulated to make Bill’s “mainstream” palette happy.  Brewed with 50% wheat malt and lightly hopped William Jones Wheat Beer is smooth, light, crisp and refreshing. It is filtered for a clear honey colored pleasing appearance.  Its carbonation level is moderately high for the “mainstream” appeal yet remains quite flavorful.

Winner of the 1997 and 2006 Great American Beer Festival Gold and Silver Medals for American Wheat Beer.

A limited few kegs of these Strong ales and  Barleywines which have been brewed over the years have been squirreled away and specially aged for the specific intent of being reintroduce to the public at the Grand Opening of our new brewpub! The purpose of which would be to taste these in small amounts vertically to compare the effects of age over the years on similarly brewed strong beers. Good strong ale matures in a very unique and complex way over the years similar to aging wines. Tasting these types of beers in this way is a special treat. Hope you appreciate them as much as we do.

El Toro Yo Winter Brew Batch 1471 “Yo” Winter Brew is our Winter warmer. “Yo” is short for the nickname given to the Aztec God Xipe Totec. His nickname was Yohuallahunatzin relating to his proclivity toward Aztec beer consumption. He was also called Yoalli Tlauana meaning night drinker. The brewers of “Yo” could easily have this nickname too. Like a Poppy Jasper Amber Ale on Steroids. Dark Amber Color. With  120#/2 – 5 gallon buckets of  Clover Honey added to the mash to pump up the starting gravity. 9.87% abv

Paulo’s  ol’ #56 Wheat Wine Brewed with 15% wheat malt and a lot of 2-row malt. This strong beer was fermented with the San Francisco Lager Yeast at 54 degrees and lightly hopped and dry. 8.8% abv.