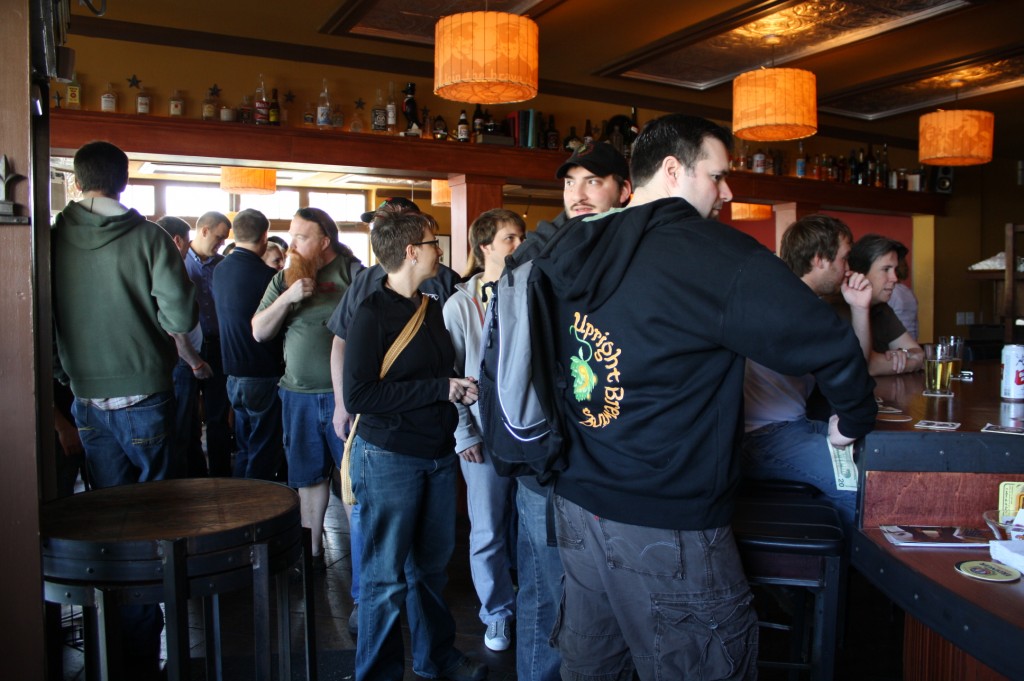 Saturday March 20, 2010 marked the first day of spring in the Northern Hemisphere, and what better way to celebrate the summation of winter than to get outdoors and enjoy the sun over a number of tasty brews. Brewpublic’s first ever BrewPubliCrawl, also Oregon’s first ever meet-the-brewer pubcrawl, featured droves of thirsty craft beer enthusiasts jaunting about Southeast Division Street, where at four stop, eight brewers and their beers were front and center.

In addition to this festive event that also happened to take place on the first 70 degree day of the year, another pubcrawl would take place on the North Side of town. The Krakow Cafe off North Interstate Avenue put together a public transportation crawl, also doubling as a Bock Fest.

Elsewhere in North America, Brewpublic’s Quebec correspondent Marc Demeule found himself at a crawl of his own on the streets of Montreal.

I couldn’t take part in the BrewPubliCrawl, but I joined other beer geeks in Montréal for a special brewery tour, managed by Bièropholie. This first event took place at Le Cheval Blanc. For the occasion, two beers were put on cask. We could taste a Nugget IPA, a light amber brew with a prominent presence of herbaceous aroma with a good herbal taste; a Russian Imperial Stout, with a coffee domination. The brewer Éloi Deit opened us the new installations. In fact, the brewery has been moved from the tiny basement to the first floor which is more convenient. It also allows customers to see the brewing process.

Basically, Le Cheval Blanc‘s brewing system has a 1000 liter capacity and the brewery owns five fermenters. There is room left for another one as well. For 2010, the brewer expects close to 90 brewing sessions. 8 taps and 2 casks pour regular beers and a rotation of ± 70 others recipes. Everybody can find his preferred brew here. Some projects do include the use of Brettanomyces yeasts in a saison beer and an India Pale Ale  including Warrior hops. Locally grown hops will be also used in the future. I need the address of that local hops grower, Éloi.

Thanks to the tour manager. We are ready for another one.