On a recent trip to the North Puget Sound area, I decided to make a pit stop at a few of the great microbreweries in the region the the goal of showcasing some not-so-far-away craft brewers that may get lost or overlooked amid plethora of great breweries the Pacific Northwest has to offer. 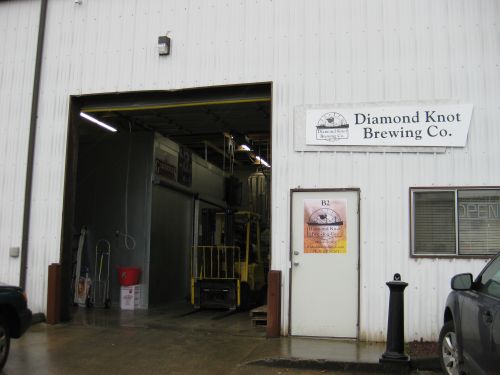 Destination #1:   Diamond Knot Brewing Company,  Mukilteo, WA.   For those of you who are not familiar with Mukilteo, it  is a beautiful area (and town) on Puget Sound just southwest of the city of Everett.  There are actually four Diamond Knot establishments in this area, but I headed straight to the source:  their 20-barrel production brewery and taproom.   In addition to the current brewing facility and their original brewpub, located across the street from the Mukilteo ferry terminal  Only a couple miles a way across from the ferry terminal is their original brewpub which was opened in 1993 by the original owner and founder Brian Sollenberger.   They have also added a family friendly restaurant in Old Town Mukilteo, as well as a restaurant on nearby Camano Island.

My visit to Diamond Knot brewing facility was great right from the start.  The hospitable Bob Maphet, president of Diamond Knot,  was on site and generous enough to give me a full tour loaded with a historical perspective of Diamond Knot and the craft beer industry of the area.  Bob had still been a full time Boeing employee while managing Diamond Knot with Brian until 2007.   With the unfortunate passing of Brian that year Bob took over full managing duty and has since retired from Boeing.  Bob shared a few stories about Brian and their brews as he spoke fondly of his late cohort.  One of my favorites was how they arrived at the name of  their  “Slane’s Irish Red Ale.”  It’s named after Brian’s grandfather Slane, who was a brewer at the original Pabst in Milwaukee, Wisconsin.  Quite fitting I thought. 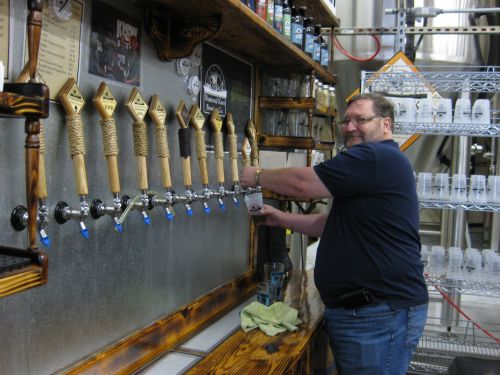 Following a brewery tour, Bob directed me to the tap room area for some tasting.  With 12 different taps on hand there was no

shortage of choices.  My first choice, and usually typical for me, is for anything barrel aged.  I was in luck as they had a bourbon barrel aged version of the Ho! Ho!, their seasonal Winter beer.  Needless to say it was delicious!  But before going straight to a big beer, I was intrigued by a different brew in the pale ale style, a beer entitled  “Whip.”   Whip is a collaboration between Diamond Knot and Queensrÿche guitarist Michael Wilton.  How did they come up with the name you ask?  Michael’s nickname of course!  Whip is a very well balanced pale with some floral notes and additional aromatics you might not normally find in a traditional pale.  It remains very drinkable, yet the subtle touch of bitterness reminds you that it’s got a little oomph to it.  After a refreshing and familiar sample of  their IPA (Bob’s current and number one choice for his home tap) and their Industrial IPA , I moved on to an ever enticing brew that was only available on draft at the time, the Reiesterbrau.  The Reiesterbrau is in the olde ale style, very strong with a sweet whiskey-like finish.  On a cold and drizzly day, Reiesterbrau was warming and pleasant, one of those brews you’d like to just relax with for the rest of the afternoon. 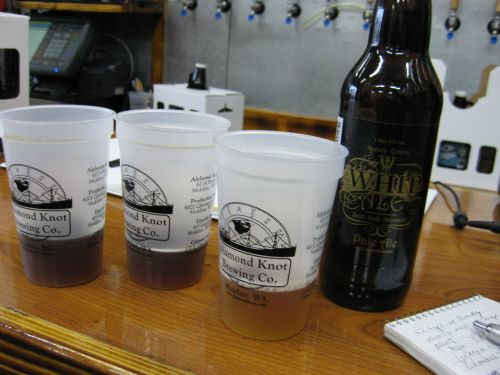 Given their three different types of locations,  Diamond Knot is able to accommodate a variety of groups and customers, whether you’re a beer enthusiast eager to try the latest,  fresh brew straight from the tank or the quiet beer-lover who wants to relax with a quality pint, a good meal, and an amazing view of Puget Sound.  Despite having them having  their bases covered, especially in Mulkiteo, there may be plans for expansion in their future.  If you’re in the Everett-area, Diamond Knot is definitely worth a visit!  Keep your eye out for their 22’s in area stores, and if you’re lucky, you’ll stumble upon their beer on draft at finer drinking establishments. 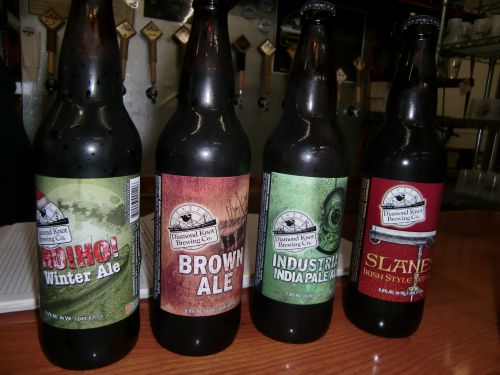