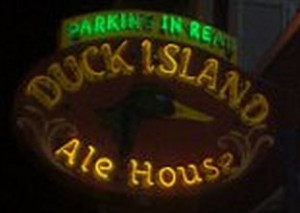 Duck Island Saloon is an unassuming haven for  unpretentious beer drinkers who demand stellar selection.  Just a stone’s thrown down Aurora Avenue from the grandiose Uber Tavern, Duck Island has the feel of a blue collar dive bar on the surface, that is until you check out the taps list.  Around 25 craft and import beers on tap, including more than a handful of Belgians makes Duck Island not just one of Seattle’s best beer spots, but it rivals some of the country’s best.  A long list of bottled beers make up a book at the bar in case something on draught doesn’t tickle your fancy.  The small space houses a pool table and pinball to the side as well as a jukebox featuring some of Gen X’s favorite punk and metal tunes. Music like Mother Love Bone, Social Distortion, Dead Kennedies, and The Misfits are churning out of the speakers while you quaff in an atmosphere that can probably only hold one person per tapline.  From the ceiling hangs hundreds of past and future handles that have captured the imagination and palate of worthy clientele. On our recent trip to Seattle, we were tried a couple beers at Duck Island we had never had before. 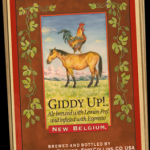 New Belgium Giddy Up!: With a stimulating nose of freshly ground coffee, this beer possessed a pale amber body unlike most java brews.  Under a thick fluffy off-white head, a gritty, chewy morning coffee flavor lingered.  With bold acidity and a richmalt presence, the Giddy Up! certainly lives up to its name.  Boo yah! 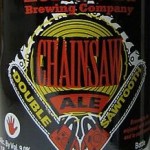 Left Hand Chainsaw Ale: This doubled version of the Left Hand Sawtooth ESB poured a foggy yet bright amber body with a mild white clinging head and left lots of curtaining on the glass.  A sticky, hoppy rich, candy nose is a clear indicator that this is a full-bodied, aggressive brew.  Almost bitter in the finish, the nearly cloying grit of this beer cuts through the palate leaving some chocolaty residuals.  A delicious nightcap. 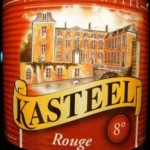 Kasteel Rouge: Also known as Kasteel Kriek, this fruit beer from Ingelmunster, Belgium was served in a handsome Kasteel stemwear.  Sweet and delicious, the dark ruby, barely translucent body of this beer held a small filmy head.  A full-on medicinal cherry syrup nose was a preamble to its nearly vinous flare.  The underlying malt sweetness pairs with the Rouge’s bold fruit element.  A great beer that is fruity without being phony.  Mmmm…

The fact that Duck Island Saloon flies below the radar makes it a special destination, sort of a diamond in the rough if you will.  Next time you are in Seattle, make sure to stop by and see for yourself.  You may never want to leave.