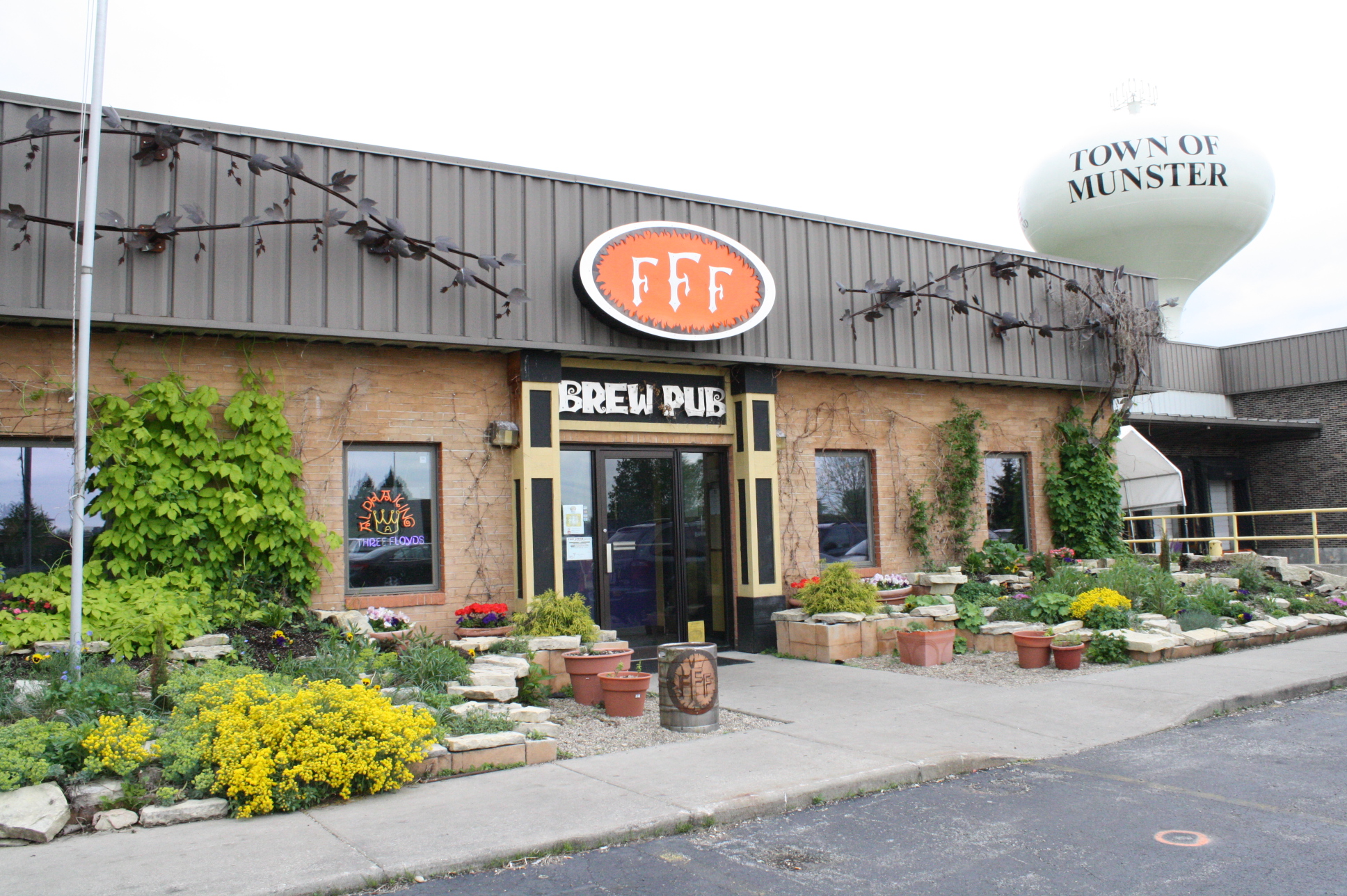 After our first night in Chicago, we were anxious to get our beer hunting underway. As scheduled, we had an appointment with the kind of craft beer that dreams are made of. Munster, Indiana is not the kind of town you’d expect to find one of the country’s most highly regarded craft breweries, but it is. Three Floyds Brewing makes

some beers including a abysmally chocolate brew called Dark Lord, and an array of hoppy treats like Dreadnaught Imperial IPA and Alpha King pale ale.  Websites like Beer Advocate and RateBeer.com have listed Three Floyds as one of the best breweries in the world. We have tried a handful of theri beers through beer trades and friends who had gotten their hands on some, but this was our chance to get to the heart of the matter where the beer is actually concocted.

We arrived at Three Floyds in an industrial park off the main drag of Muster. In the

background a giant water tower with “Munster” written on it loomed over the flat horizon from behind the brewery. The brewpub entrance was adorned with a two-sided bronze sculpture of the Alpha King and Queen with tidily landscaped flowered and a front trellis growing hops. A big “FFF” sign hung over the front entrance. We knew we were in the right place. As we approached the front door, we met a man who informed us that the tour of the brewery would promptly start at 3 o’clock, so if we were to get any beer, we needed to be finished, cashed out and back out front a 3:00PM sharp. With only about ten minutes until the tour began, I entered the pub and gawked at the colorful interior with large labels of the various beers they offered over the years. The staff were adorned with many colorful tattoos indicative of the artwork hanging on the walls. It was like a psychedelic page out of Willy Wonka’s legacy and I was digging it. 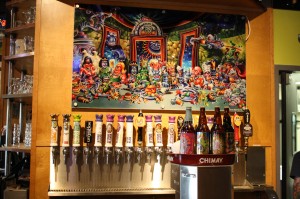 We were lined up on the side of the building along with about 40 other zealots and enthusiasts to get a glimpse at brewing facility and hopefully some insight into the magestic aura of this storied brewhouse. To be honest, the tour was a bit underwhelming and drab. In fact, I would have to say it was one of the lamest beer tours I

have ever been on. A rudimentary 101 lesson in what beer is and how it is made may have been useful to the Nascar and Budweiser acket clad groups with us, but damnit, we’re beer geeks and we were hoping for something more. Not secret samples of Dark Lord or anything. In fact, we couldn’t wait to bolt back to the brewpub and get some food and start libating. I asked our tatted tour guide, Travis, who identified himself as the company’s packaging manager, when asked about hops, said “they come from the Pacific Northwest.” I asked him who their hop contract was with and he said “I don’t know.  Hop Union I guess.” I mean, for producing some of the most hoppily hyped beers in the country if not the world, I was really hoping for more. 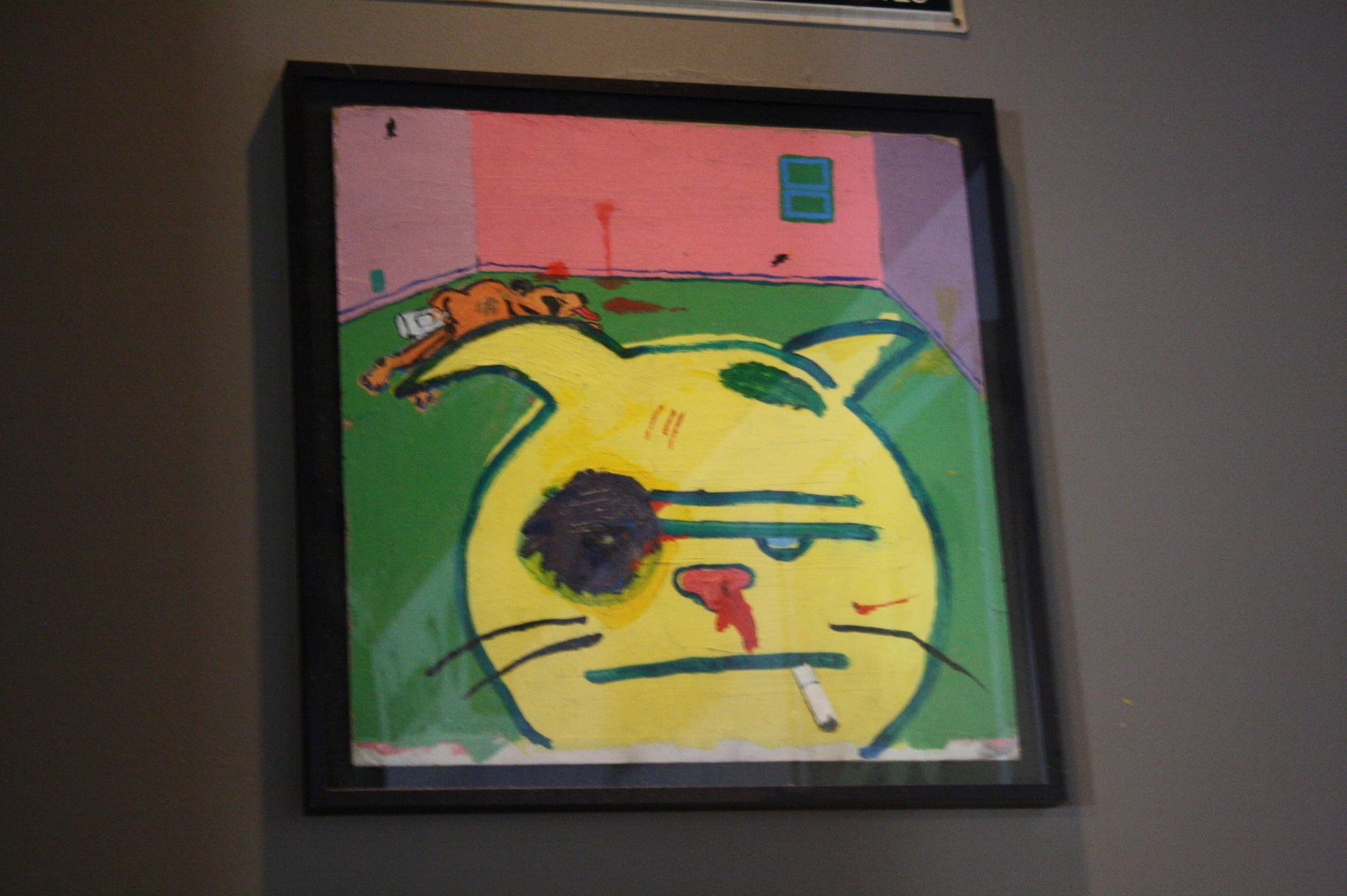 Back to the brewpub, we ordered up a few rounds of imperial pints including Rabbid Rabbit, a Franco-Belgian spiced ale, Robert the Bruce, a Scottish ale, Gumball Head, a florally hopped wheat ale, the Dortmunder Einfall, a dry crisp lager, the Alpha King hoppy pale, a snifter of Hyena, a phenolic Belgian-styled pale with American hops and Chouffe yeast, and a glass of the Dreadnaught. Sadly two of the most luring options on the beer menu were gone by the time we arrived. A Bavarian-style Dunkle weizenbock called Banana Split 7″ and a porter that was a small beer version of the Dark Lord called Slave Princess were both ixnay to our dismay. 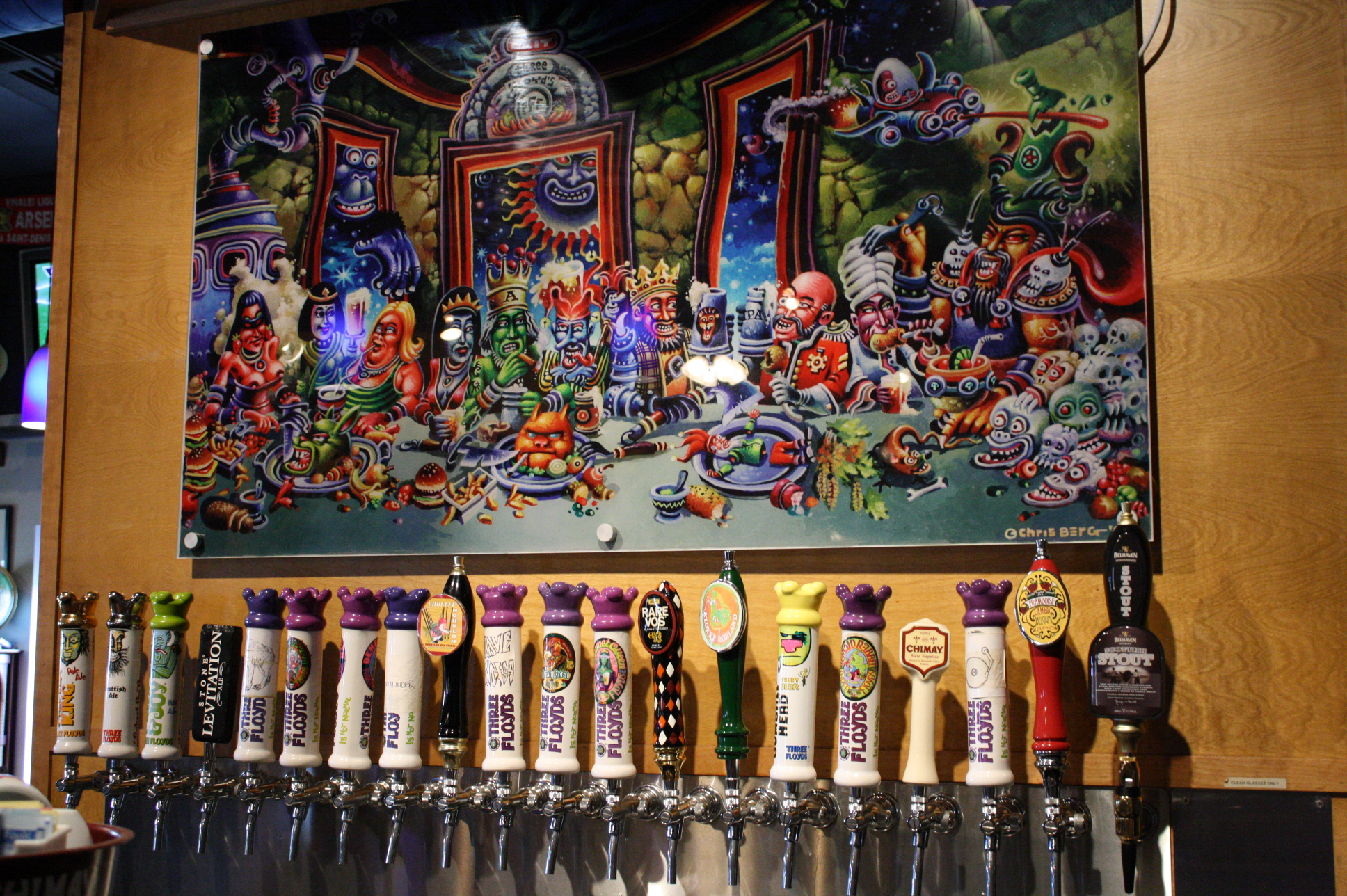 It may sound like the trip to Three Floyds was a bit disappointing, but it really wasn’t. It is just that being from Portland you set the bar high when it comes to beer. In addition, in the Pacific Northwest, you can count on at least one vegetarian option on the menu outside of a bland salad with no vegetables and fries. Plus, the hype that preceded Three Floyds made it so that a letdown to some extent was inevitable. For where it is located, it most certainly is the best brewery bar none for miles and miles.  And, if I was ever subjegated to live in this area, I’d most certainly be getting my Three Floyds on on a regular. The staff are friendly and the music playing in the pub is great. If you are ever within an hour’s drive and consider yourself a beer geek, you’d be fooling not to check this place off your bucket list. 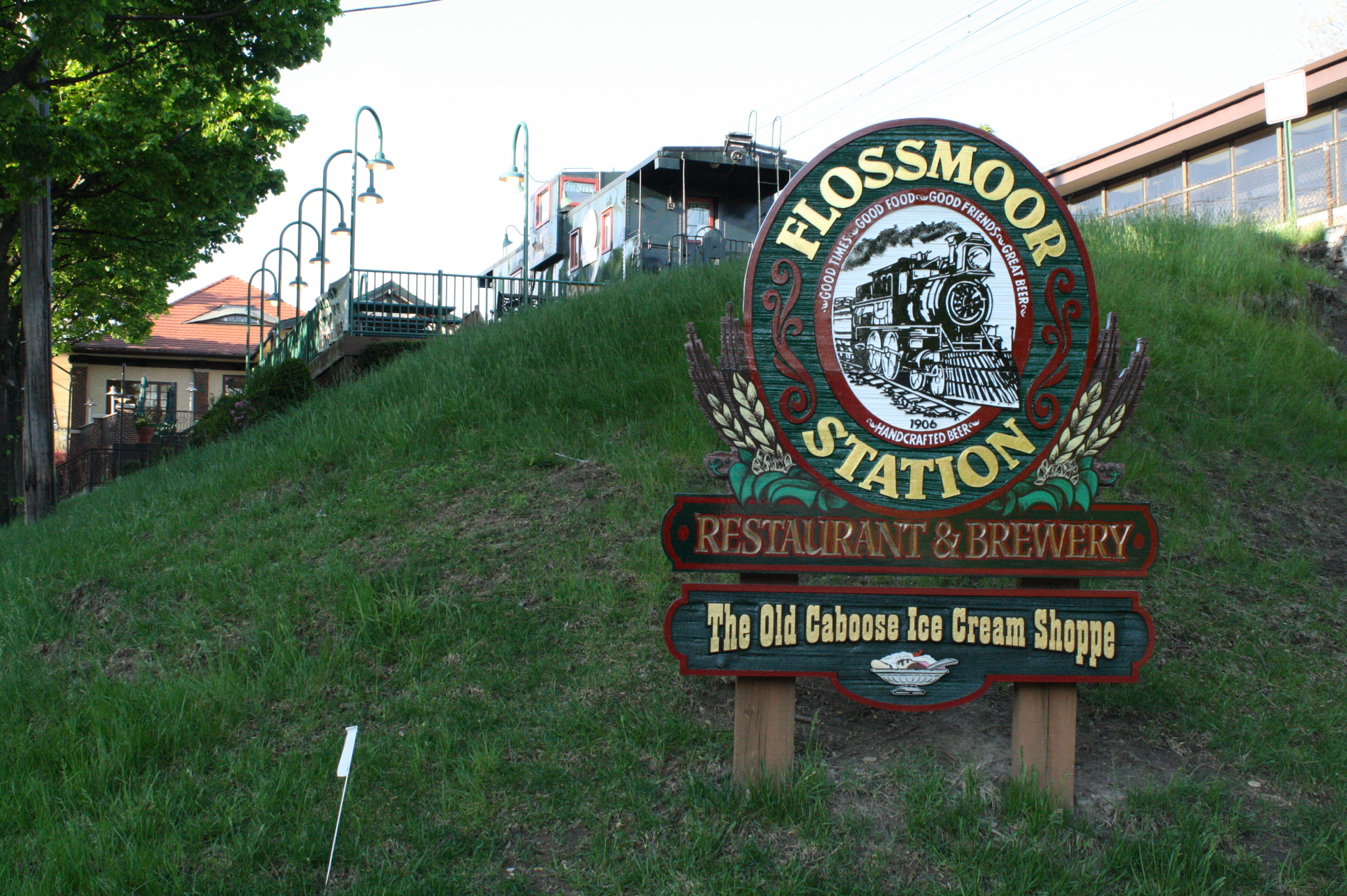 After many beers and little food, we hit the road back north to Illinois for one final beer destination of the day. 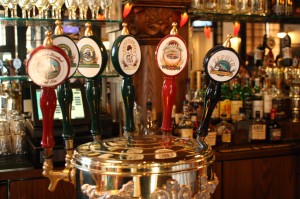 Flossmoor Station is a pristine little brewpub situated in a pristine little village right off the Metra train line. Known for their variety of beer styles that have won award after award including 2006 Best Small Brewpub and Brewpub Brewer in North America at the Great American Beer Festival.  It should be noted that former brewmaster Matt Van Wyk recently left Flossmoor to assume similar duties at Eugene’s Oakshire Brewing. With several medals adorning the interior, the brewery’s commitment to excellence is evident in a sip of any of several beers on tap. I began with a snifter of White Lady Imperial Belgian Wit, a flavorfully glowing orange pour of heaven. At 9.2% ABV, this was the perfect quaffer-astringent, yeasty, and perfect to cut through my dulled 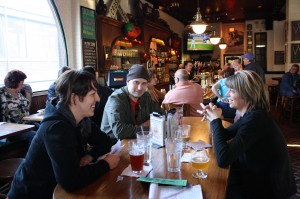 senses. I was also fortunate enough to get my palate involved with Flossmoor’s Fairwell Pale, Killer Kapowski Baltic-style Porter, and Chessie Cherry Wheat. One other beer of note was the Pullman Nut Brown Ale, a dark brown-amber brew with a chocolate dry nutty body and a roasty robust finish. Excellent! Despite waiting forty minutes for an order of onion rings and one particularly rude waitress, the experience was great. The manager came by to talk about the beer with us and even covered our food and drinks. Thank goodness I had a designated driver, or I might have found myself outside catching the next train back to Chicago.