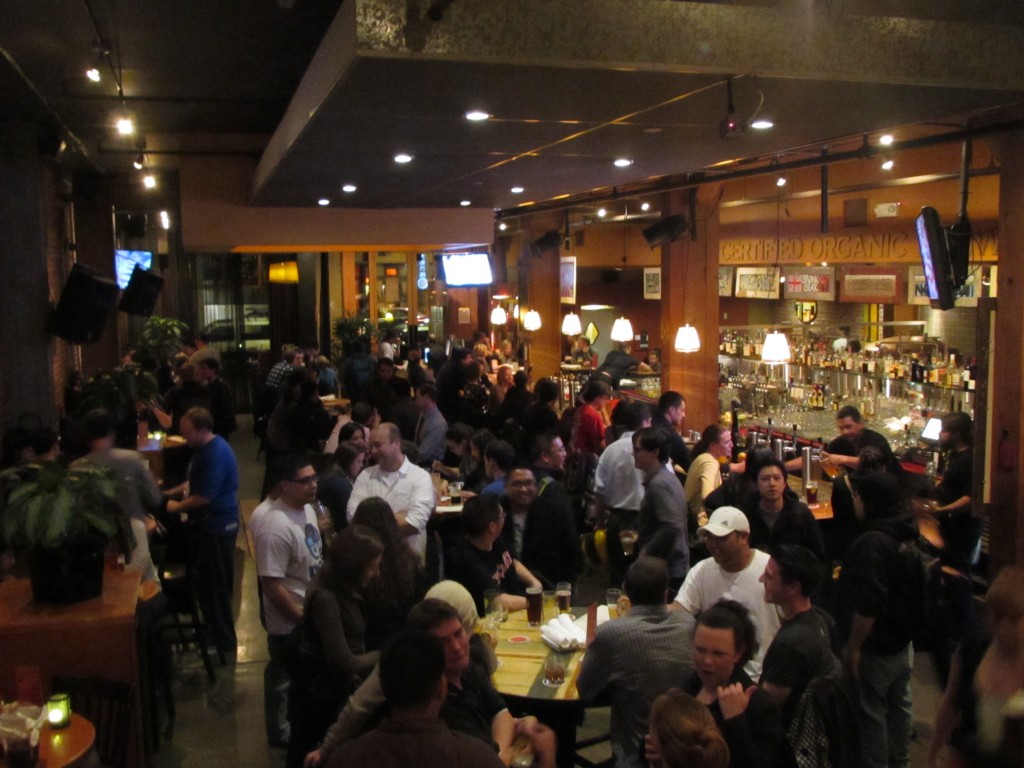 A long weekend away in the San Francisco Bay Area recharged our beer batteries while allowing us to soak up some much needed sunshine.

Thursday involved trekking out the PDX International in order to fly out to Oakland for a much needed getaway. Before departing, it was necessary to hit up Laurelwood’s airport pub for a a bowl of chili and a delicious pint of the resurrected Workhorse IPA. Not long after boarding a small Alaskan Airlines plane decked out in Oregon Ducks design, the stewardess offered up complimentary pours of Full Sail’s Black Session Lager. After a few cups of this delicious nectar, the landing gear dropped and we touched down at our destination: Oakland International Airport. 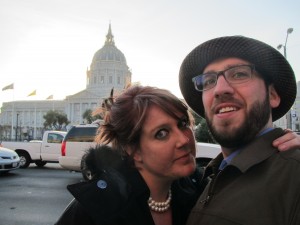 aka Ashley Routson came by to pick me up and immediately our Bay Area beer excursions were well underway. Ashley is an expert in all things beer (not to mention wine and mixology), and her familiarity with the Bay Area’s notable craft scene would prove to be an invaluable tool for navigating the ins and outs of all things beverage related. 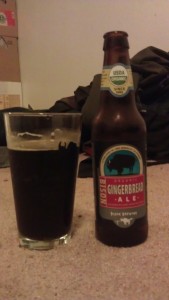 Back to Ashley’s abode in Berkeley, we immediately traded beers, and I enjoyed my first Bay Area brew, an appropo bottle of Bison Gingerbread Ale. Ashley works for Bison as their “director of awesomeness”, a title well deserved.

After a few brews and sampling some of Ashley’s signature beer cocktails. The evening was spent unwinding with many delicious tipples and tasty food. It was a restful evening before a busy Friday would unfold.

On Friday we headed to BART (Bay Area Rapid Transit) in order to make our way into the City (San Francisco). The weather was accommodating; what January afforded us here was simply glorious, and would prove to remain so throughout the weekend. It was nice to escape the gray drear and drizzle of the Pacific Northwest, and trade it in for some California Sun (insert “California Dreaming” music by The Mamas & the Papas here).

Once we emerged from beneath the bowels of the city, the glow of a low set sun immediately energized me and made exploration of this fair city a most welcoming experience. First stop: City Beer Store. Located in the lower Mission district of the city, City Beer Store, SF’s best option for geek-oriented bottles, and a spot we’d enjoyed perusing through before, recently expanded to feature an extensive taproom on the adjacent east side. Additional cooler and seating was added to the mix giving City Beer Store a much more spacious feel. Noticeably, the prices at City Beer Store were rather steep, but this is understandable considering that everything in San Francisco is spendy. On tap we enjoyed glasses of regionally brewed beers including Russian River IPA (a different beer than their better known Blind Pig IPA) and Moonlight Brewing’s Death and Taxes Black Lager. 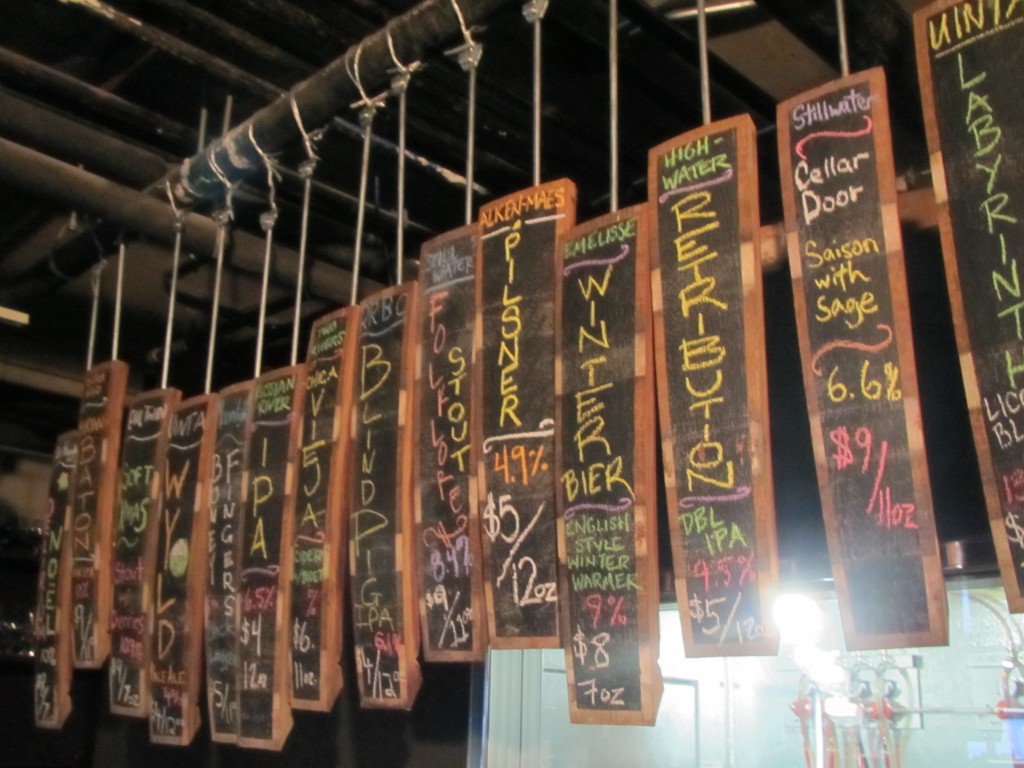 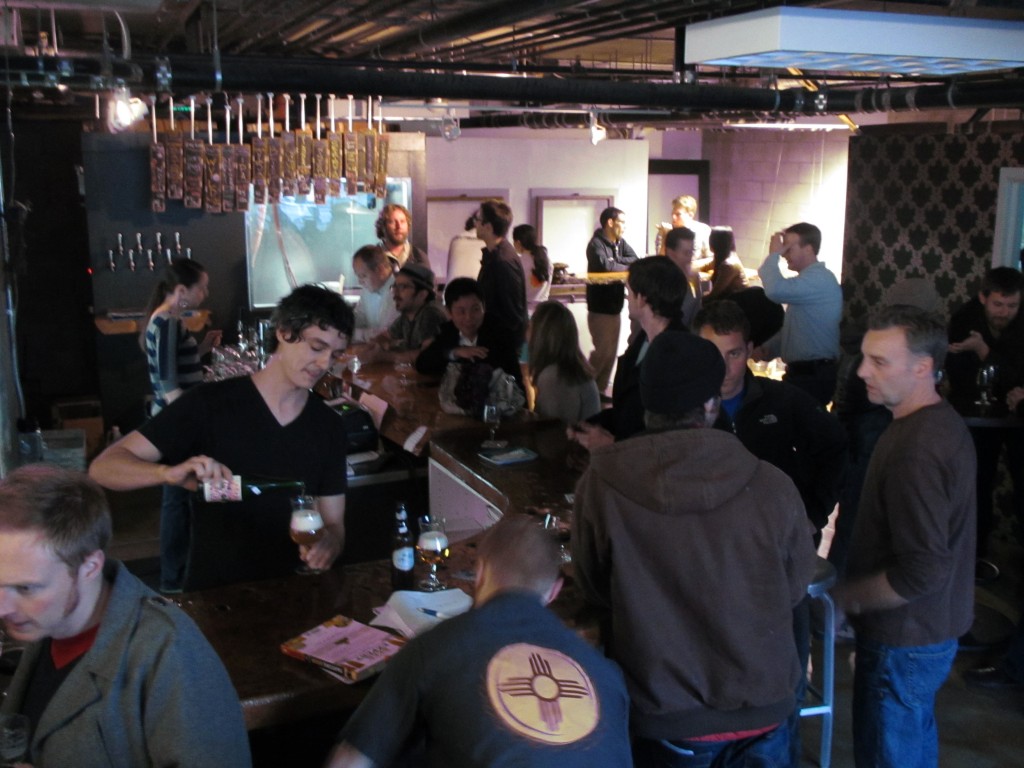 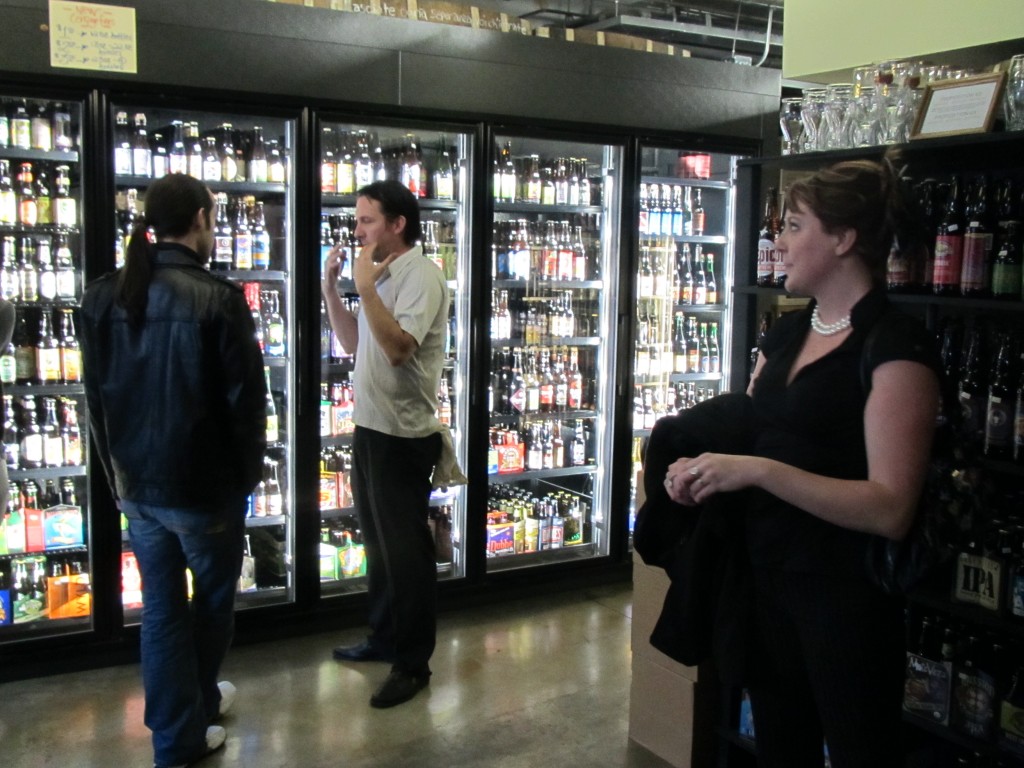 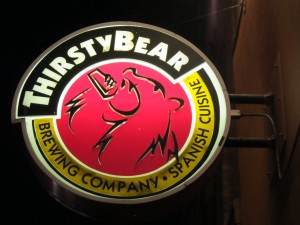 After our stop at City Beer Store, we headed over to the nearby Thirsty Bear Brewing Company. Offering a vast assortment of house-brewed ales and lagers, the formidable and spacious pub featured a few notable barrel-aged seasonals on tap. Seventh Stave was a dark ale aged in American oak bourbon barrels filled with figs & raisins. Also from the barrel was a sweeter and lighter colored Winter Stave, a cranberry-infused Belgian-style golden ale. Our friendly server also allowed us samples of the Bear’s brown ale with rose hips, drawn from a firkin. 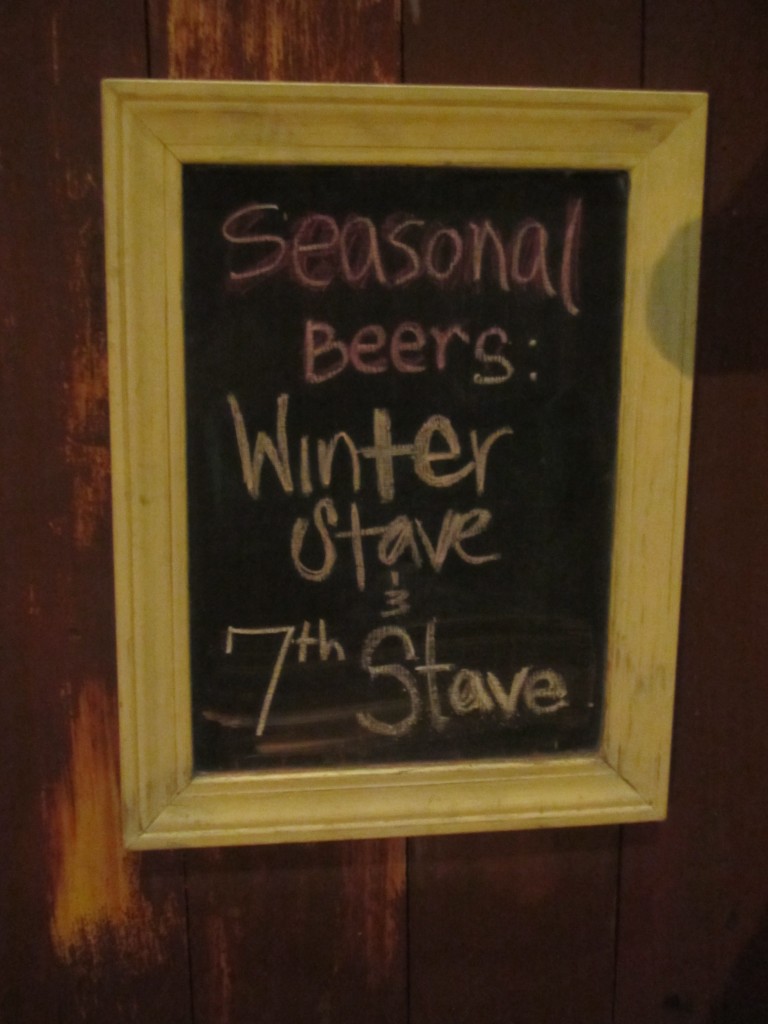 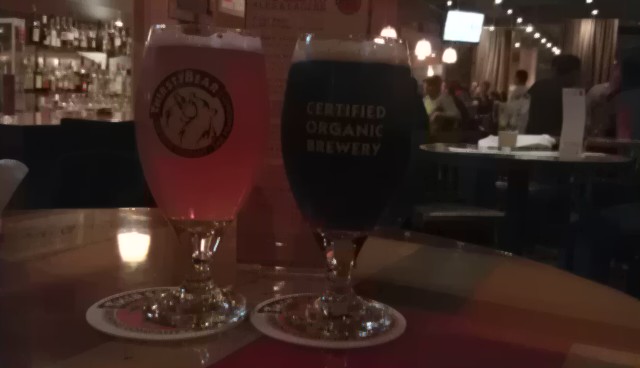 The sun set early, as we were still in the throes of winter, so we headed back across to the East Bay. A stop in downtown Oakland was in order. You see, this is where one of the region’s best craft beer destinations lies. Beer Revolution houses a wide selection of choice bottled brews as well as a bad ass rotating selection of draught craft brews from near and far. 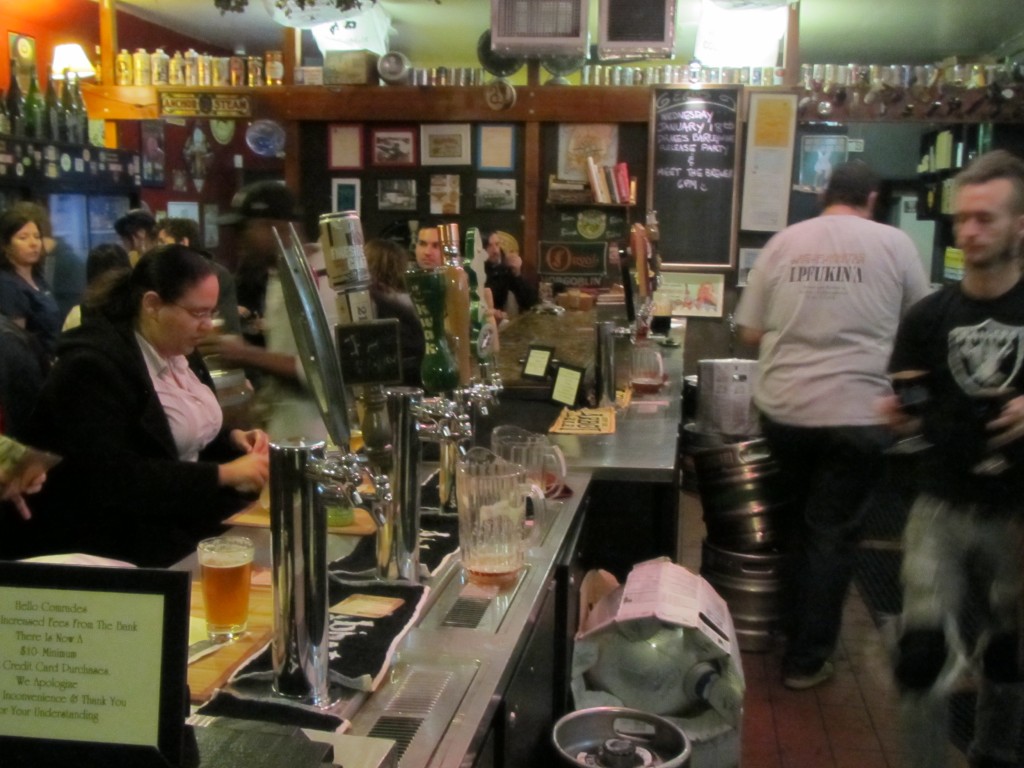 Beer Revolution has a punk rock atmosphere with many of the beertenders attired in bullet belts, spikes, and chains. The service is great, the staff is knowledgeable, and for the area, the prices are quite affordable. As a bonus, most of the bottled beer is kept in refrigerators to further ensure freshness.  And while the Revolution doesn’t serve its own food, they welcome outside eats to be brought in, such as  the delicious Southern dining from the adjacent Souley Vegan. 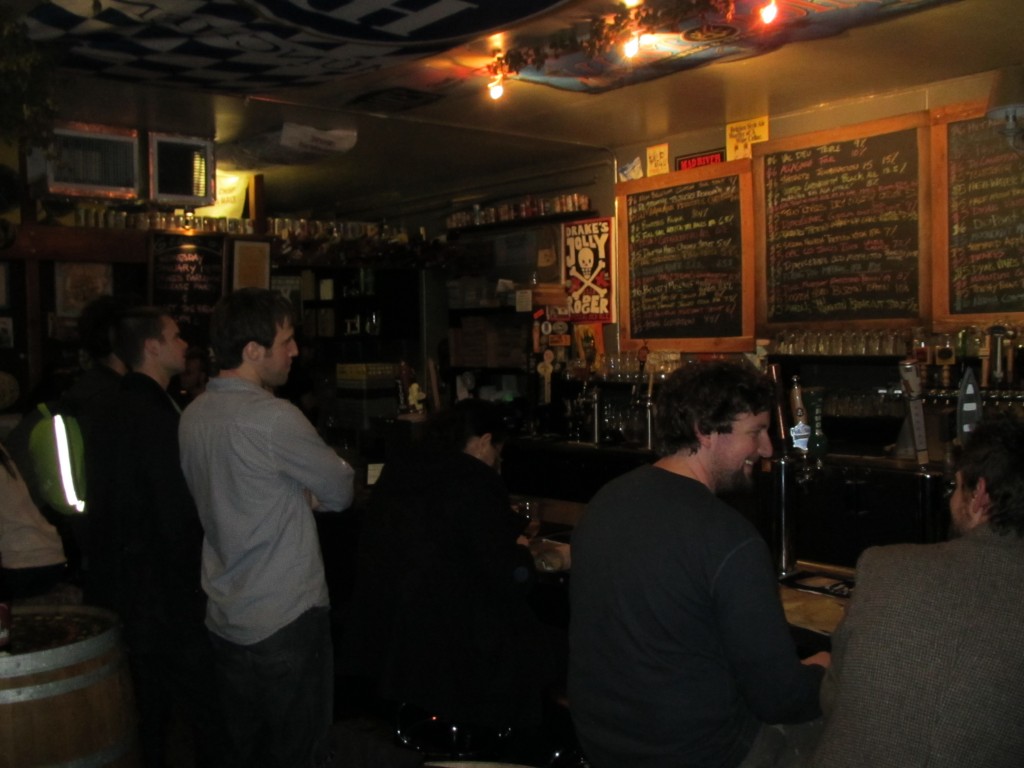 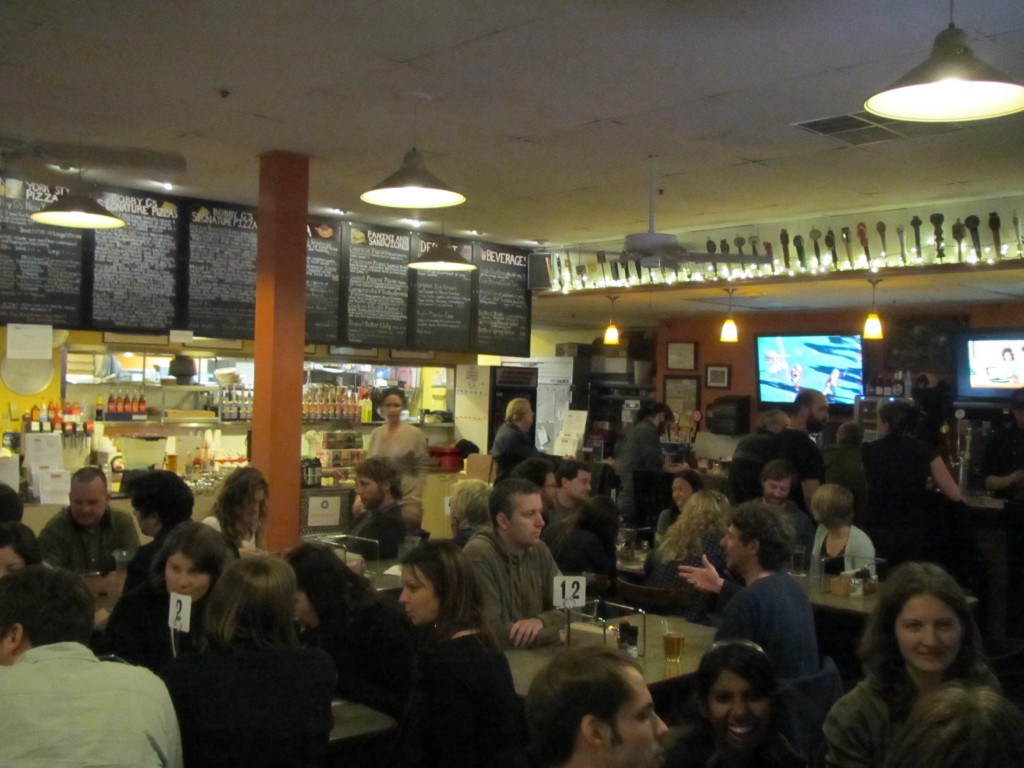 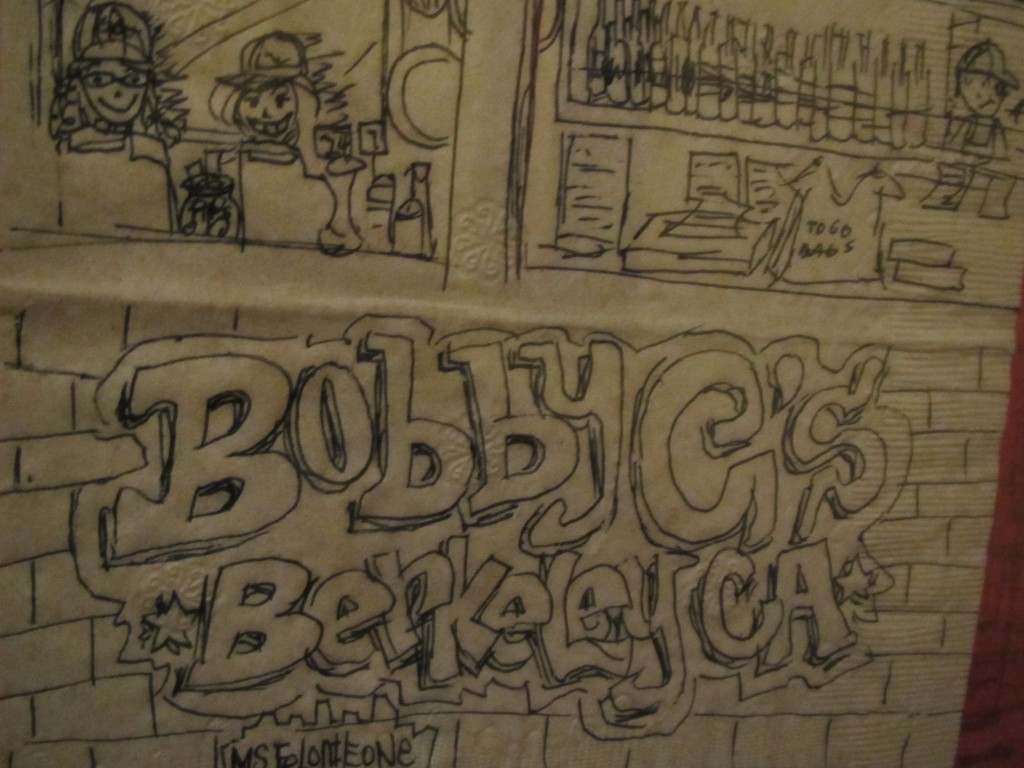 Saturday was a special day in which we headed north into the Napa Valley. Into the heart of California’s wine country, we pursued the only choice craft beer. Before departing from Berkeley, we stocked up with bottles of grubbing brews from Ledger’s Liquors, a hidden gem of a destination in the East Bay. Here we found Stone Vertical Epic 10-10-10, Allagash/De La Senne “Very Spéciale Belge” collaboration, Brasserie de Silly S.A. Pink Killer (a Belgian beer brewed with spices and pink grapefruit juice), and many more. A Ledger’s we were also able to score some spirits for beer cocktails. 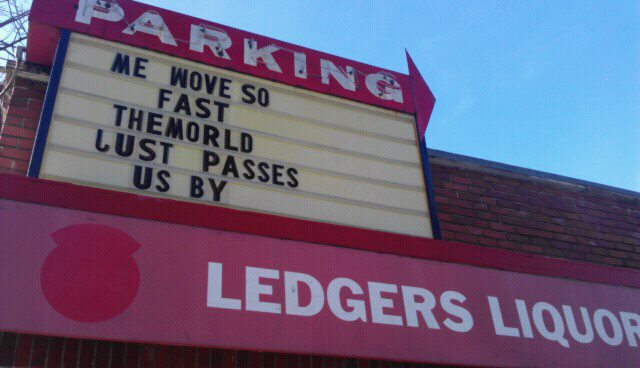 The sun was shining bright on this warm January day. We were off to Napa…