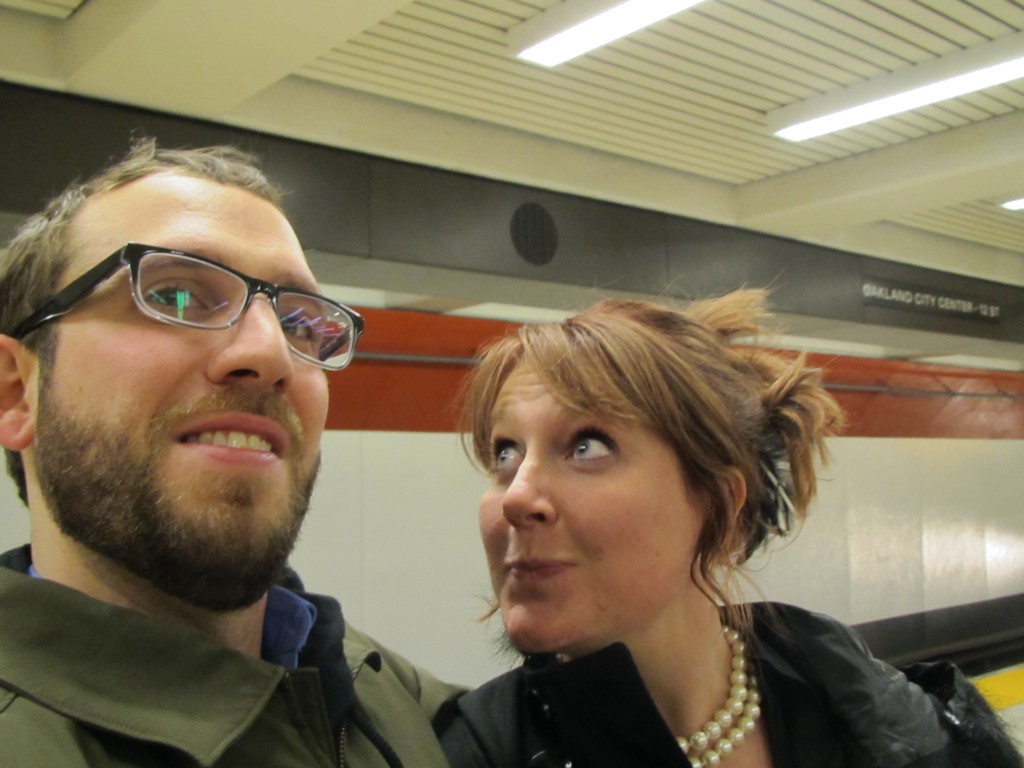 The weekend was wickedly winning as we welcomed The Beer Wench aka Ashley Routson to the Pacific Northwest. This was her third visit to Portland and there was still many great beer spots which she had not yet been to, so we had to try and knock these out. Granted, hitting up all the best Portland craft beer bars is somewhat of a daunting task that requires an intense commitment. But, we knew it was imperative to at least get a few of the essentials out of the way. Ashley’s trip was to be brief – only 36 hours in the Portland area, so every minute had to count. 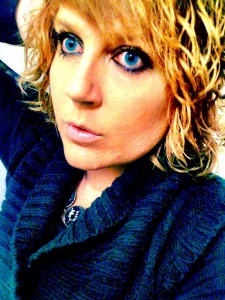 First, let us preface the telling of our adventures with more about Ashley. Known widely in the craft beer world as The Beer Wench, she is first and foremost a wine sommelier with extensive knowledge of the many tiers of the craft beverage world. She has worked on many levels within the industry from bar managing, tap crafting, event coordinating, and product inventory to writing her world renowned “Drink with the Wench” website and more recently her attention-grabbing and palate wowing “BeerMixology” site that tackles the emerging trend of beer cocktails. Perhaps most impressive about Ashley is that on top of all this, she also works for Bison Brewing as their official “Director of Awesomeness”, a title well deserved. Her presence is felt vertically integrated throughout the entire brewery from the most simple and essential of tasks to those most complex and labor intensive. She has even helped to brew beers such as the popular seasonal Saison de Wench that will be released again soon.

So, as you can imagine, this wasn’t just any beer geek that we were striving to entertain. Our journey logically began at our favorite craft beer spot in Portland, Saraveza Bottle Shop & Pasty Tavern. Early on a Saturday afternoon, the atmosphere was rather subdued, but this was fine with us. Beertender Kate Vincent served up a wonderful 5-beer sampler that consisted of  four unique and distinct regional beers: Logsdon Farmhouse Seizoen Bretta, Cascade Dark Days Cascadian Dark Ale, Walking Man Homo Erectus Imperial India Pale Ale, Breakside Aztec Chocolate and Chili Barleywine, as well as an obvious choice from Northern California, Russian River Consecration, a blended American Wild Ale brewed with Currants. Shortly after ordering our  sampler, there was a Jonathan the Younger sighting from across the pub. The popular beertender come manager, Jonathan Carmean, is a popular and loveable figure in the Northwest craft beer scene, so running into him was an added bonus. 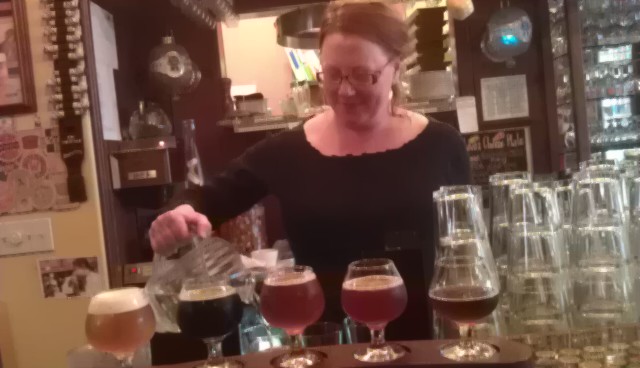 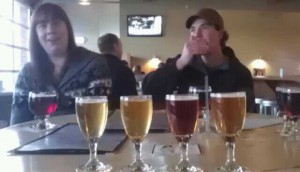 After our brief stint at Saraveza, we hopped a bus to Southeast Portland where, Ashley was introduced to the wonderful world of Northwest Sours (sorry, Matt, I used it as a noun) at the venerable and drool-inducing Cascade Brewing Barrel House. Here we met up with some of our Vancouver, Washington beer friends, referred to often as Van Crouvians, the couple known widely as Ryan and Jennifer (Ryan Hargrave and Jennifer Tierney). Fortunate for us, there was still a full flight of the “4 Goses of the Apuckerlips” available to sample. Other delectables included a Strawberry II and Filbert direct from the barrel, as well as Sang Royal and Nightfall Blackberry Ale). The illustrious Amber “Beer” King was our gracious host. While in the neighborhood, we took full advantage of our close proximity to a multitude of other key craft brew destinations.

The Green Dragon Pub and Bistro was rather subdued when we rolled in. It was a one-and-done deal for us as the lovely and talented Kat Belveal made a rare day shift appearance and served us up two wonderful Portland beers: Laurelwood Moose & Squirrel Imperial Stout and Hopworks Urban Brewery What The Helles? Lager. Both touching upon opposite ends of the style spectrum for beer, each offered its own refreshing personality that helped us to push forth further south to our next stop, The Common Brewery. 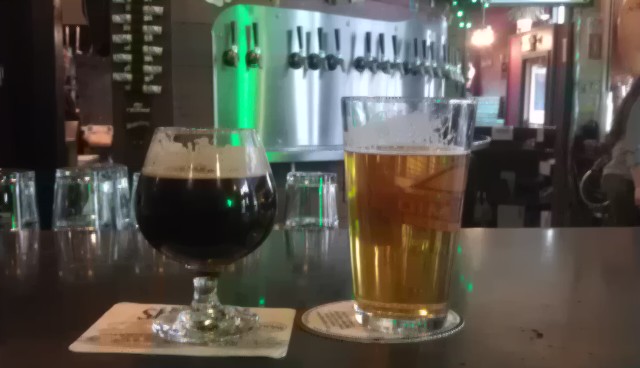 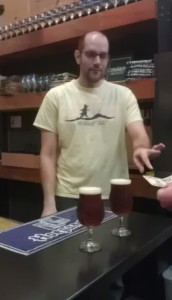 Recently opened to the public, The Commons is open on Fridays and Saturdays, offering a kicked back ambiance situated amidst racks of barrels in a cozy spacy accented by a lofty ceiling. Brewers Mike Wright and Sean Burke were in house, as was beerkeep and brewski guru Josh Grgas. It was a treat to also run into Brewvana Brewery Tours founder Ashley Rose Salvitti and her partner Jason Goodard. After sampling a few of The Commons most complex ventures of late, we settled in at The BeerMongers where a posse of friends had gathered. Brother Mario De Ieso was in the house decked out in full New England Patriots garb and sipping on a can of Fort George Cavatica Stout. John Foyston of the Oregonian’s The Beer Here was here at his home away from home sipping on a signature Anchor Steam Beer while BeerMonger #1 Sean Campbell made everyone feel right at home. The BeerMongers is a wonderful gathering of friends and affordable craft beer that is wisely curated by the staff that is led by the aforementioned Grgas. On this night, we were to catch the NFL divisional playoff matchup between our beloved New England Patriots and the Denver Broncos. It would prove to be a winning night as the Pats stomped the Donkeys 45-10. 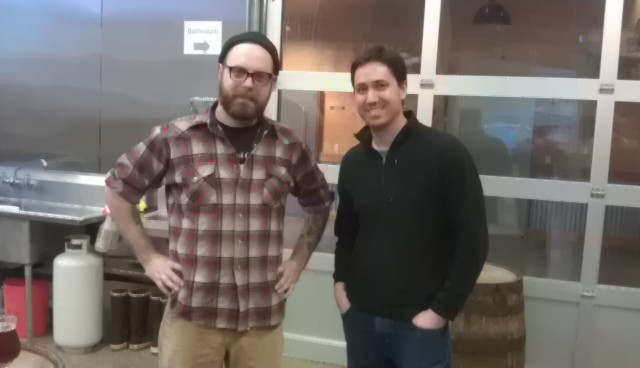 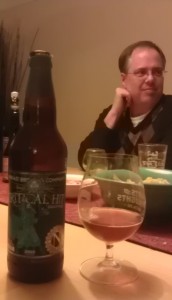 Our evening ended across the river in Vancouver, WA where our friends Dave and Arlene Nunez were in the house doling out many luscious malted libations at By The Bottle. A Firestone Walker Velvet Merlin Oatmeal Stout and a Rogue I2PA Imperial India Pale Ale did us right. We closed down the evening at our friend Duke Geren’s abode. Another multifaceted beer mind, Duke not only works at FH Steinbart Co. brewing supply shop in Portland, but he also helps with the beer making at Mt Tabor Brewing in downtown Vancouver, WA. It was movie night at “the Dukester’s” and in the house was Michael Umphress aka MMCoolJam aka Mr. #pdxbeergeek to share a wonderful bottle of Drink’in the Sunbelt, a pale wheat collaboration brew made with Mikkeller Brewing by Jester King of Austin, Texas. Also he shared with us a rich and well-aged waxed dipped bottle of 2010 Ninkasi Critical Hit Barleywine. We shared a barrel-aged Lost Abbey Angel’s Share that was given to us by Mr. Nunez. Then we settled in to watch some classic movies, for this night was to be declared Movie Night. Unfortunately, I fell asleep during the movie, having indulged in more than enough great beer than I probably needed. Still, it as a gay ol’ time and The Beer Wench was shown how it is done here in Beervana. Until next time, cheer!