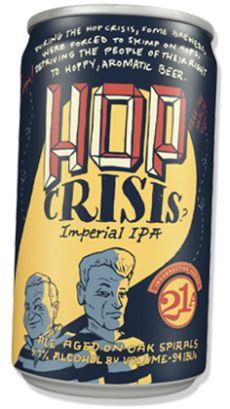 SAN FRANCISCO, CA (July 2014) – Crisis. What Crisis? This July, 21st Amendment Brewery co-founders Nico Freccia and Shaun O’Sullivan are breaking out of Alcatraz – again – for the newest release of their Hop Crisis Imperial IPA. A few years ago, when hop prices shot through the roof and many brewers were forced to skimp on hops, the folks at 21st Amendment decided there was only one thing to do.They made the biggest, hoppiest IPA they could imagine and then aged it in oak for good measure. And this year’s special release includes a double dry hopping regimen with new, experimental hops added to old favorites.

“We love to experiment with the hops in this beer each year and it’s especially fun to see how they interact with the oak,” says brewmaster O’Sullivan. “This year we are using a new, yet to be named, experimental hop as well as a new Australian variety and some classics like Saaz, Amarillo and Citra.  Coming in at 9.7% alcohol, it’s really balanced with subtle layers of flavor.”

“The Alcatraz reference on our package is about our alter egos and their quest to ‘Free the Hops’,” noted Freccia. “And it’s a great opportunity to have fun with this beer on every level. A daring escape through the sewer pipe, surfing monster waves while being chased by a great white shark and a high speed getaway on the San Francisco cable car are all part of the adventure,” he adds. “Somehow I end up wearing a dress at the end of all of it, though, which I’m still not sure about.”

About 21st Amendment:
In 2000, Nico Freccia and Shaun O’Sullivan opened the doors to the 21st Amendment brewpub in San Francisco’s historic South Park neighborhood with Freccia managing the restaurant and O’Sullivan spearheading the brewing process. In addition to quickly becoming one of the city’s favorite pubs, 21st Amendment began expanding beyond the Bay Area by helping to pioneer the movement to canned craft beer. Known for their witty names and delicious brews, 21st Amendment offers three year-round selections, as well as seasonal offerings and their infamous ‘Insurrection Series’, a once-in-a-while limited edition release. Today, 21st Amendment is among the top 50 craft beer brewers in America and is sold in 17 states.