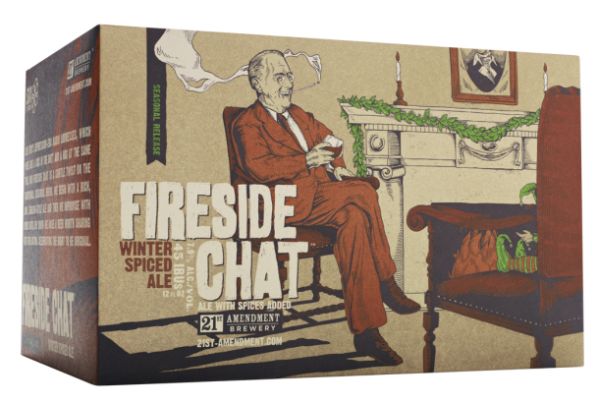 The 21st Amendment Brewery announces the release of their first-ever seasonal beer in a can, Fireside Chat, a winter spiced ale. Fireside Chat hearkens back to the Golden Age of Radio when the Great Depression held the country in a pincer grip, and people longed for better times. President Franklin Delano Roosevelt’s fireside chats, which often began with the words, “Good evening, friends,” were hugely popular and his message was one of reassurance and hope. 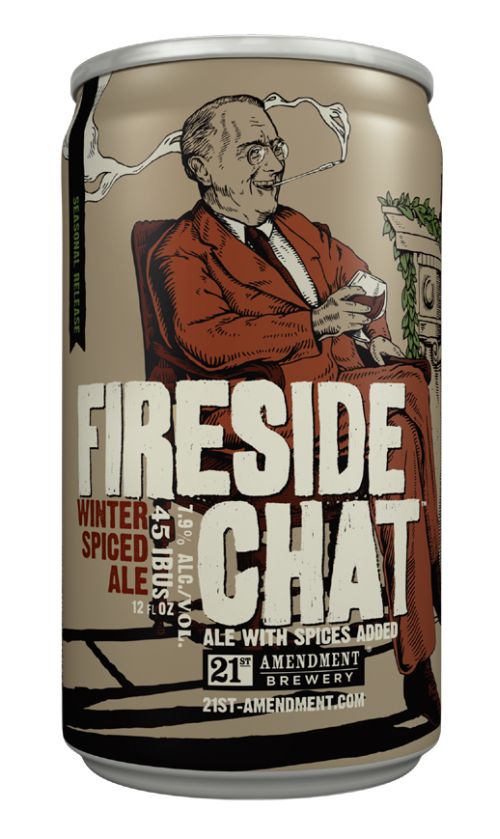 Fireside Chat is a subtle twist on the traditional seasonal brew.  We begin with a rich, dark ruby brown, English-style ale and then improvise with spices until we know we have a beer worth sharing with the nation. During Halloween, Thanksgiving, Christmas and New Year’s, Fireside Chat will brighten the faces of those who enjoy it, near the hearth or at the table. Its subtle blend of spices balances the malty ale and will make this a foodie’s favorite, as it pairs perfectly with holiday meals.

Nico Freccia and Shaun O’Sullivan, 21st Amendment co-founders, are proud of their winter ale. “I hope everyone will have fun giving Fireside Chat a try,” says Nico.

“It’s brewed to be a beer to share and to celebrate the warmth and aromas and flavors of the season,” adds Brewmaster Shaun. 21st Amendment Brewery has brewed various winter specialty beers since shortly after the brewery first opened ten years ago. To make it unique each year, Shaun personally selects a special blend of spices for the beer, based on the moment’s inspiration. In the tradition of the holidays, it’s only available now through December.

Fireside Chat’s can and six-pack graphics feature FDR relaxing by the fire and having a chat with an elf. The retro style is familiar and inviting and conjures up Norman Rockwell images of American families gathering around a big boxy radio or the fireplace (with a wry twist).