Laughing all the way to the bank.

Budai in folklore is admired for his happiness, plenitude, and wisdom of contentment. This however is not always true in the beer industry.  At least not for an Australian-based producer of light green-bottled adjunct lager selling as Lucky Buddha Beer.  According to Jeff Alworth of Beervana, who broke the story, yesterday:

Moreover, even though the intentions of commercializing Buddha to sell a product (in this case crappy beer) may not have been done with negative intentions, it is clearly a symbol of multi-nationalistic greed while attempting to garner ownership over a religious symbol to advance for financial prophet (no pun intended).  Alworth continued in comments on the article:

The Aussie company, however, has plucked an ignorant stereotype from their pool of cultural bigotry and run with it to sell beer.

Further, today we received a press release from the amiable Chris Castillo of the wonderful Laughing Buddha Brewing Co. of Seattle informing us of their forthcoming name change.  According to Castillo, as of April 1, 2009, Laughing Buddha will operate under the name Trade Route Brewing Co.

Smouha Fabrics, owner of Lucky Drink Company of Australia, sent a letter to the Seattle microbrewery in May 2008 objecting the use of Laughing Buddha’s name, citing US trademark registrations for their Buddha-bottle design and the name “Lucky Buddha.” 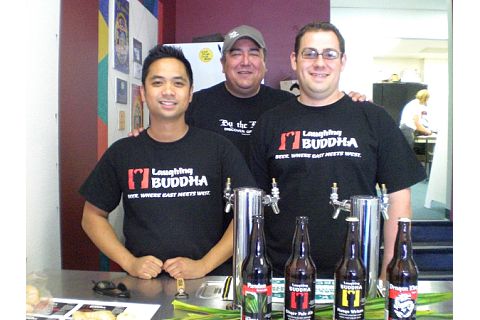 “We didn’t feel that we were infringing on their trademark,” says Chris Castillo, co-owner of Laughing Buddha Brewing Company. “Smouha is a big corporation and we couldn’t afford to go through the litigation process.”

Laughing Buddha Brewing Company began selling their line of beers to restaurants, pubs, and stores in late 2007. They brew a brown ale with pandan leaves, a hefeweizen with mangoes, and a pale ale with ginger.

“We’re experimenting with many ingredients from ancient trade routes,” says Castillo. “Trade Route Brewing Company will be a better fitting name for us.”