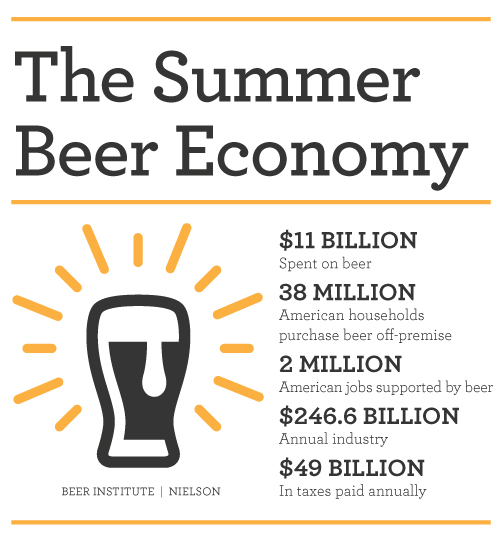 WASHINGTON, DC — More than 38 million American households will purchase a cold beer this summer, making beer the preferred choice over all other beverage alcohol for summer occasions like backyard barbecues and ball games with friends and family.

In the 15 weeks between Memorial Day and Labor Day in 2013, beer and malt beverage sales topped $11 billion, making it one of the largest selling categories of all food and beverage channels according to Andrea Riberi, senior vice president at Nielsen.

“It’s really no surprise that beer will be the top choice at celebrations and occasions across America this summer,” said Chris Thorne, Beer Institute vice president of communications.  “Beer brings people together. And beer’s low ABV means it can be enjoyed responsibly.”

In addition to being a responsible choice for moderating consumption, beer means big business for communities across the country. According to an economic study jointly commissioned by the Beer Institute and the National Beer Wholesalers Association in 2012, U.S. brewers and beer importers support an industry that puts more than 2 million Americans to work. Beer also contributed $246.6 billion to America’s economy and generated $49 billion in local, state and federal taxes. In fact, more than 40 percent of what consumers pay for a beer goes to taxes, making taxes the most expensive ingredient in beer today.

“As you reach into your cooler this summer, we hope that you toast to the hardworking men and women in your hometown that support this great industry,” added Thorne. “From grain to glass, this beverage is an economic engine, and that’s a great reason to celebrate.”

For information about the economic impact of beer in the U.S., including state and Congressional district data, please visit www.BeerServesAmerica.org.