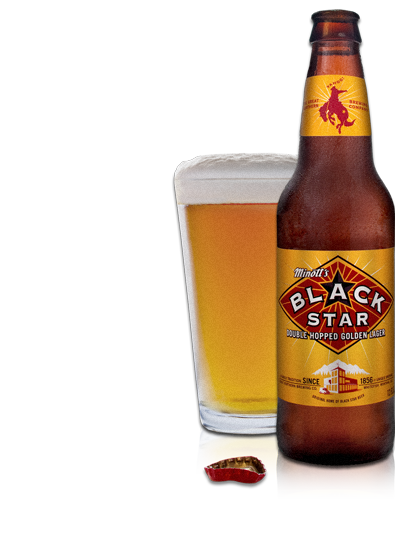 Minott Wessinger, fifth generation brewer and great-great grandson of brewing pioneer Henry Weinhard, is thrilled to re-introduce Black Star Double Hopped Golden Lager to the Pacific Northwest and Northern California.  Initially introduced in Montana in 1995, Black Star was on hiatus from the market for seven years prior to being reintroduced.  Following a fifteen year hiatus for the brand, Wessinger has introduced it to select natural food stores and on-premise locations this week.

“Given our family history of brewing – which dates back to 1865 – Black Star is a true legacy beer and I am thrilled to re-introduce it to the market place,” said Wessinger. “The traditional European-style Pilsner beer, refreshing with lots of taste, is the perfect beer for summer.”

Black Star is a double hopped (dry-hopped) golden lager based on traditional European Pilsner beers made with both Bavarian Mittelfrüh and Czech Saaz hops and two row malting barley.  “By hopping it in the kettle and then again prior to finishing, Black Star opens with a distinct hop aroma and a rich full bodied flavor, while remaining remarkably crisp and refreshing,” noted Wessinger.

Black Star is brewed at the Great Northern Brewing Company in Whitefish, Montana, a traditional Gravity Flow style brewery built by Wessinger in 1994.  The mostly automated brew house is one of the most complex for its size in the country.  The fermenting and packaging area, known as the Cellar, is open and roomy, allowing for many brewery operations to take place at the same time.

Consumers will recognize Black Star by the distinctive bright gold labels, meant to “mimic the golden color of the beer inside,” said Wessinger.

As demand for Black Star grows, it will be brewed at its original home in Whitefish, Montana as well as Milwaukee, Wisconsin.  “Black Star is a true passion project and something I’ve always wanted to bring back when the timing was right,” Wessinger says.  “Providing a beer to consumers that combines flavor and refreshment of traditional lagers is the fulfillment of a lifelong dream.”

Black Star retails for $7.99 for a 6-pack and $14.99 a 12- pack and will be available in select bars and upscale natural and organic grocery stores.  For more information, and a list of accounts where Black Star beer can be found please visit Black Star’s Store Locator http://blackstarbeer.com/beer-locator/.

Black Star Double Hopped Golden Lager was first brewed in Whitefish, Montana at the Great Northern Brewing Company in 1995. The beer was created by Minott Wessinger, a 5th generation brewer and great-great grandson of West Coast brewing pioneer Henry Weinhard.  After seven years of brewing Black Star, Wessinger chose to stop production in 2002 when other projects prevented him from giving Black Star the time and energy it deserved.  In February 2010, Black Star returned to the kettles at the Great Northern Brewery and was first reintroduced in Montana.