WASHINGTON, DC – The United States saw an ever-higher number of new breweries enter the market in 2013, with a record-high 3,699 active ‘permitted breweries’ overseen by the Alcohol Tobacco Tax and Trade Bureau (TTB). An analysis by the Beer Institute showed that the majority of the 948 new permits issued in 2013 went to brewpubs.

The Beer Institute analysis showed that four states account for one-third of all breweries in the United States: California, Washington, Colorado and Oregon. 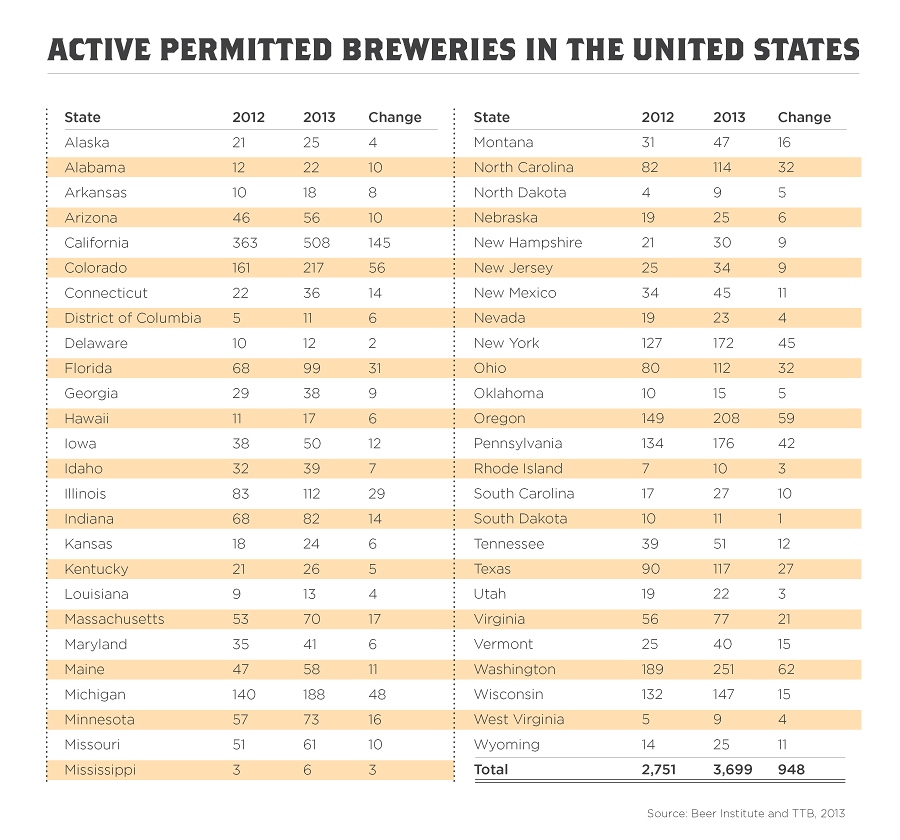 “We have tracked the industry since our preceding trade association was first founded in 1862, and there’s a story in these numbers. Beer is constantly evolving in the U.S., with more small brewers than ever before, more brands being introduced by national brewers and growing interest in imports,” said Chris Thorne, vice president of communications at the Beer Institute.

The Beer Institute’s 2012 Beer Serves America study demonstrated the industry’s economic power. The study concluded that beer puts more than two million Americans to work, from farmers to factory workers, and brewers to bartenders. The combined economic impact of brewers, beer distributors, retailers, suppliers and other inducted industries was calculated to be $246.5 billion in 2012. The industry paid $49 billion in federal, state and local taxes that same year.

“There was a long period of consolidation in the industry, but during that same period, beer became the most popular drink in America. Thanks in great part to the small brewer tax credit, today we’re seeing more small brewers than ever before. But consumers are also increasingly less loyal to beer, and that is a challenge for every brewer of any size,” Thorne said. 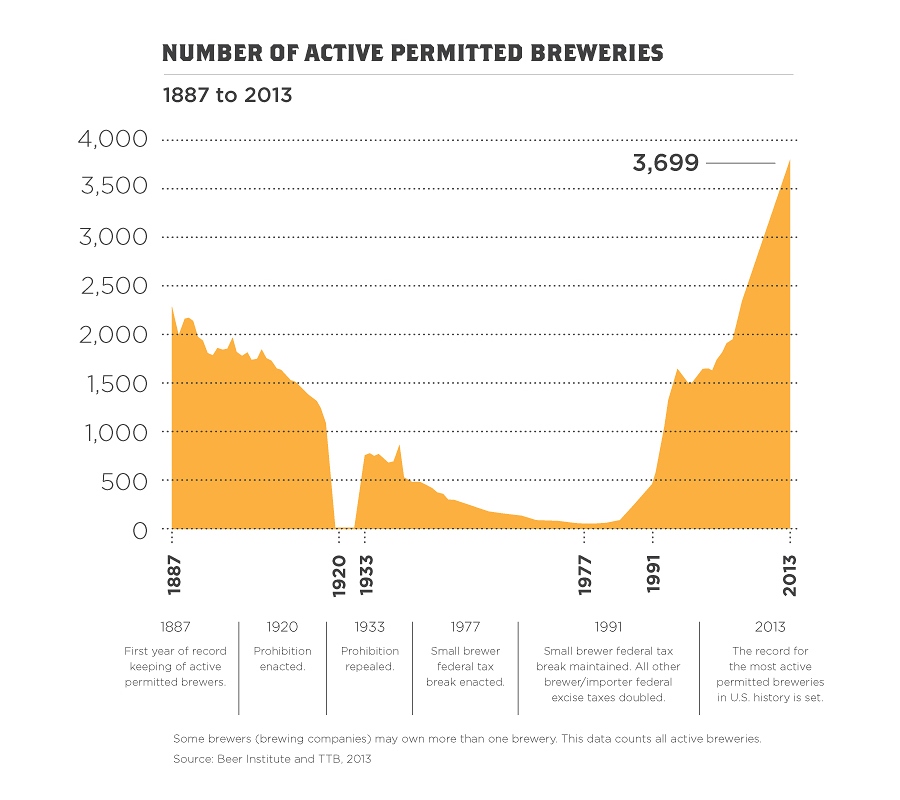 Under the existing tax structure, small brewers (defined by U.S. Tax Code as those that produce up to 2 million 31-gallon barrels per year, or the equivalent of 110 million six-packs) receive a substantial break on federal excise tax, paying only $7 per barrel on the first 60,000 barrels. The regular tax rate is $18 per barrel, which is paid by all brewers of more than 2 million barrels, all beer importers regardless of size, and on everybarrel produced by small brewers beyond 60,000.

Editor’s Note: The Beer Institute requests active permitted brewery data once per year from the TTB. Permit counts are different from Brewer counts as some brewers own more than one brewery, while other brewers share breweries. Relevant table and graph included below.

The Beer Institute is the national trade association for the American brewing industry,representing both large and small brewers, as well as importers and industry suppliers. First founded in 1863 as the U.S. Brewers Association, the Beer Institute is committed today to the development of sound public policy and to the values of civic duty and personal responsibility: www.BeerInstitute.org. Connect with us @BeerInstitute and on Facebook.