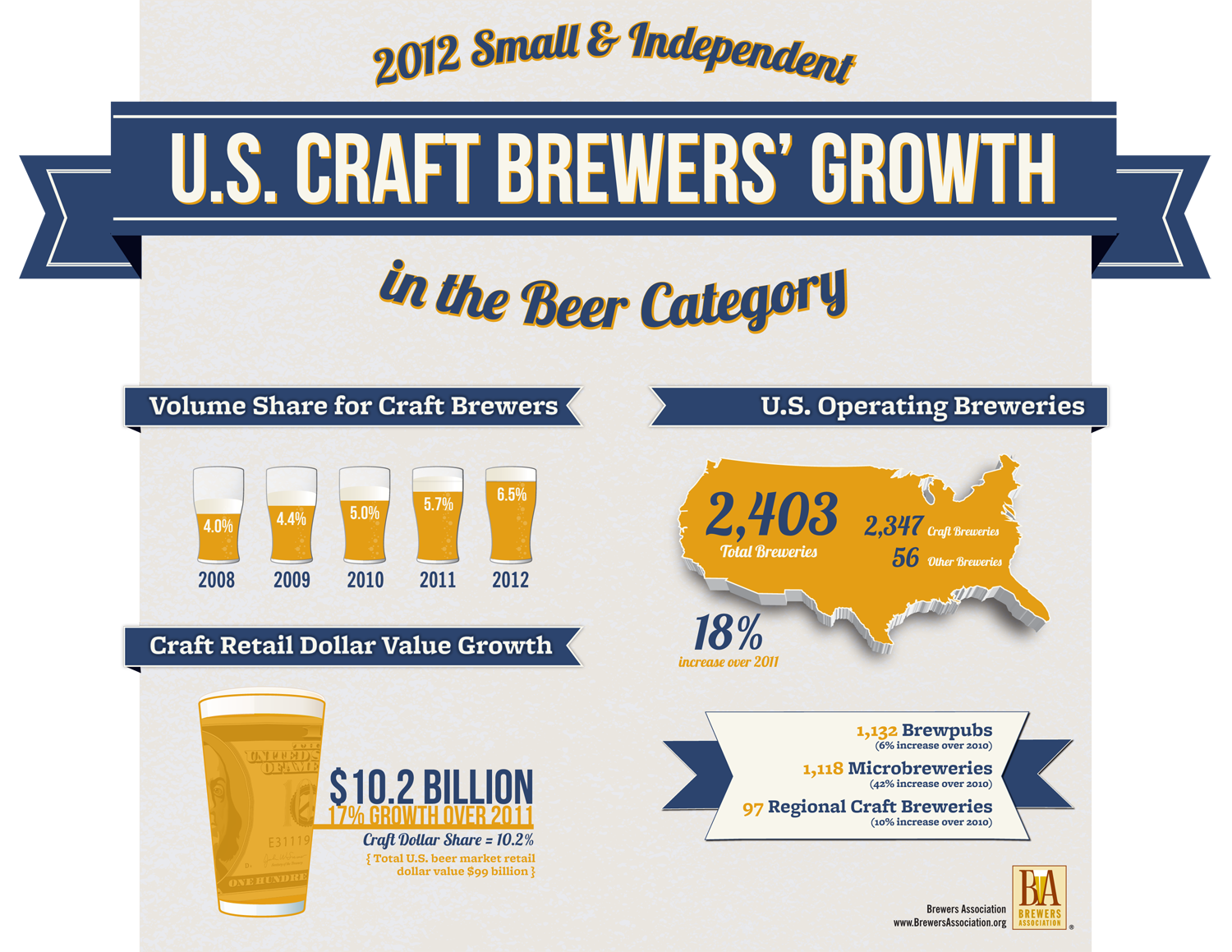 Volume and Sales Significantly Outpaced the Overall Market in 2012

Boulder, CO • March 18, 2013— The Brewers Association (BA), the trade association representing small and independent American brewers, today released 2012 data on U.S. craft brewing1 growth. In a year when the total U.S. beer market grew by one percent, craft brewers saw a 15 percent rise in volume2 and a 17 percent increase in dollar growth, representing a total barrel increase of almost 1.8 million.
With production at 13,235,917 barrels in 2012, craft brewers reached 6.5 percent volume of the total U.S. beer market, up from 5.7 percent the previous year. Additionally, craft dollar share of the total U.S. beer market reached 10.2 percent in 2012, as retail dollar value from craft brewers was estimated at $10.2 billion, up from $8.7 billion in 2011.
“Beer is a $99 billion industry to which craft brewers are making a significant contribution, with retail sales share hitting double digits for the first time in 2012,” said Paul Gatza, director, Brewers Association. “Small and independent brewers are consistently innovating and producing high quality, flavor-forward craft brewed beer. Americans are not only responding to greater access to these products, but also to the stories and people behind them.”

In 2012, there was an 18 percent increase in the number of U.S. operating breweries, with the total count reaching 2,403. This count includes 409 new brewery openings and only 43 closings. Small breweries created an estimated 4,857 more jobs during the year, employing 108,440 workers, compared to 103,583 the year prior.

“On average, we are seeing slightly more than one craft brewery per day opening somewhere in the U.S. and we anticipate even more in the coming year. There is clearly a thirst in the marketplace for craft brewed beer, as indicated by the continued growth year after year,” added Gatza. “These small breweries are doing great things for their local communities, the greater community of craft brewers, our food arts culture and the overall economy.”

Note: Numbers are preliminary. A more extensive analysis will be released during the Craft Brewers Conference in Washington, D.C. from March 26-29. The full 2012 industry analysis will be published in the May/June 2013 issue of The New Brewer, highlighting regional trends and sales by individual breweries.

1 The definition of a craft brewer as stated by the Brewers Association: An American craft brewer is small, independent, and traditional. Small: Annual production of beer less than 6 million barrels. Beer production is attributed to a brewer according to the rules of alternating proprietorships. Flavored malt beverages are not considered beer for purposes of this definition. Independent: Less than 25 percent of the craft brewery is owned or controlled (or equivalent economic interest) by an alcoholic beverage industry member who is not themselves a craft brewer. Traditional: A brewer who has either an all malt flagship (the beer which represents the greatest volume among that brewers brands) or has at least 50 percent of its volume in either all malt beers or in beers which use adjuncts to enhance rather than lighten flavor.

About the Brewers Association

The Brewers Association is the not-for-profit trade association dedicated to small and independent American brewers, their craft beers and the community of brewing enthusiasts. The Brewers Association (BA) represents more than 70 percent of the brewing industry, and its members make more than 99 percent of the beer brewed in the U.S. The BA organizes events including the World Beer Cup®, Great American Beer Festival®, Craft Brewers Conference & BrewExpo America®, SAVOR?: An American Craft Beer & Food Experience and American Craft Beer Week®. The BA publishes The New Brewer magazine and its Brewers Publications division is the largest publisher of contemporary and relevant brewing literature for today’s craft brewers and homebrewers.