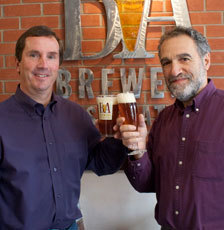 Bob Pease has been promoted to Chief Operating Officer of the Brewers Association, from Vice President. Pease will have additional responsibilities in the area of personnel administration, and oversight in key operational areas such as finance and IT, with an enhanced role in government affairs.

Pease was hired in 1993 as the Operations Director. He was promoted to Vice President in 1999, and held that position for the last 11 years.

Charlie Papazian remains President and CEO with continued focus on Brewers Association stewardship, government affairs, beer community relations and serving as a beer ambassador. Papazian continues to act as the Association’s key liaison to its board of directors.

“Since 1978, I have enjoyed championing the best interest of craft brewers and craft beer. I have seen the beer community through many dramatic changes—changes that are ultimately serving the best interests of both beer drinkers and brewers,” Papazian said. “I feel fortunate to continue leading the organization with someone as loyal and dedicated to the beer community as Bob. It’s also a privilege to have the guidance of a group of people as dynamic and passionate as our board of directors. Continuing my involvement is like waking up each morning in a beer garden, knowing there’s always another round being served.”

“The Brewers Association has grown tremendously in the past few years; this restructuring addresses that growth by further empowering staff with the tools and responsibilities that will help us best serve our members,” Pease added. “I think I speak for both Charlie and myself in saying that we look forward to continued development of our ability to serve members and protect the interests of the broader beer and brewing community.”

The craft beer industry itself is growing; in 2009, sales dollars increased 10.3 percent and volume  increased 7.2 percent over 2008.