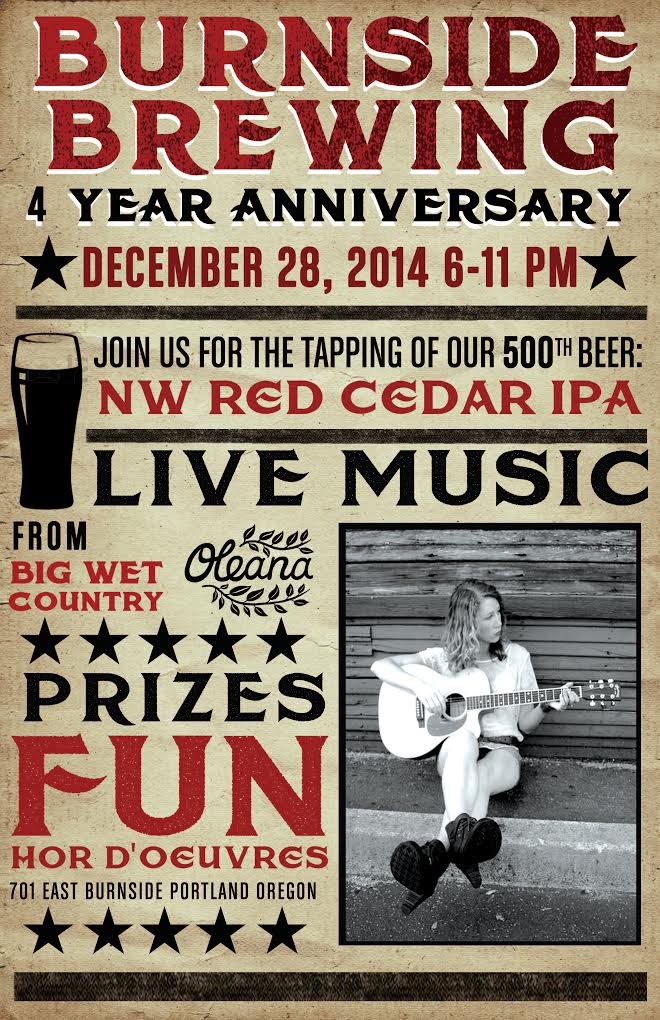 Portland, OR – Burnside Brewing Co. celebrates an amazing 4 years on Sunday, December 28, from 6-11pm with the release of two new beers and a party at the brewpub featuring free food, live music, and $4 beers all day.

A staple of Oregon’s thriving brewpub culture, Burnside Brewing Co. has become known as one of the top places to grab a bite as well as a brew. Focused on easy-drinking brews that can be simple or complex but always meant to be paired with food, the brewery takes the same approach to the pub menu with indigenous and handcrafted ingredients. Popular items continue to be the “Cohiba” duck confit cigar, housemade sausages, and pub burger.

“The last four years have flown by and the brewing industry continues to change at a torrid pace, especially here in Portland. We expect to stick to our philosophies of food-friendly beers while being unafraid to take chances in the brewhouse,” remarked co-founder/owner Jay Gilbert. Burnside Brewing launched its first canned beer in 2014; the best-selling Couch Select Lager has been a tremendous success in stores and will be followed up by a new beer in cans in 2015, as well as more new one-off and seasonal beers in 22oz bottles. Looking forward to the anniversary and the impending 5th year, Jay Gilbert exclaimed, “we feel like we’re hitting our stride as a brewery. Here’s to many more years brewing and selling beers with my best buddies. Cheers!”

On Sunday, December 28, from 6-11pm Burnside Brewing Co. will host live music from Big Wet County and Oleana at the pub, as well as a special tapping of the brewery’s 500th batch, “NW Red Cedar IPA,” and a firkin of a new release, “Highbury Bitter.” In honor of the four year anniversary there will be free hor d’oeuvres, prizes, and $4 beers!

Batch 500 is a Cedar IPA based on the popular one-off brewed for Beers Made By Walking. To celebrate making it halfway to 1,000 brews, Burnside has brewed a Northwest-style IPA aged on Western Red Cedar. Fermentation with a Northwest ale yeast provides a gentle, fruity aroma to complement the generous use of Amarillo and Meridian hops. The cedar lends a dry, piney, and resinous finish to this NW inspired nectar.

Highbury Bitter is inspired by our love of all things pub culture, and our favorite squad, this strong bitter reminds us of a rainy day at the old grounds.  English Maris Otter and caramel malts provide a biscuit, bread, and caramel base to balance the fruity London ESB yeast. UK Challenger and East Kent Golding hops round out this traditional English recipe. One-Nil to the Arsenal! 5.814% ABV and 37 I.B.U.’s