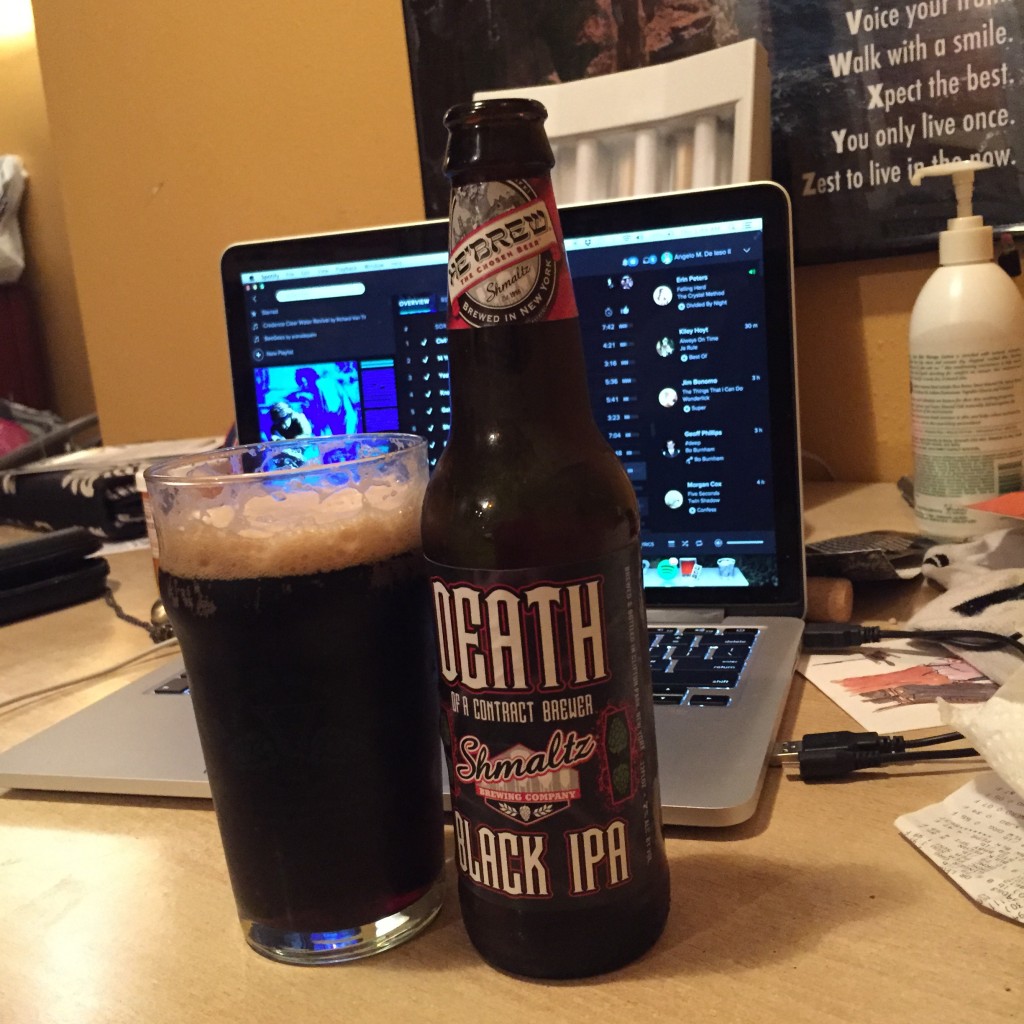 It’s been too long since a truly venerable Cascadian Dark Ale has passed across the desk of Brewpublic. But thanks to Shmaltz Brewing out of Clifton Park, New York, the real Death of a Contract Brewer has come to life in this remarkable “Black IPA.”

Coinciding with He’brew’s numerology front, Death has 7 hops and seven malts. Here’s the low down from the brewers. Grab a sixer if you can find the stuff!

Now brewing exclusively in Clifton Park, NY — Thursday, September 3, 2015 — Arise and take possession of a new Halloween treat for craft beer ghouls and goblins roaming the beer isles in search of a scary good black IPA. This Halloween season, behold ShmaltzBrewing’s latest spellbinding limited-edition release: DEATH BLACK IPA®. Overflowing with characteristics of coffee, dark chocolate, and fresh citrus with a mix of pine, the jet black IPA’s deep roasted malt flavors provide support for a bold mix of bright and bitter West Coast hops. Available for the first time on retail shelves as a 4-pack (12 oz. bottles) and on draft at select bars, DEATH BLACK IPA® is brewed with 7 malts, 7 hops, and comes in at 7% ABV. DEATH BLACK IPA® is now nationally available in 35 states through Shmaltz’s extensive distribution network. To find a wholesaler near you, please visit shmaltzbrewing.com/HEBREW/distributors.html
“Dante said it best with, ‘They yearn for what they fear.’ These words could only have been spoken about a black IPA so endearingly cruel looking yet so devilishly aromatic and appealing,” said Shmaltz Brewing Company lead brewer, Richie Saunders.

About Shmaltz Brewing Company
Ranked in 2013 as one of the “Top 100 Brewers in the World” by RateBeer.com, Shmaltz won 9 Gold and 5 Silver Medals in the World Beer Championships in 2012. A recipient of the “Distinguished Business Award” by the Brooklyn Chamber of Commerce, Shmaltz was also included in the “Top 50 Fastest Growing Bay Area Companies” by San Francisco Business Times.

Founder and owner Jeremy Cowan established the company in San Francisco in 1996 with the first 100 cases of He’brew Beer® hand bottled and delivered throughout the Bay Area in his Grandmother’s Volvo. He’brew® now sells across 35 states, through 40 wholesalers and nearly 5,000 retailers. In 2007, Shmaltz released a new line of craft brewed lagers under the Coney Island® banner. The Coney Island brand was recently acquired by Alchemy and Science, a craft beer incubator, owned by Boston Beer (Sam Adams).

After 17 years of being an outspoken cheerleader for contract brewing, Shmaltz recently broke with tradition and opened its own New York State production brewery in Clifton Park, NY, 10 minutes north of Albany’s capital district. Shmaltz’s new home boasts a 50-barrel brewhouse with 20,000 barrels of annual capacity. The new brewery packages 12 and 22 ounce bottles and kegs of their diverse core and seasonal favorites, and hosts fans and beer tourists in their new tasting room for tours, barrel-aged previews, and special releases.

In 2010/11, Cowan published his small business memoir, Craft Beer Bar Mitzvah: How It Took 13 Years, Extreme Jewish Brewing, and Circus Sideshow Freaks to Make Shmaltz Brewing Company an International Success. A free sampling of Chapter One and suggested beer pairings, can be viewed at www.craftbeerbarmitzvah.com. In 2012, Cowan spearheaded the creation of the non-profit New York City Brewers Guild (which manages NYC Beer Week) and served as its Founding President.