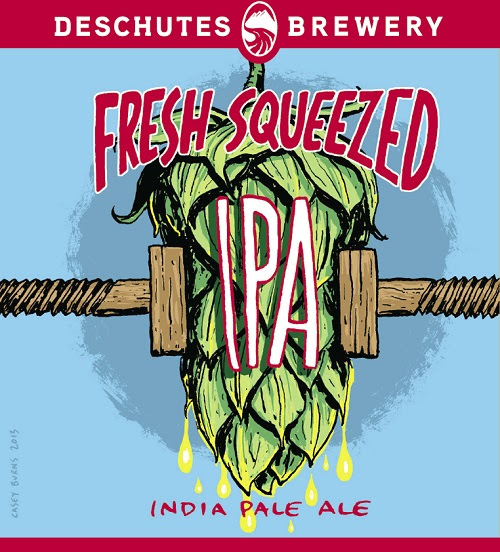 Fresh Squeezed IPA, which made its debut last summer in Deschutes Brewery’s Bond Street Series, is now moving into six-packs and becoming the first year-round brew in the series. Lauded by DRAFT Magazine, Fox News and Gayot.com as one of the top beers of 2013, Deschutes Brewery is happy to increase availability of this “new-school IPA” to fans across the country starting the first week of March.

“At Deschutes, making beer is a journey,” said Veronica Vega, assistant brewmaster, responsible for brewing operations at the company’s Bend, Oregon brewpub. “Fresh Squeezed IPA started its adventure as an experimental brew in our pubs, before moving into the Bond Street Series last summer. We couldn’t keep this beer on the shelf last year due to its popularity, so we’re excited to share this damn tasty beer with even more people this year.”

Fresh Squeezed IPA drips with juicy, citrus flavor and aroma thanks to an extravagant amount of Citra, Mosaic and Nugget hops. An unimposing malt profile of Pale, Crystal, and Munich malts allow the citrus stars to shine making a delightful, easy to drink IPA that dares you to have just one. (6.4% Alcohol by Volume; 60 International Bittering Units)

Like all of the beers in the Bond Street Series, this hop-centric brew was formerly exclusive to the brewery’s Bend and Portland Oregon brew pubs. This year, the beer will be available across most of Deschutes Brewery’s 25-state footprint in six-packs and on draft.

About Deschutes Brewery
Founded in 1988 as a brew pub in Bend, Oregon, Deschutes Brewery is known for brewing a diverse line-up of award winning beers including the popular Black Butte Porter and Mirror Pond Pale Ale. In 2008, the brewery opened a second pub in Portland’s Pearl District. Deschutes Brewery now ships beer to 25 states and around the world from its main brewing facility located on the banks of the Deschutes River. To find out more, visit www.DeschutesBrewery.com.