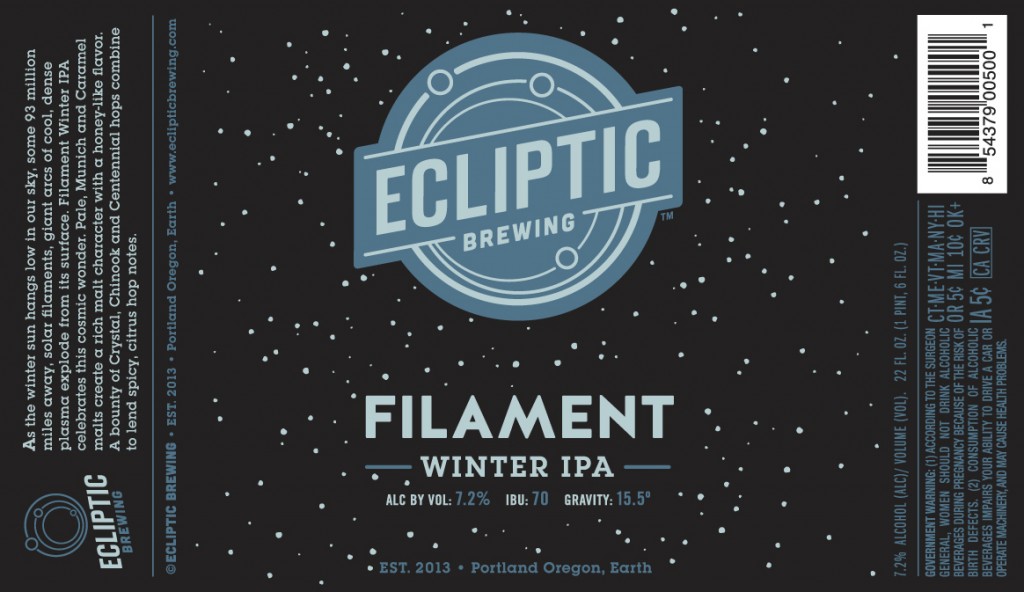 PORTLAND, Ore. – Dec. 9, 2013 – Ecliptic Brewing today announced the immediate availability of its first bottled beer release: Filament Winter IPA, a well-balanced American IPA with a spicy, citrusy hop character and rich malt profile. The beer will be available for purchase in 22-ounce bottles at the brewpub starting today at 11 a.m.

In addition to the release of Filament, Harris has announced the upcoming availability of a collaboration beer with Cigar City Brewing. The unique, pinot noir barrel-aged strong ale is called Illuminating the Path, and was brewed with hibiscus and acai berries from Florida, as well as rose hips and marionberries from Oregon. Harris flew out to Tampa, Fla., in May of 2013 to visit Cigar City Brewmaster Wayne Wambles, where they concocted the concept for Illuminating the Path and brewed the beer collaboratively.

Ecliptic Brewing is the only place west of Tampa where Illuminating the Path will be available for purchase.

“We achieved a major milestone in October when we opened the brewpub for business,” said John Harris, brewmaster and owner of Ecliptic Brewing. “Now we are really excited to announce our first bottled beer, Filament Winter IPA, which is being released fresh off the bottling line today. Then next week, bottles of our collaboration with Cigar City are coming in and will be available for our fans. It’s an exciting season for Ecliptic Brewing.”

In addition to being available at the brewpub on 825 N. Cook St. in Portland, Ore., Filament Winter IPA is being distributed throughout Oregon and will be available in select locations in the coming week.

Illuminating the Path will only be available at the brewpub, and Harris has only 15 cases of the beer to sell. Ecliptic anticipates the beer selling out fast on the release date of December 16, 2013, at 5 p.m.

Please visit www.eclipticbrewing.com for more information on the brewery, including hours of operation and beer and food menus, or follow Ecliptic Brewing on Facebook for the latest brewery news and happenings.

About Ecliptic Brewing
Ecliptic Brewing is a venture from John Harris, an Oregon craft brewing pioneer. The name Ecliptic symbolizes our yearly path around the sun on planet Earth. This happens to be a connection between Harris’s two passions – brewing and astronomy – as well as his philosophy on experimentation. Much like the seasons change as the earth makes its way around the sun, the beer and food menus at Ecliptic will be in constant change and rotation throughout the year. The goal is to push the limits of creativity in the brewhouse, and create a sense of place in both the restaurant and the beer he builds. Harris’s background is one steeped in Oregon’s rich history in craft brewing. He spent his first two years, from 1986-1988, as a brewer at McMenamins’ breweries; his next four were at Deschutes, where he created the recipes for Mirror Pond, Black Butte Porter, Jubelale and Obsidian Stout; and Harris spent the next 20 years of his illustrious career as a brewmaster at Full Sail in charge of creating the Brewmaster Reserve line of Beers.. He is now starting the next chapter with the creation of Ecliptic Brewing.

Illuminating the Path Release
When: Monday, December 16, 2013; 5 p.m.
Where: 825 N. Cook St., Portland, OR 97227
About the Beer: This will be the only chance to buy this beer west of Tampa, FL! Illuminating the Path was borne out of a fantastic meeting of minds when John Harris and Wayne Wambles of Cigar City Brewing in Tampa, FL, came together. The beer itself marries several ideas, namely connecting Florida and Oregon together and balancing the concepts of beer and wine. Illuminating the Path is a unique dark beer brewed with hibiscus and acai berries from Florida, as well as rose hips and marionberries from Oregon. The beer was then aged in pinot noir barrels from Oregon. The final product is fantastic; the total compilation of ingredients and the wine barrels create a vinous product that still maintains its identity as a beer. There are very limited quantities available to Ecliptic, so come in and get a bottle while they last.