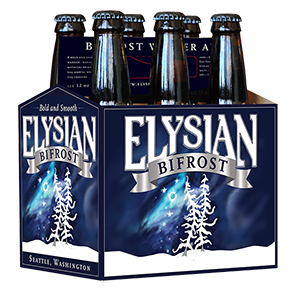 Elysian Brewing, Seattle, WA – A Funny Little Beer Story – Bifrost replaced our original winter ale, Valkyrie, in the seasonal rotation shortly after our dishwasher drank four pints of it, was cut off and threw a glass at the bartender. Billy was the first person we fired.  In an age when winter beers were invariably dark, and often spiced, Bifrost was like a ray of strong sunshine.

With lots of pale malt augmented only by a little 77° crystal and some Munich malt, Bifrost is a strong pale ale with a good amount of hop character (55 IBU, bittered with Simcoe and finished with a combination of Amarillo, East Kent Goldings and Styrian Goldings). Its name, however wintry it might sound, comes from the rainbow bridge linking Asgard, the Norse realm of the gods, with Earth. ABV 7.5% 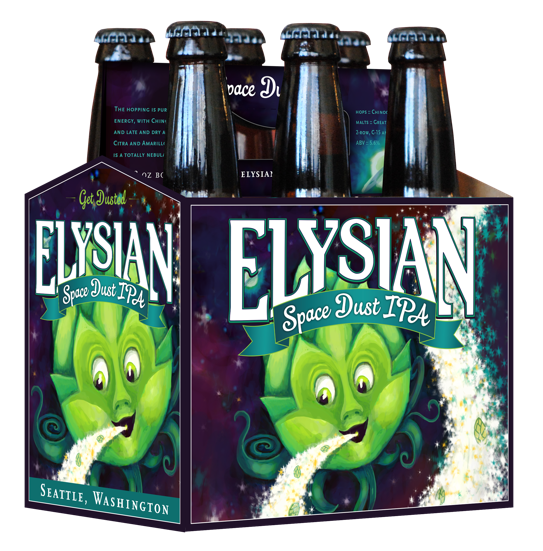 Dusty the space hop will be available year-round and he is bringing friends, six friends to be exact. Space Dust IPA is now available in 22-ounce bottles, draft and six-packs. Keep an eye out for Dusty the space hop at local stores, restaurants and taverns in all markets.

Space Dust is an (asteroid) belt of Chinook, Citra and Amarillo hops streaking across a fairly open-space grist of Northwest pale and touches of C-15 and Dextri-Pils malts. 70 IBU will deliver a good (VanAllen) belt of bitterness; 7.2% alcohol by volume keeps thrust at a medium burn; OG 16.8°P/1.068 SG if you’re a Mission Control type.

ABOUT ELYSIAN
Three-time Large Brewpub of the Year at the Great American Beer Festival, Elysian Brewing Company operates four neighborhood restaurants and a production brewery in Seattle, Washington. Known both for classic styles and for flexibility and innovation, Elysian has brewed over 350 different recipes since opening in 1996. While Elysian’s brewers use a variety of unusual ingredients, they are seasonally notorious for their pumpkin beers. Each year Elysian hosts the Great Pumpkin Beer Festival, where dozens of different pumpkin beers are poured, some of them from giant pumpkins.