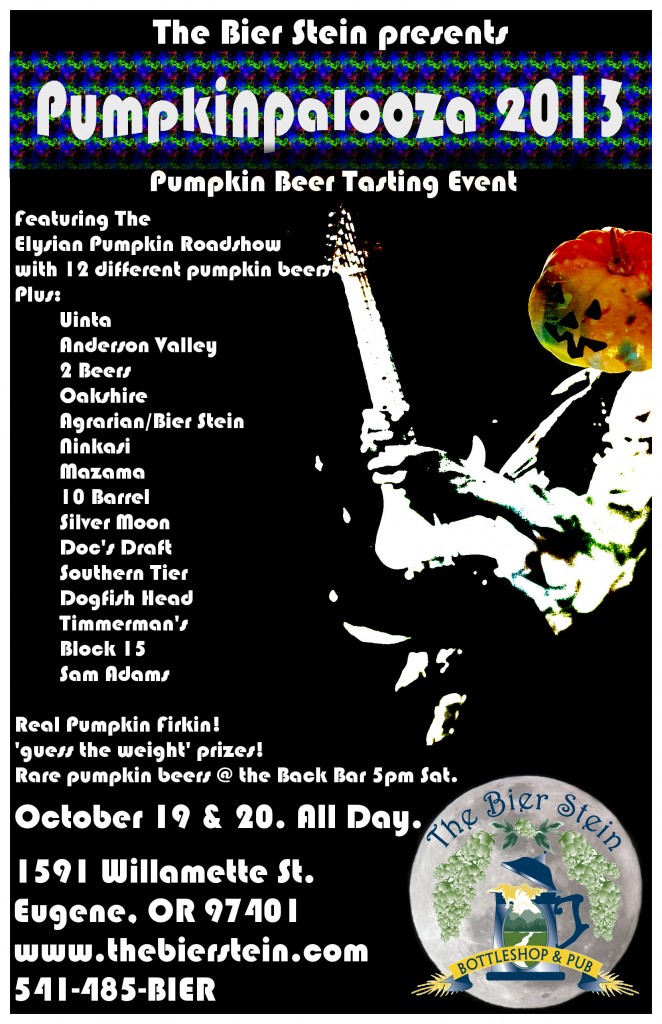 The Bier Stein will be dedicating the majority of its 30 taps to beers made with the most popular squash in America. The two-day event will feature a range of interpretations of the pumpkin beer style, from the classic amber hued, pie-spiced ale to pilsner, porter, and more. Pumpkin beer comes but once a year, and The Bier Stein’s previous pumpkin beer fests have been extremely well attended. This year’s fest will feature beers from about a dozen breweries. Elysian Brewing from Seattle, WA, arguably the most pumpkin-obsessed brewery, is bringing over a dozen different pumpkin beers, and a large, hollowed and charred pumpkin to fill with beer and tap on site! That will happen at 5pm on Saturday the 19th. Full beer list is below.

If pumpkins are your thing, you’ll want to get a taste of our auxiliary pumpkin menu, available all weekend. Pumpkin enchiladas, pumpkin soups, pumpkin salad, and pumpkin cheesecake are sure to pair well with a flight of pumpkin beers! Pumpkin-related clothing and/or costumery is encouraged to keep things festive. There will be a “guess the weight of the pumpkin” contest with prizes as well. The rarer selections will be tapped at 5pm Saturday in the Back Bar.

Elysian Brewing goes out of its way to use pumpkin and a veritable walk-in cabinet of spices in the most interesting ways possible. Mr. Yuck is a sour pumpkin ale with pumpkin in the mash, kettle, and fermentor (they use the “triple pumpkined” method in many brews). The Great Gherkin utilizes another member of the Cucurbit family – cucumber – and chai tea spices. Punkuccino adds a dose of cold-extract coffee… and then there’s the Calatrava Habanero Vanilla Epazote Pumpkin Ale, which needs no introduction. This event is part of Elysian’s Pumpkin Roadshow.

Pumpkinpalooza Pumpkinfest Poster will also include the debut of a beer brewed by The Bier Stein’s ‘Beer Baron’ Dave Stockhausen and beer steward Aaron Brussat at Agrarian Ales. They forewent the traditional pie spices and brewed a pumpkin beer with a blend of two peppers, Cherry Bomb chili and Sweet Italian Red, that were grown on Crossroads Farm where Agrarian is located. The Sugar Pie pumpkins were roasted in their handbuilt wood-fired oven a couple days before the brew. We hope you’ll join us to celebrate the advent of another beautiful pumpkin season of beer in Eugene.