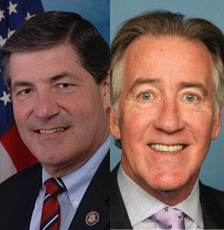 The Brewers Association (BA) announced yesterday that legislation seeking to enact a graduated beer excise tax rate of $3.50 and $16.00 for America’s small brewers has been introduced in both chambers of Congress. The BA is the not-for-profit trade group that represents the majority of U.S. brewing companies.

The Senate bill, S. 534, was introduced on March 9 by U.S. Senators John Kerry (D-Mass.) and Mike Crapo (R-Idaho). Joining Senators Kerry and Crapo were 17 of their Senate colleagues who signed on as original co-sponsors.

S. 534 mirrors the provisions contained in last session’s S. 3339 which gained the support of 28 U.S. Senators. Specifically, S. 534 would reduce the small brewer tax rate on the first 60,000 barrels by 50 percent (from $7.00 to $3.50/barrel) and institute a new rate of $16.00 per barrel on beer production above 60,000 barrels up to 2 million barrels. Breweries with an annual production of 6 million barrels or less would qualify for these tax rates.

“Small brewers have been growing and creating jobs ever since the craft beer revolution began,” said Senator Kerry. “Today there are over 40 small breweries in Massachusetts and 1,700 across the country, and this bill will help ensure that these small businesses keep people on the payroll and create jobs even during tight economic times.”

The Small Brewer Reinvestment and Expanding Workforce Act (Small BREW Act), H.R. 1236, was introduced by Representatives Jim Gerlach (R-Pa.) and Richard E. Neal (D-Mass.) on March 29. Joining them as original co-sponsors are Representatives Earl Blumenauer (D-Ore.), Peter A. DeFazio (D-Ore.), Duncan D. Hunter (R-Calif.) and Erik Paulsen (R-Minn.). Several of these Representatives are members of the House Ways and Means Committee. Like its Senate counterpart, the House’s Small BREW Act would enact a graduated beer excise tax rate of $3.50 and $16.00.

“Small craft brewers are growing, creating jobs and contributing in small and big ways to the recovery of the American economy,” said Charlie Papazian, president, Brewers Association. “The bipartisan effort by Congressmen Gerlach and Neal is a strong message most Americans will raise a toast to and is indicative of the grassroots community spirit with which Americans are embracing to work towards economic recovery and sustain it for the future.”

Papazian added, “The 1,700+ small American breweries account for about five percent of all the beer enjoyed in the United States and 50 percent of brewery jobs. The bipartisan support the Small BREW Act engenders will help assure a positive impact on agricultural, manufacturing, hospitality and distribution jobs for the future.”