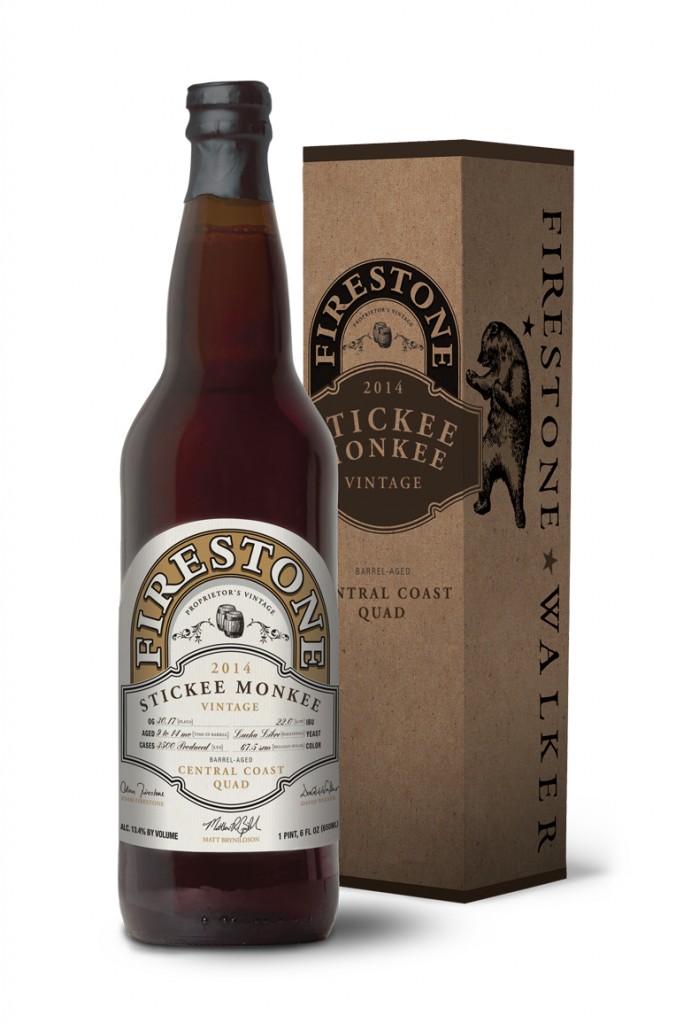 Paso Robles, CA: Hey, hey, it’s the Monkee…Firestone Walker Brewing Company’s 2014 Stickee Monkee, to be precise—an inaugural bottling that delivers a barrel-aged twist on the traditional Belgian Quadrupel style. The 2014 Stickee Monkee is set for a limited bottle release starting on May 17.

Brewed with Belgian candi sugar and aged in a selection of fine bourbon barrels, Stickee Monkee trailblazes its own category as a “Central Coast Quad.” The name Stickee Monkee is a nod to the native Sticky Monkey flower that thrives in the mountains along California’s Central Coast, as well as a shout-out to the Belgian monks who pioneered the Quad style.

While Stickee Monkee’s lineage at Firestone Walker dates back to 2010, this is the first time it has been bottled. Stickee Monkee was originally created to fill a stylistic gap in the brewery’s barrel-aged Anniversary Ale blending program, which is composed of eclectic component ales.

“We were aiming to purposefully balance out some of the really lean beers and more intense roasty stouts in the program by creating this sweeter sticky beer,” said Brewmaster Matt Brynildson.

The beer was initially brewed with Turbinado brown sugar from Mexico, but starting in 2012, Belgian candi became the predominant sugar used to brew Stickee Monkee.

“Belgian candi is a super unrefined sugar that drives a lot of color and caramelization,” Brynildson said. “It’s like something you want to pour on your waffles in the morning, and it’s what gives Belgian Dubbels and Quads their signature molasses sweetness.”

Stickee Monkee swings away from tradition, however, by being aged up to 14 months in bourbon barrels from Woodford Reserve, Elijah Craig and Four Roses. The Woodford Reserve barrels impart a smooth, rounded wood character. The Elijah Craig 12-year barrels bring more of a spicy, rustic note to the beer, while the Four Roses barrels contribute pure oak notes.

“I don’t know of any Belgian producers who are aging Quads in bourbon barrels, but to me, the wood adds just enough interesting flavor and oak astringency to counterbalance the sweetness and keep it from being cloying,” Brynildson said. “I think it’s a style that’s really suited to bourbon barrel aging.”

As for “Lucha Libre Ballistica” being the stated yeast on Stickee Monkee’s label, Brynildson said it’s best to consider that a bit of Monkee business.

The 2014 Stickee Monkee is limited to 3,500 cases of 22-ounce bottles. It will be available in select markets across the United States starting this month. The suggested retail is $16.99.