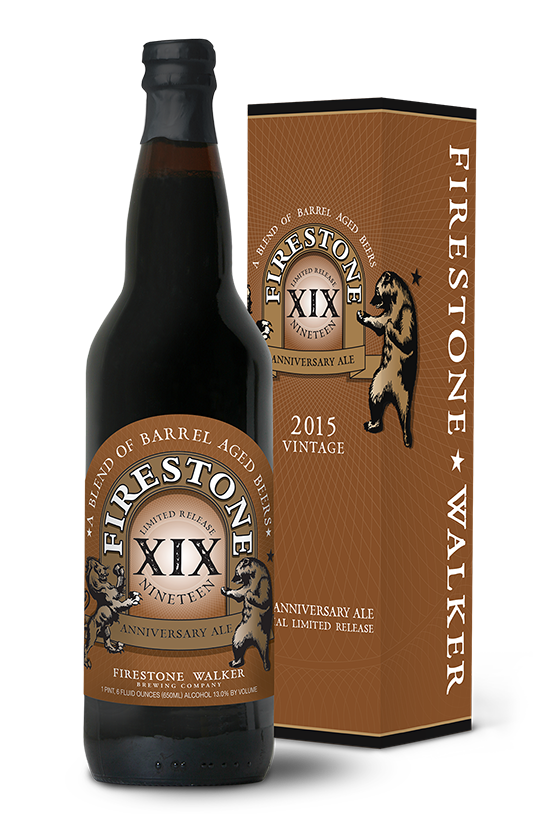 Paso Robles, CA: An annual rite came with a twist this year when local winemakers once again joined Firestone Walker’s brewing team for the blending of the next Anniversary Ale—only to discover that hoppy component beers had been taken off the table.

“We went back to the basics this year,” said Brewmaster Matt Brynildson. “We offered the winemakers a smaller number of barrel-aged beers to work with, and we eliminated the option of blending in our hoppy stainless steel finished beers. They were surprised at first, but it resulted in a rich and complex beer that is centered on barrel-aged flavors.”

In the past, as many as nine component beers were incorporated into the final Anniversary Ale blend. However, this year’s Anniversary Ale—called XIX—is comprised of four beers: Parabola, Stickee Monkee, Bravo, and Velvet Merkin.

Un-Hoppy
In recent years, Brynildson found that hop-driven component beers such as Double Jack and Wookey Jack were becoming increasingly influential in the final blend. “In a blending session, the palate can easily gravitate to hops, because they are assertive and seductive,” Brynildson said. “I was concerned that hoppiness might begin to encroach on the intended style of the Anniversary Ale, so I eliminated the temptation.”

He added, “In many ways, this latest beer reflects more of what a typical wine blend would be in terms of the number of components and how those components can work together. I believe it truly embodies what this project is all about.”

Grapes to Grains
“Our winemaker friends are practicing experts in the art of blending,” Brynildson said. “Their input is invaluable when it comes to blending a seamless beer from widely varied components.”

As always, the XIX blending session was both friendly and fiercely competitive. A total of 13 winemakers participated. The winemakers were paired off and presented with the component beers. The pairs were tasked with creating their own preferred blends from among the components. The preferred blends were then presented to the entire group and blind tasted. Individual votes were cast, and the blend with the most votes became the basis for XIX.

Sherman Thacher and Daniel Callan of Thacher Winery are credited with creating the winning blend that became XIX, granting them possession of the coveted cardboard crown that is awarded to the winning team each year.

Bravo / Aged in Bourbon and Brandy Barrels / 16.6% of Final Blend

ORIGINS & AVAILABILITY
XIX is the 10th release in Firestone Walker’s anniversary series, dating back to the release of the inaugural anniversary release called “Ten” in 2006. Over the ensuing years, Firestone Walker has developed one of the craft beer industry’s most extensive barrel aging programs, spanning upwards of 1,500 barrels. Brewing beer with oak barrels has been a pioneering focal point for the brewery since its founding in 1996.

XIX will be available in select markets across the United States starting in November. The suggested retail price is $23.99 for an individually boxed 22-ounce bottle.

BREWMASTER’S NOTES
“As a finished beer, XIX is a rich, chocolaty, chewy brew with brandy-soaked raisin and holiday fruitcake flavors. The blend is anchored by equal parts Stickee Monkee and Parabola, which combine to create a dense chocolate truffle-like base. Velvet Merkin and Bravo lend their spicy oak, leather and fruity accents to complete the brew. The beer is unfiltered and unfined so there will be a small amount of sediment in the bottom of the bottle. XIX is best enjoyed poured carefully into a half-filled brandy snifter or wine glass. Allow it to warm to 55F to fully enjoy the pleasing and complex aromas. As the beer sits and breathes in the glass the true complexity of this blend is revealed, so take your time. If you wait to open your bottle later, store it in a cool dark place. I suspect, like our other Anniversary offerings, that this beer will age well and change favorably for years to come.”

PARTICIPATING WINEMAKERS
“These are my friends and brothers in fermentation science, and practicing experts in the art of blending.” – Brewmaster Matt Brynildson

Also thanks to friends Arie Litman, Pete Slosberg and Bobby Fox for lending their expertise to the blending session.