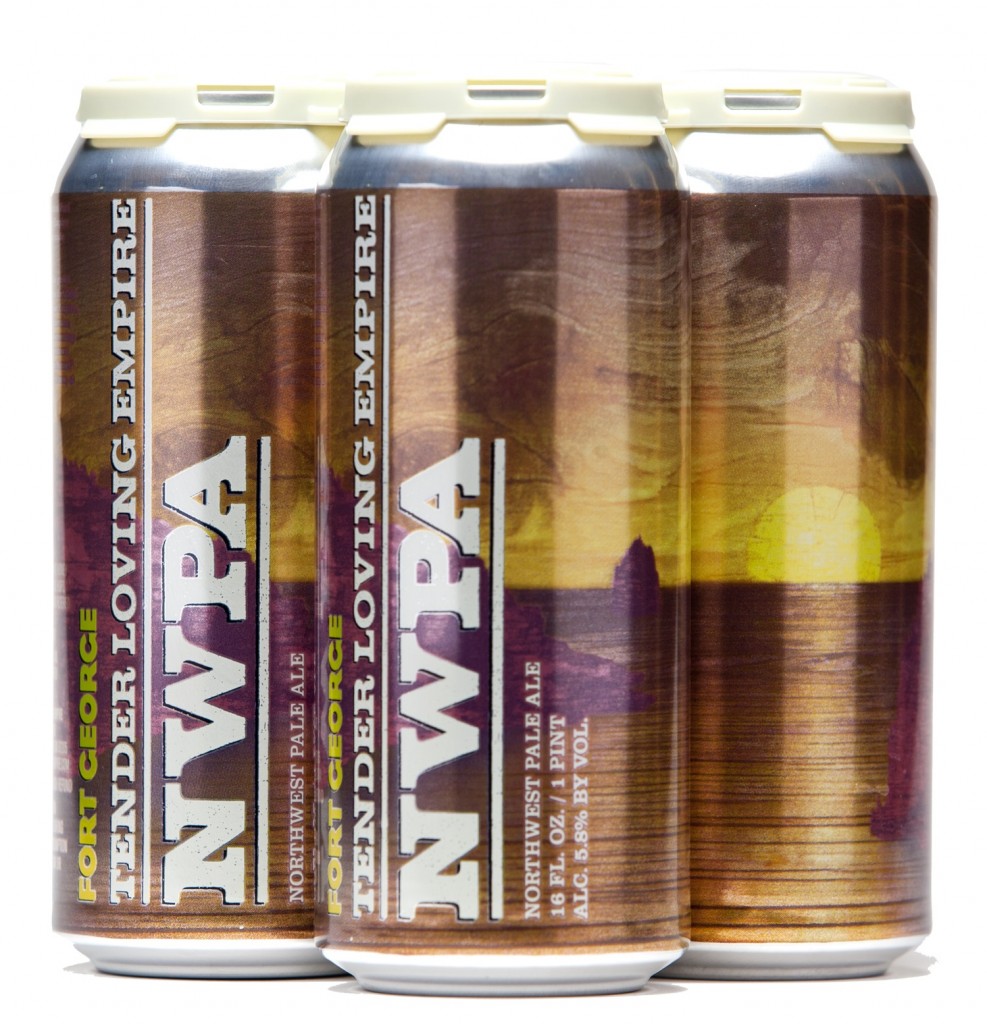 Fort George and Crown have recently partnered on a new beverage can that celebrates the local spirit of the American Northwest. Regional artists and a consignment store contributed to the can’s design, making it a unique reflection of the Oregon community and its outdoor and artistic enthusiasm.

In celebration of the spirit, flavor and sound of the Northwest U.S., Astoria, Oregon-based Fort George Brewery partnered with Tender Loving Empire, a consignment shop, screen printer and record label representing artists in the region, and CROWN Beverage Packaging North America, a business unit of Crown Holdings, Inc., on a unique marketing program.

A seasonal brew called Tender Loving Empire NWPA (Northwest Pale Ale) packaged in cans from Crown is the central component of the campaign. Tender Loving Empire designer, Andrew Sloan collaborated with Josh Berger of PLAZM design for the NWPA ‘Wooden Sunset’ can made from various wooden elements combined to look like a coastal sunset.  Fort George leveraged Crown’s printing expertise to help translate these artistic renderings into a final design that could be produced on cans while staying true to the vision of the project’s many collaborators. The cans also feature a sticker with a special code for free downloads of music from artists on the Tender Loving Empire label. The partnership took one step further with the production of four music videos that were filmed on the Columbia River from Portland all the way to around the canning line itself.   The NWPA music video series can be viewed online at Fort George Brewery Tender Loving Empire Videos.

The special ale is currently being distributed throughout Oregon, Washington, and Idaho and the packaging has been met with enthusiasm from consumers.

Fort George has been producing beer in cans since 2010, valuing its ability to cool more quickly than other formats and be stored at lower temperatures. This is an important condition for the brewer, which requires that all distributors and retailers keep its beer refrigerated to avoid damaging the carbonation and flavor. Today, packaging in cans extends beyond the Tender Loving Empire NWPA: five of Fort George’s mainstays (nicknamed the “Fort 5”) are also packaged in cans. The ‘Fort 5’ group includes 1811 Lager, Quick Wit, Cavatica Stout, Vortex IPA and Sunrise Oatmeal Pale Ale; the canned ‘Seasonals’ will all be collaborations of some sort, extending the definition of the collaborative nature of craft brewing.

“When it comes to canning our beers, we wanted to work with a partner that offered quality packaging but was also flexible enough to support us in some of our more complex collaborations, like this one,” said Brian Bovenizer, Ambassador of Marketing Ambiance, Fort George Brewing Company. “Crown’s support was critical in bringing this seasonal ale to life and leveraging the packaging format to its best advantage.”

The spirit of collaboration at Fort George continued with the launch of 3-Way IPA in mid-July. Developed by  – Fort George, Lompoc, and Gigantic – three well-known brewers in the Northwest, the brew was designed to be a more refreshing IPA for the summer months. In the spirit of collaboration, Fort George is teaming up with a local retail store, Next Adventure that sells outdoor equipment to create a brew enjoyed during outdoor activities like kayaking, also packaged in cans from Crown. The “mixed-adventure” marketing approach is intended to demonstrate the versatility of the beverage can and to connect with consumers’ favorite activities.

“At Crown, we are always enthusiastic about working with and supporting craft brewers in identifying new ways to engage consumers and build brand loyalty,” commented Brian Thiel, Craft Brand Manager. “Cans are the ideal choice for consumers who value the distinct flavor and identity of their favorite beers and we’re proud to have collaborated on a mixed-marketing endeavor that brings together all the unique aspects of the craft brewing culture that people enjoy.”

To learn more about the benefits of metal packaging for the craft brew industry, see http://www.crowncork.com/craftbrew or visit https://www.facebook.com/Crown.Craft.Brew.Crew

About Crown Holdings, Inc.
Crown Holdings, Inc., through its subsidiaries, is a leading supplier of packaging products to consumer marketing companies around the world. World headquarters are located in Philadelphia, PA. For more information, visit www.crowncork.com.