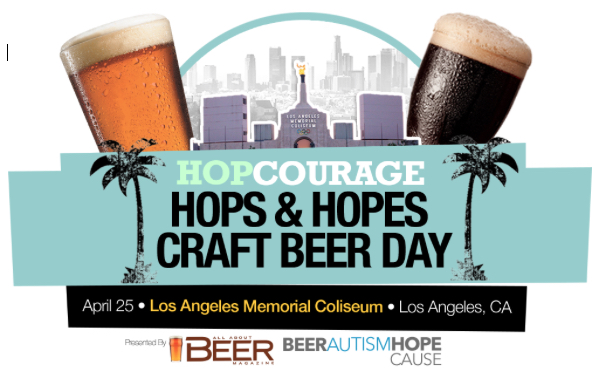 Monday, February 23, 2015 (Los Angeles, CA) Beer Autism Hope (a registered 501(c)3 charity) and All About Beer Magazine announce the inaugural Hops & Hopes Craft Beer Festival set for Saturday, April 25th at the legendary Los Angeles Memorial Coliseum. The festival is a craft beer celebration unlike any other with the biggest names in beer gathering from across the nation for a day to give back. Craft beer fans will get the chance to taste brews from America’s best breweries, meet brewing legends, celebrities and take part in craft beer masters symposiums hosted by All About Beer Magazine’s John Holl.

“Two years ago Lance overcame incredible odds to leave home on his own for the first time at fifty-five-years-old. On Hops & Hopes Craft Beer Day his courage will bring him centerstage at a festival benefiting autism in his honor – surrounded by thousands at one of the nation’s most revered stadiums – it’s unbelievable.” stated Aaron Rice, Director of the Beer Autism Hope Cause.

•    live streamed worldwide from the All About Beer Magazine Stage.
•    The event will be filmed for the finale of the highly anticipated Lance’s Brewery Tour documentary.
•    The event will feature special guests: legends in brewing, autism advocates, celebrities and more.
•    During April hundreds of breweries, charities and individuals will be holding Beer Autism Hope events to raise support and awareness for autism. Hops &

Hopes Craft Beer Day is the culmination of the largest autism outreach movement ever embraced by the American brewing industry.

Beer Autism Hope is a registered 501(c)(3) charity founded in honor of Lance Rice dedicated to promoting the beauty of autism, assisting the autism community and providing support for children and adults with disabilities to pursue their dreams in education, career, art and life. Beer Autism Hope is made possible through the generosity and support of the American brewing industry, donations and public support.