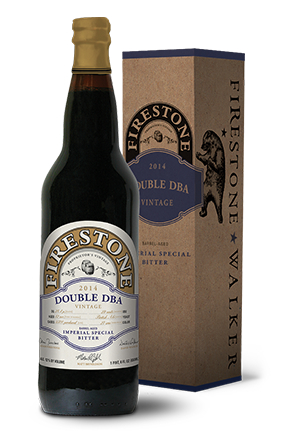 “The 2014 Double DBA is a big and complex beer that still offers the balance and drinkability that are the hallmarks of DBA,” said Brewmaster Matt Brynildson. “This vintage is outstanding, so Double DBA is leaving us on a high note.”

He added, “This beer has served us well, but there’s a finite amount of space and brewing capacity dedicated to our barrel-aged beers. In order to brew and share new barrel-aged beers, we need to rotate some out, starting with Double DBA. So get it while you can.”

Other beers in the brewery’s barrel-aged program include Bravo, Helldorado, Parabajava, PNC, Saucerful of Secrets and Brownie Wine—but it remains to be seen which will replace Double DBA in 2015.

As with previous vintages, the 2014 Double DBA imperial special bitter is Firestone Walker’s flagship DBA brewed at double strength, using twice the amount of malts and hops. As with the regular DBA, the 2014 Double DBA was partially fermented in a union of new American oak barrels. After fermentation, the beer was racked and returned to the union barrels as well as bourbon barrels, where it aged for one year. The barrel mix for the 2014 Double DBA included vessels from Woodford Reserve, Elijah Craig and Four Roses.

The 2014 Double DBA is limited to 3,500 cases of 22-ounce bottles. It will be available in select markets across the United States starting this month. The suggested retail is $16.99.

While Double DBA may not see the bottle again, it lives on in mysterious ways. Double DBA is the base beer for Reginald Brett, a bretted barrel-aged ale to be released later this year from Barrelworks, Firestone Walker’s dedicated wild (a.k.a. sour) yeast facility.

And in a new collaborative twist, the bourbon barrels used to mature the 2014 Double DBA are being shipped to Scotland, where Tullibardine distillery will use them for aging single malt scotch whisky.