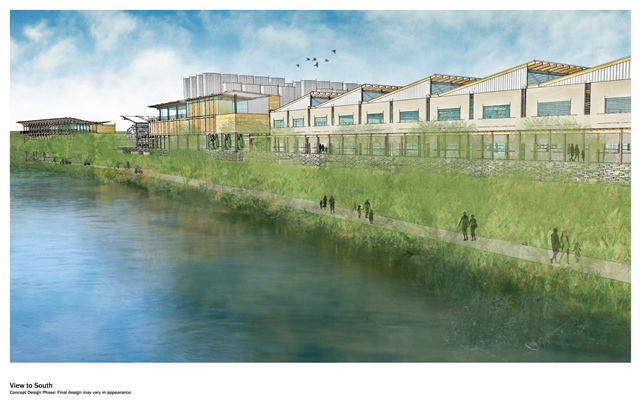 Ft. Collins, Colo., April 17, 2014 – Going up! New Belgium Brewing is officially breaking ground and starting construction on its second brewery—a 133,000 SF brewery and tasting room. At full build out, New Belgium will brew 500,000 barrels annually and support upwards of 140 jobs. The groundbreaking includes a private ceremony on May 1 and a public celebration on May 2.

“Over the last two years, we’ve really enjoyed getting to know this community and we have developed strong partnerships with businesses, non-profits, government agencies and neighbors,” said New Belgium CEO and co-founder, Kim Jordan. “We’re investing in greenways and all these amazing programs that our partners have established. We’re grateful to be part of this city and for our partnerships, and are incredibly excited to get this off the ground.”

New Belgium’s brewery and Liquid Center (tasting room) location, an 18-acre site along the French Broad River in West Asheville, was designated as a brownfield site, having a history of uses that necessitated site clean-up prior to building. New Belgium worked with North Carolina’s brownfield program to invest in and remediate the site and improve the area.

“While brownfield remediation isn’t exactly sexy work, it was important to our employee owners to improve a site from an environmental perspective,” said Jay Richardson, New Belgium’s General Manager in Asheville. “We’re rounding the corner and it’s exciting to see the site taking shape. Starting in May, we’ll see buildings going up and things will really be transformed.”

The site has a rich history in the neighborhood with many different uses in the past, including an auto salvage shop and stockyard, a location for circus performances and even auctions. The buildings on the site provided New Belgium with materials to reuse in Asheville’s brewery and Liquid Center. Those materials include: steel trusses, pine and oak beams, barn doors, metal roofing and siding, and oak flooring.

“Rather than send thousands of pounds of materials to the landfill, we worked with a great local partner salvaging wood, sheet metal and other materials to repurpose for future use,” said Richardson. “We plan to reuse about 65-85% of those elements in the new buildings and plan to find a way to make the salvaged items we don’t use available to the community.”

New Belgium became 100% employee owned in January 2013 in anticipation of bringing on new employees in Asheville. With a 93% employee retention rate, new employees at the Asheville brewery, Liquid Center and distribution center can expect to make between $27,500 and $60,000 plus benefits.

Be part of the Celebration: